An acid is a substance that ionizes in water to give hydrogen ions as the only positively charged ions in solutions.

Acid can be defined as a substance that react with a bass to form a salt and water only. 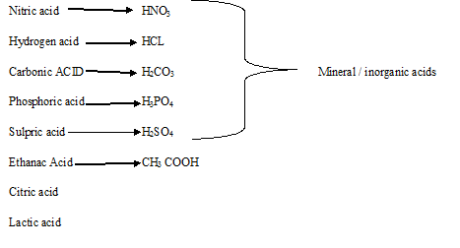 Ph is the concentration of hydrogen ions in a solution.

It is the number of ionisable hydrogen atoms in one molecule of acid.

There are three types of acids normally;

This is called neutralization reaction

Basicity of an acid;

it is the  number  of  hydrogen  ion6  released  by molecule  of  the  acid  on  complete  dissociation   in  water.

(An acid with a basicity of none) Are acids which dissociate to given only one hydrogen ion per molecule of the acid? E.g. HCL (aq) Hydrochloric acid (strong acid).

(Acids with abasicity of two )These contain two ionisable hydrogen atom per molecule of the acid.

(Acids with a basicity of three)These contain three ionisable hydrogen atoms per molecule of the acid e.g. Phosphoric acid H3PO4

This is an acid which fully ionized in dilute aqueous solution.

Are acids which are only slightly ionized (slightly dissociated) in dilute aqueous solution?

Examples of acids prepared by this method are;

An acid can be defined as hydrogen ion donor.

An alkali is a soluble base. The commonest solvent is water

Examples of alkali are;

Insoluble bases are not alkali

Strong alkalis are electrovalent and are completely ionized in aqueous solution and in the solid state.

Weak alkalis; bonding in these alkalis is covalent and they exists an molecule. They are only slightly ion sable in dilute aqueous solution and their ionization is irreversible

PH scale of acidity or Alkalinity.

The pH scale is a scale of number from 0to 14 to express acidity or alkalinity. PH is related to hydrogen ion concentration. 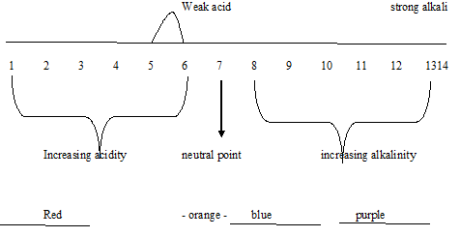 PH of 7 represents neutral point – This is the pH of distilled water.

Solutions which have pH value below 7 are acidic; most fruit juices are weak acid have value of about 6 to 5.

Do not show weather the acid is strong or weak .A universal indictor, enables us to density solutions as neutral, weak and strong bases or acids. It has a chart with different coloure which match with the number or pH values.

There are four classes of oxides

Are oxides of non metal which dissolve in water to give acidic solution?

Oxides of phrosphous dissolve in water to give acidic solution

Alkalis are bases which are soluble in water eg sodium oxide.

When they dissolve in acids they behave as bases and in alkalize as acids.

It is a salt in which all the ioniseble hydrogen atoms of the acid have been replaced by a metal or ammonium group. Normal salt don’t contain hydrogen from the acid

Monobasic acids cannot form salts because they contain only one ionisable hydrogen atoms.

An acid salt is one which contains some ion able hydrogen atoms from the acid.

An acid salt is one which is capable of further ionization in aqueous solution to give hydrogen ions.

The method used in the preparation of a given salt depends on whether the salt is soluble or insoluble in water.

Table of soluble in soluble salts 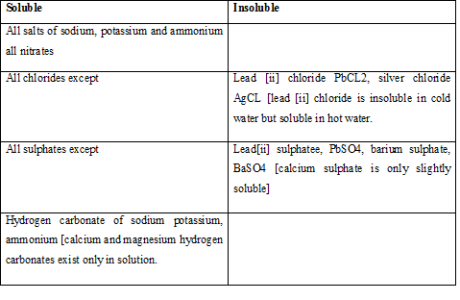 Methods of preparation of salts

By heating iron in dray chloride

Sodium chloride, NaCL and magnesium chloride, Mg CL2 can be prepared by heating the respective metal in the atmosphere of chlorine gas.

Reacting an acid with a metal or an insoluble oxide, hydroxide, carbonate.

In the preparation of soluble salts of copper, lead, iron and zinc. The general procedure is;-

Dilute sulphric acid is poured in a glass beaker and zinc granules are added to the acid. Effervescence occurs.

If the reaction is a low a little copper [ii] sulphate solution is added as a catalyst and the reactants are warmed.

When the reaction steps, more zinc is added to make sure that the acid is not left in considerable amount excess zinc granules and solid impurities are filtered off. The filtrate is gently heated to concentrate it.

The concentrate filtrate is then called. White crystals of zinc sulphate form. They are filtered off, wasted with distilled water they are dried between filter papers

Copper [ii] oxide; CuO, is added a little a a time to worm dilute sulphate sulphric acid in a glass beaker until no more dissolves. Excess copper [ii] oxide + solide impurities are filtered off. The filtrate is evaporated to concentrate it.

The concentrated filtrate is then cooled. Blue crystals of copper [ii] sulphate -5- water, CuSO4. 5H20 form. The crystals are filtered, washed with distilled water then dried in desiccators or sunshine.

Excess carbonate is filtered off and the filtrate is evaporated until crystal begins to form when it cools.The concentrated filtrate is cooled. White crystals of lead [11] nitrate form, they are flitted off, wasted with distilled water and they are dried.

Calcium chloride and calcium nitrate are deliquescent and they do not form crystals. Their solutions must be evaporated to dryness.

A known volume sodium hydroxide solution is piped into a conical flask and phenolphthalein indicator is added to give a pink liquid.

Dilute hydrochloric acid is added from the burette to sodium hydroxide solution little at a time until the solution turns calourless. The volume of the acid used is noted.

The resulting solution is discarded because it contains an indicator. Equivalent volume of the acid and alkali are now added, this time without using indicator.

The resulting mixture is evaporated to dryness using a water bath to recover sodium chloride crystals.

They are prepared by precipitation method or double decomposition method. In a double decom position reaction, anions and cat are exchanged.

The yellow precipitate is filtered off, washed with distilled water and is dried.

Barium nitrate is added to dilute sulphiric acid. A white precipitate of barium sulphate is formed

The white precipice is fettered off, washed in distilled water and dried

Lead [11] nitrate solution is added to dilute hydrochloric acid in a beaker a white precipitate of lead[s] chloride is formed.

The white precipitate is filtered off, washed with distilled water

Good crystals are obtained by dissolving the washed crystals in a minimum amount of hot water and cooling to recrytalize.

Effects of heat on some salts

When it is heated it sublimes to form gaseous ammonium chloride. On further heating the gas dissociates into ammonia and hydrogen chloride

Nitrates in group I [sodium and potassium] decompose on heating to give the nitrite of the metal and oxygen gas.

ii) Nitrates of metals lower in the reactively seems decompose to give the oxide of the metal, reddish – brown nitrogen dioxide gas and oxygen gas

Effect of heat on zinc nitrate

Zinc nitrate is a white crystalline solid, on heating a reddish – brown gas [nitrogen dioxide] and oxygen gas are given off. The residue [zinc [11] oxide is yellow when hot and white on cooling

This is the substance which dissolves in a solvent. It can be a solid, liquid or gases

Substance in excess] the solvent can be solid, liquid, or gas.

A saturated solution of a solute at a particular temperature is one which can dissolve no more solute at room temperature in the presence of undissolved solute.

This one that contains more solvent than it can hold at the same temperature in the presence of undissolved solute.

A solubility curve of a substance is a group that shows how it solubility varies with temperature.

The solubility of a solute in a solvent at a particular temperature is the number of grammes or moles of the solute required to saturate 100 grammes of solvent at that temperature.

Qualities of a good graph

17.1g of potassium chloride crystallises out

Determine the solubility of the salt.

1 gram of water was saturated by  grammes

On heating, white crystal decompose to give a reddish brown gas [nitrogendioxide and oxygen the residue is white

Nitrates of metals at the bottom of reactivity series e.g. silver and mercury decompose on heating to give the metal, nitrogendioxide and oxygen gas

Effect of heat on carbonates

Effects of heat on ammonium carbonate

The salt is very unstable on heating it decomposes to give ammonia gas, carbon dioxide + water vapour

It is a white powder, on heating it decomposes to give off a colourless gas which turns lime water milky [carbondioxide]

Cont copper [11] carbonate, Cu CO3- it is a green powder, it decomposes on heating to give a black residue [of copper [11] oxide, Cuo] and a colourless gas which turns lime water milky [carbodioxide, CO2]

Effect of heat on lead [11] carbonate, PbCO3 – it is a white powder. On heating, it decomposes to give reddish – brown a residue which turns yellow on cooling [lead [11] oxide, Pbo] and a colourless gas which turns lime water milky [ carbondioxide; CO2]

Potassium and sodium decompose on heating to give the corresponding carbonates, water and carbon dioxide gas.

It decomposes on heating to give calcium oxide, water and carbondioxide gas

Effects of heat on sulphates

Blue crystals on gentle heating, they loss water of crystallization to form a white anhydrous solid.

The crystals are pole green. On gentle heating, the crystals lose water of crystallization to form a dirty white anhydrous solid.

On strong heating sulphur trioxide gas and sulphur dioxide gas are given off. The residue is reddish – brown [iron [111] oxide].