Matter is anything that occupies space and has got weight.

In what state is matter found?

There are three states of matter

What are the differences between the three states of matter?

All matter is mode small particles.

Arrangement of particles in solids very close and regular.

In liquids the particle are further apart although they are still regular and in gases the particles are very far from one another and with no particular arrangement.

And gases have neither definite volume nor shape.

In the experiment the apparatus is set up as follows;-

Do particles in liquids move.

Experiment is set up as follows:

A glass jug was filled with water and a crystal of potassium permanganate was dropped in.

After a day or two the purple color of the potassium permanganate is evenly distributed in the gas jar of water.

Do particles in gases move?

A drop of bromine was placed at the bottom of the gas jar, a gas jar slides was places on top of gas jar 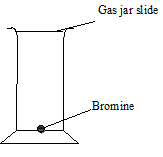 Bromine is brown liquid which vaporizes easily at room temperature. The gaseous particles move very fast and quickly the brown color of bromine is seen to fill the gas jar.

When a gas changes to liquid is called condensation

Gases are easily compressed solids and liquids are not easy to compress.

Arrange of particles in;-

What happens when substances are heated?

Investigating the effect of heat on substances 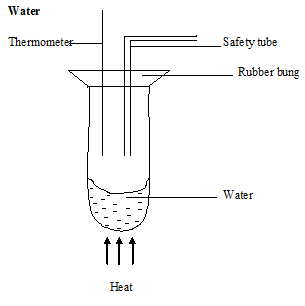 However, some solids remain uncharged when heated

Boiling point of any liquid

The boiling point of a liquid depends on the atmospheric pressure with in turn depends on altitude.

Boiling point of liquid is the temperate of which the vapor pressure of a liquid is equal to the surrounding or external pressure.

Finding the boiling point of a liquid which burns 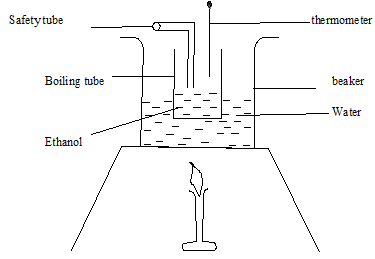 The temperature of ethanol kept rising until it remained at 74.5oc

Supposing the inflammable liquid had a higher boiling point than that water, how is it heated?

In that case oil or constructed sulphiric acid is used instead of water.