Is plant extract a single substance

Leaves were pounded in monster until they were very tender/soft. Then acetone (po) was added and mixture stirred and the extract was poured into the test tube.

Is black ink a single substance?

What was the color plant extract?

What was observed on the filter paper

What color was the ink?

How many colors can you see?

This process of separating mixture is called chromatography. The punch is a chromatogram.

How does chromatography work?

How to separate a mixture of Iodine and common salt

The mixture in heated in a beaker as follows. 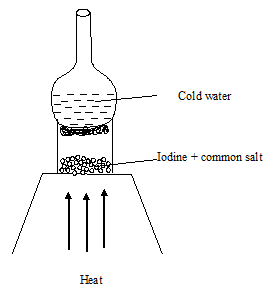 When a mixture was heated, dense purple fumes filled the beaker. Then heating was discontinued and the apparatus was left to cool. Grayish diamond crystals were seen at the bottom of the flask.

What color is common salt?

What is seen when common salt is heated?

It isn’t affected by heat

What color is iodine?

It forms a purple vapor

What is observed when it is cool?

Grey crystals form at the walls of the test tube.

What was the use of the cold water in the flask?

To cool the purple vapor

This method of separating two solids in called sublimation.

Sublimation is used to purify Iodine. After separating the mixture, how do you get the purity of the components?

How do you make solid particle in a suspension settled quickly.

Use a centrifuge the process can be used in getting cream free milk.

Determining the melting point of a solid the temperature of Naphthalene is 110oc at a time after 30 seconds it is 89oc, another30 seconds, 82oc, and then 80ocfor another 30 seconds, then 79oc. 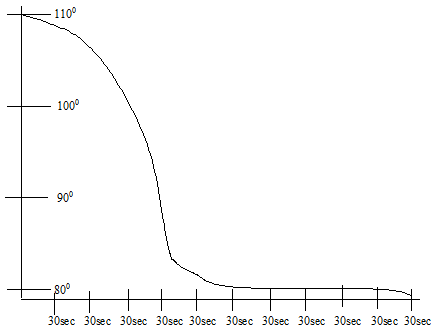 When determining the melting point of naphthalene

The apparatus was set up as in the diagram. 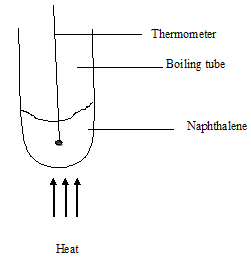 It was not easy to decide which one was the melting point the temperature when the naphthalene starts melting or when half or all of it has melted.

Do impurities change the melting point of a solid?

The experiment to determine the melting point of naphthalene was repeated with a little oxalic acid added as an impurity. 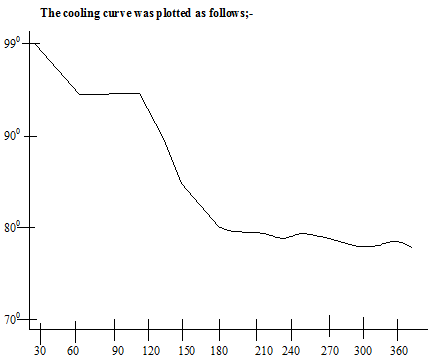 From the second cooling curve the melting point of naphthalene is

The video below shows a paper chromatography experiment conducted to separate the different pigments present in a wet erase marker.