This unit is about sexual reproduction in plants mostly in flowering plants.

Sexual reproduction in flowering plants centres around the flower. Within a flower, there are usually structures that produce both male gametes and female gametes.

AN ILLUSTRATION OF A FLOWER STRUCTURE 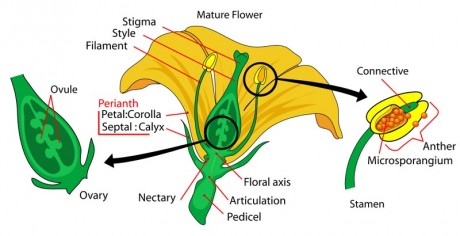 Development of the ovule and female gamete 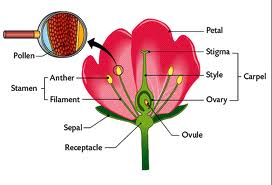 Inside the ovary there may develop one or more ovules. Each ovule begins life as a small projection into the cavity of the ovary. As it grows and develops it begins to bend but remains attached to the ovary wall by a placenta.

At the start, the ovule is a group of similar cells called the nucellus. As it develops, the mass of cells differentiates to form an inner and an outer integument, surrounding and protecting the nucellus within, but leaving a small opening called the micropyle.

Development of the male gamete

AN ILLUSTRATION SHOWING THE REPRODUCTION PROCESS. 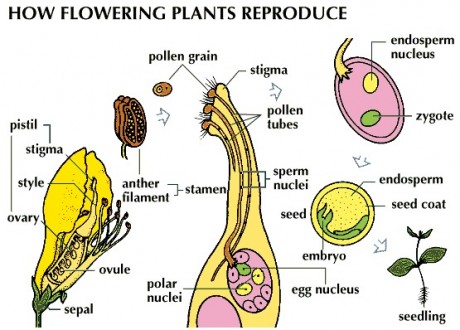 Many plants favour cross-pollination, so pollen must be transferred to the stigma of another plant if sexual reproduction is to take place. Some flowers rely of the wind to carry pollen grains others rely on insects.

A potential drawback is that both gametes come from the same parent. If the plant is well adapted to a stable environment, the production of uniform offspring may be advantageous. However, inbreeding will result and if there are disadvantageous recessive characteristics in the parent, they are much more likely to be exposed than if the plant cross-pollinates.

Cross-pollination is less reliable and more wasteful than self-pollination, but it is genetically favourable because genes are transferred and variation increases.

For those plants that cross-pollinate, some are wind pollinated, others are insect pollinated. Here are some of the differences:

If the pollen grain lands on a compatible stigma, a pollen tube will grow so that eventually the egg cell, hidden away in the embryo sac, can be fertilised. A tube emerges from the grain, its growth being controlled by the tube nucleus at the tip of the tube. It may grow downwards in response to chemicals made by the ovary (a response known as chemotropism).

During the growth and extension of the tube, the generative nucleus, behind the tube nucleus, divides by mitosis to produce 2 male haploid gametes. The pollen tube enters the ovule through the micropyle and penetrates the embryo sac wall. The tip of the tube bursts open, the tube nucleus dies and what follows is called double fertilisation.

1 male gamete fuses with the egg cell to produce a diploid zygote.

1 male gamete fuses with both the polar nuclei to produce the triploid primary endosperm nucleus.

Immediately after fertilisation, the ovule is known as the seed.

When conditions are right, the seed will take up water through the micropyle by imbibition. This triggers the beginning of the growth of the seed.

The cell swells and the testa splits. With the addition of water, large molecules of carbohydrate, protein and fat can be hydrolysed (broken down) to produce substances for respiration.

The water activates such enzymes as a-amylase to catalyse this digestion.

The growing embryo releases a hormone called gibberellic acid and some enzymes are produced and released in response to this.

The soluble products of digestion are delivered to the cotyledons, root and shoot. They respire aerobically and grow in size.

By the time the food store has been used up, the shoot has grown enough to push the first leaves into the sunlight. Photosynthesis can then start.