This unit is about Mitosis and Meiosis the terms used in cell division as explained below.

According to the Cell Theory, all living cells arise from preexisting cells. The process whereby new cells are formed is called cell division or mitosis, which involves the division of the cell’s nucleus (karyokinesis) and the cytoplasm (cytokinesis). Mitosis results in the production of two genetically identical daughter cells. Formation of an adult organism from a fertilized egg, regeneration, and the repair of tissues are all accomplished by mitosis.

In animals that reproduce sexually, the production of sex cells or gametes (i.e., eggs and sperm), requires that each parent’s chromosomes be reduced by one half the normal number. Reducing the parent’s chromosome number from the diploid (2n) number (46 in humans) to the haploid (n) number (23 in humans) is accomplished by a type of cell division known as meiosis.

Prior to the initiation of mitosis or meiosis, the cell must duplicate its chromosomes and manufacture the materials needed for cell division. This is accomplished in a phase that precedes cell division known as interphase. Interphase can be divided into three phases.

In the first, called the Gl phase, the cell carries out its basic functions and performs specialized activities. In the second period of interphase, the S phase, each chromosome in the nucleus is replicated so that there are now two identical copies of each chromosome. Identical chromosomes are attached to each other by way of a centromere. When attached by their centromeres, chromosomes are referred to as chromatids. In plants, the mitotic spindle is also formed during the S phase.

In animal cells, a pair of centrioles duplicates to form two pairs of centrioles. Like the mitotic spindle in plants, the centrioles will form spindle fibers. Spindle fibers are composed of microtubules and are used to pull the duplicated chromosomes apart during cell division. In the third period of interphase, the G2 phase, proteins and structures that will be used during mitosis or meiosis, are synthesized. After the G2 phase has been completed, the cell can then undergo mitosis or meiosis.

Mitosis is a form of eukaryotic cell division that produces two daughter cells with the same genetic component as the parent cell. Chromosomes replicated during the S phase are divided in such a way as to ensure that each daughter cell receives a copy of every chromosome. In actively dividing animal cells, the whole process takes about one hour.

Although mitosis is a continuous process, it is divided into four phases for ease of understanding.

During prophase, the first phase of mitosis, the chromosomes condense (shorten) and become visible when stained and viewed under a microscope. During the latter part of prophase, the nuclear membrane disappears and the newly formed spindle fibers attach to a region of the centromere called the kinetochore.

During metaphase, the spindle fibers move the replicated chromosomes to the middle of
the cell where they line up in single file along the equatorial plane.

During anaphase, the sister chromatids are “pulled” apart (separated) and move toward
opposite poles of the cell. The separated chromatids are now called daughter
chromosomes.

During telophase, the last phase of mitosis, the spindle apparatus disappears and nuclei reform around each set of daughter chromosomes. Cytokinesis also occurs during telophase. In animal cells, a cleavage furrow forms and eventually divides the cytoplasm in half among the two daughter cells. In plant cells, cytokinesis is accomplished with the formation of the cell plate. 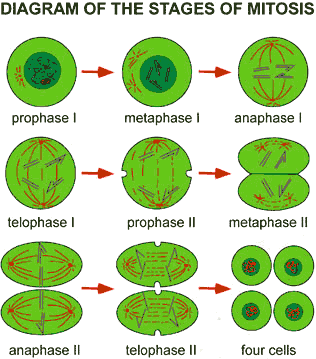 THE FOLLOWING VIDEO ALSO TELLS YOU MORE ABOUT IT.

Meiosis is used for sexual reproductions.  It consists of two nuclear divisions {meiosis I and meiosis II) and results in the production of haploid cells called gametes. Because the chromosome number is reduced by one half, meiosis is sometimes referred to as reduction division. Before meiosis can proceed, however, homologous chromosomes must first pair together, a process known as synapsis. This is the time that crossing over can occur. Crossing over results in the exchange of genetic material between homologous chromatids. As in mitosis, meiosis is a continuous process.

Meiosis I separates the pairs of homologous chromosomes.

In Meiosis I a special cell division reduces the cell from diploid to haploid.

The homologous chromosomes pair and exchange DNA to form recombinant chromosomes. Prophase I is divided into five phases:

Homologous pairs of chromosomes (bivalents) arranged as a double row along the metaphase plate. The arrangement of the paired chromosomes with respect to the poles of the spindle apparatus is random along the metaphase plate. (This is a source of genetic variation through random assortment, as the paternal and maternal chromosomes in a homologous pair are similar but not identical. The number of possible arrangements is 2n, where n is the number of chromosomes in a haploid set. Human beings have 23 different chromosomes, so the number of possible combinations is 223, which is over 8 million.)

The chromosomes become diffuse and the nuclear membrane reforms.

The events of Meiosis II are analogous to those of a mitotic division, although the number of chromosomes involved has been halved. 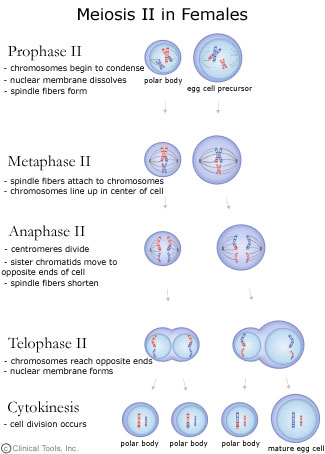