This unit is about genetics showing how genes are formed.

Genetics is the study of genes, heredity, and variation in living organisms. It is generally considered a field of biology, but it intersects frequently with many of the life sciences and is strongly linked with the study of information systems.

Genetics includes the study of heredity, or how traits are passed from parents to offspring.   The topics of genetics vary and are constantly changing as we learn more about the genome and how we are influenced by our genes.


Heredity is a biological process where a parent passes certain genes onto their children or offspring. Every child inherits genes from both of their biological parents and these genes in turn express specific traits. Some of these traits may be physical for example hair and eye color and skin color etc. On the other hand some genes may also carry the risk of certain diseases and disorders that may pass on from parents to their offspring. 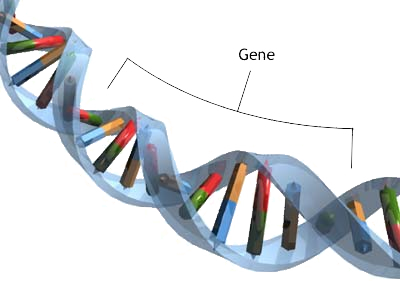 The modern working definition of a gene is a portion (or sequence) of DNA that codes for a known cellular function or process (i.e. the function “make melanin molecules”).

A single gene often interacts with neighboring genes to produce a cellular function and can even be ineffectual without those neighboring genes. This can be seen in the same way that a ‘word’ may have meaning only in the context of a ‘sentence.’ A series of nucleotides can be put together without forming a gene (non coding regions of DNA), like a string of letters can be put together without forming a word (e.g. udkslk). Nonetheless, all words have letters, like all genes must have nucleotides.

A quick heuristic that is often used (but not always true) is “one gene, one protein” meaning a singular gene codes for a singular protein type in a cell (enzyme, transcription factor, etc.)

The amino acids in a protein determine how it folds into its unique three-dimensional shape, a structure that is ultimately responsible for the protein’s function. Proteins carry out many of the functions needed for cells to live. A change to the DNA in a gene can change a protein’s amino acid sequence, thereby changing its shape and function and rendering the protein ineffective or even malignant (e.g. sickle cell anemia). Changes to genes are called mutations.

The genes lie within the chromosomes. Humans have 23 pairs of these small thread-like structures in the nucleus of their cells. 23 or half of the total 46 comes from the mother while the other 23 comes from the father.

At one point along their length, each chromosome has a constriction, called the centromere. The centromere divides the chromosomes into two ‘arms’: a long arm and a short arm. Chromosomes are numbered from 1 to 22 and these are common for both sexes and called autosomes. There are also two chromosomes that have been given the letters X and Y and termed sex chromosomes. The X chromosome is much larger than the Y chromosome. 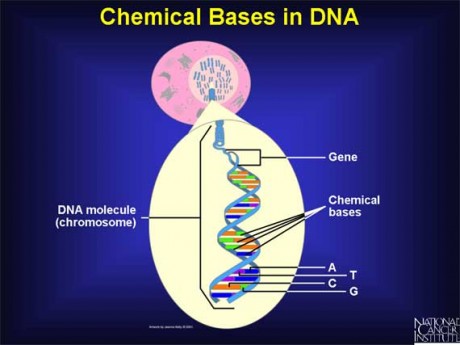 The genes are further made up of unique codes of chemical bases comprising of A, T, C and G (Adenine, Thymine, Cytosine and Guanine). These chemical bases make up combinations with permutations and combinations. These are akin to the words on a page.

These chemical bases are part of the DNA. The words when stringed together act as the blueprints that tells the cells of the body when and how to grow, mature and perform various functions. With age the genes may be affected and may develop faults and damages due to environmental and endogenous toxins.

When the egg joins with the sperm, the resultant baby has 46 chromosomes (with either an XX in a female baby or XY in a male baby).

Each gene is a piece of genetic information. All the DNA in the cell makes up for the human genome. There are about 20,000 genes located on one of the 23 chromosome pairs found in the nucleus.

To date, about 12,800 genes have been mapped to specific locations (loci) on each of the chromosomes. This database was begun as part of the Human Genome Project. The project was officially completed in April 2003 but the exact number of genes in the human genome is still unknown.

It is important to understand the difference between genotype and phenotype. For example, for most of the genes we will be discussing, an organism with the genotype of, say, BB and an organism who is Bb both have at least one dominant allele for that gene, and thus, would both express/show/be the dominant phenotype. If, for example, this was a gene for human eye color, then “B” would represent the dominant allele which codes for “make brown eyes,” and “b” would represent the recessive allele which codes for blue eyes (technically, more like, “we don’t know how to make brown,” so blue is the “default”). Thus, people whose genotypes are either BB or Bb both have instructions for “make brown,” so the phenotypes of both are brown eye color.

As another example where many people get confused, an individual’s sex is a phenotype, not a genotype! We can talk of a person as having either two X chromosomes (XX) or one X and one Y chromosome (XY). Those are, essentially, genotypes, and there are also a few people who have genotypes such as X (also called XO), XXX, or XXY. Those X and Y chromosomes contain/consist of a number of genes, and factors such as what alleles a person has for each of those genes, how those alleles are expressed, and how that gene expression affects/influences various body processes will all come together to produce that phenotype which we call a person’s sex. 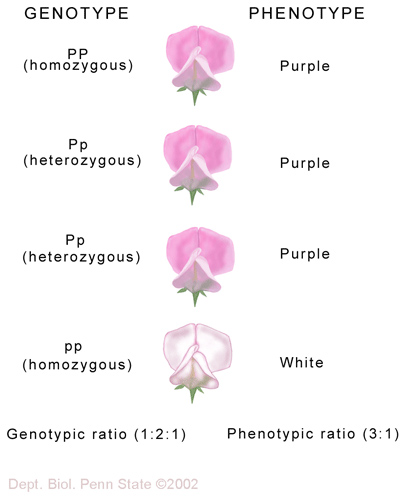 However, while uncommon, it is entirely possible that due to a mutation in some gene, somewhere, that codes for some enzyme or hormone, a person with 2 X chromosomes (XX) can have a male phenotype; can, clearly and unambiguously, be male.

Similarly, while also not very common, it is also possible, due to a mutation in some gene, somewhere, that codes for some hormone or enzyme, that a person with an X and a Y chromosome (XY) can have a female phenotype; can, clearly and unambiguously, be female. Interestingly, because of differences in how the genes/alleles are expressed, the XXY combination typically results in a male in humans but results in a female in fruit flies.

Our culture, our way of thinking, is so locked into having/needing to choose between male and female as the only two options, that while in the “unambiguous” cases just mentioned where a person’s expressed phenotype obviously fits our preconception of maleness or femaleness even if their genotype/chromosomes are different from what we might think (and of which we would not even be aware unless we were that person’s doctor — and maybe not even then), on the other hand, people whose bodies don’t exactly and neatly fit into one of those two categories are lumped together in a group and labeled as “intersex.”

Typically, at birth, their parents are advised by medical personnel to choose whether they wish to bring this child up as a “boy” or a “girl,” and may even be pressured into having cosmetic surgery performed on the child to make the child look more like the chosen sex assignment, yet it frequently happens as the child grows up, due to the influence of internal factors such as hormones, etc., that “he” or “she” does not “feel like” the sex which the doctors assigned/labeled at birth.

On the other hand, if parents try to be more neutral and let the child make that choice when and if the child decides to do so, that tends to expose the child to a lot of ridicule from classmates and even other adults.

We tend to think of genes that control what an organism looks like, etc., but genes can also control behavior of animals. For example, bird songs and other courtship rituals are under genetic control. The most successful competitors live and mate and pass on their genes. On a different subject, many of our horticultural plant varieties are polyploid plants.

Typically, like us, plants are diploid. Horticulturists have figured out ways to manipulate plants and make triploid or tetraploid plants. Typically these plants are larger and/or have bigger or more ruffled flowers and/or larger seeds.