This unit is about Variation and Evolution in the genetic system.

New species arise from pre-existing species as a result of modification through adaptation or formation of varieties. This occurs through a sequence of changes or succession from generation to generation and from simple forms to complex forms.

Evolution is a study that attempts to explain the origin of life and the relationships between living things that exist in the universe. This is done by defining theories of life.  This explains how new species developed from the pre-existing species, and it should help you to relate the day-to-day life processes that cause present-day evolution and economic development.

This applies to other animals like pigs, goats and poultry birds, among others, through selection based on what is termed as good qualities.  Likewise, plants like cassava, sweet potatoes, matooke, beans, peas, pumpkin, maize, pineapples, passion fruit, oranges and vegetables like cabbage, carrots and tomatoes can be artificially selected on the basis of qualities such as size, yield, growth rate and pest resistance.

This is done to improve the yield quality and quantity, and to conserve the good features of the original species, while at the same time promoting the formation of new varieties.

Hybrids of most available passion fruits, bananas, etc. are a result of selective breeding by humans.  Present-day varieties have been selected for better quality (green evolution) in terms of size, growth rate, yield and pest or disease resistance and this has promoted economic development.

Evolution is the consequence of the following factors:

The variation of organisms within a species increases the likelihood that at least some members of the species will survive under changed environmental conditions.

The great diversity of organisms is the result of billions of years of selection for favorable variations that has filled available niches of our planet with life forms.

Without genetic variation, some of the basic mechanisms of evolutionary change cannot operate.

There are three primary sources of genetic variation, which we will learn more about:

Genetic shuffling is an important source of variation.

The risk of extinction or population decline because of low genetic variation is predicted by evolutionary theory. Scientists have not yet found any absolutely clear-cut examples of this in endangered species today, but they continue to investigate the possibility.Evolutionary theory suggests that, for the long-term survival of a species, we need to conserve not just individual members of a species, but also a species’ ability to evolve in the face of changing environmental variables—which means conserving individuals and genetic variation.

A case study of the cheetah, which has famously low genetic variation, suggests the sorts of dangers that are possible. When the captive felines at an Oregon breeding colony for large cats were exposed to a potentially deadly virus, it swept through the cheetah population, killing about 50% as a direct or indirect result of the virus—but none of the lions even developed symptoms.

Although this example is by no means conclusive, it is possible that the cheetahs’ low genetic variation—unlike the lions’ more extensive variation—meant that none of them had the right immune system gene variants to fend off the disease. Similar epidemics could sweep through other vulnerable species with low genetic variation, increasing their chance of extinction.

HOW DOES GENETIC VARIATION OCCUR IN A POPULATION

Genetic variation occurs through sexual reproduction. Due to the fact that environments are unstable, populations that are genetically variable will be able to adapt to changing situations better than those that do not contain genetic variations.

Mutations are changes in the DNA sequence of a cell’s genome. When mutations occur, they can either have no effect, alter the product of a gene, or prevent the gene from functioning. Based on studies in the fly Drosophila melanogaster, it has been suggested that if a mutation changes a protein produced by a gene, this will probably be harmful, with about 70% of these mutations having damaging effects, and the remainder being either neutral or weakly beneficial. 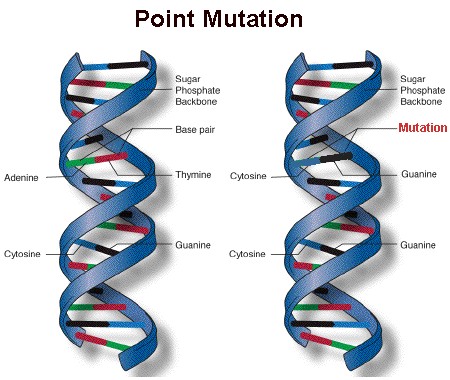 Mutations can involve large sections of a chromosome becoming duplicated (usually by genetic recombination), which can introduce extra copies of a gene into a genome. Extra copies of genes are a major source of the raw material needed for new genes to evolve. This is important because most new genes evolve within gene families from pre-existing genes that share common ancestors. For example, the human eye uses four genes to make structures that sense light: three for colour vision and one for night vision; all four are descended from a single ancestral gene.

New genes can be generated from an ancestral gene when a duplicate copy mutates and acquires a new function. This process is easier once a gene has been duplicated because it increases the redundancy of the system; one gene in the pair can acquire a new function while the other copy continues to perform its original function. Other types of mutations can even generate entirely new genes from previously non coding DNA.

The generation of new genes can also involve small parts of several genes being duplicated, with these fragments then recombining to form new combinations with new functions.

When new genes are assembled from shuffling pre-existing parts, domains act as modules with simple independent functions, which can be mixed together to produce new combinations with new and complex functions. For example, polyketide synthases are large enzymes that make antibiotics; they contain up to one hundred independent domains that each catalyse one step in the overall process, like a step in an assembly line.

The next major change in cell structure came when bacteria were engulfed by eukaryotic cells, in a cooperative association called endosymbiosis. The engulfed bacteria and the host cell then underwent co-evolution, with the bacteria evolving into either mitochondria or hydrogenosomes. Another engulfment of cyanobacterial-like organisms led to the formation of chloroplasts in algae and plants. 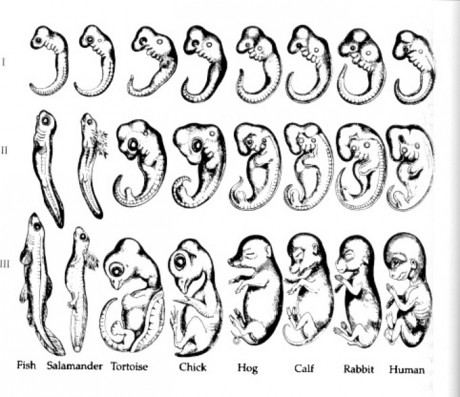 The history of life was that of the unicellular eukaryotes, prokaryotes and archaea until about 610 million years ago when multicellular organisms began to appear in the oceans in the Ediacaran period. The evolution of multicellularity occurred in multiple independent events, in organisms as diverse as sponges, brown algae, cyanobacteria, slime moulds and myxobacteria.

Soon after the emergence of these first multicellular organisms, a remarkable amount of biological diversity appeared over approximately 10 million years, in an event called the Cambrian explosion. Here, the majority of types of modern animals appeared in the fossil record, as well as unique lineages that subsequently became extinct. Various triggers for the Cambrian explosion have been proposed, including the accumulation of oxygen in the atmosphere from photosynthesis.