This unit is about plant responses to stimuli.

Auxins stimulate and inhibit growth of plant parts in different concentrations.  For example, growth in shoots is stimulated by a higher concentration of auxins than that for growth in the roots. Auxins also bring about apical dominance.  Lateral bud growth is inhibited in the presence of the shoot tips.  The terminal bud produces and releases hormones/auxins that move downwards and have the effect of inhibiting the growth of the lateral buds.

Hence there is no branching.  When the terminal buds are removed by pruning, the lateral buds are released from apical dominance. Application of a weak solution of auxin to a cutting from a woody stem causes roots to develop more quickly than they otherwise would.  This knowledge can be applied in horticulture to give services and to generate income.

Plants also have the means to respond to their environment in order to successfully live. They use chemicals similar to the endocrine system to accomplish this.

The Regulation of Growth

Plants’ growth is controlled by many factors. Some of the factors are environmental and climatic while others come from within the plants themselves.

Some external factors that regulate the growth of plants are light intensity, day length, gravity, and temperature.

Day length causes the plants to flower. Many other roles of day length are being studied such as fruit and seed germination, dormancy, and leaf loss.

Temperature affects the rate of enzyme reaction. Higher temperature, to a point, is best for plant growth while low temperatures are needed for some plants to flower.

A tropism is a biological phenomenon, indicating growth or turning movement of a biological organism, usually a plant, in response to an environmental stimulus. In tropisms, this response is dependent on the direction of the species. The word tropism comes from the Greek trope (“to turn” or “to change”). Tropisms are usually named for the stimulus involved and may be either positive (towards the stimulus) or negative (away from the stimulus).

Thigmotropism is the growth response of a plant to physical contact (touch). Plants that cling to physical structures such as walls exhibit positive thigmotropism. 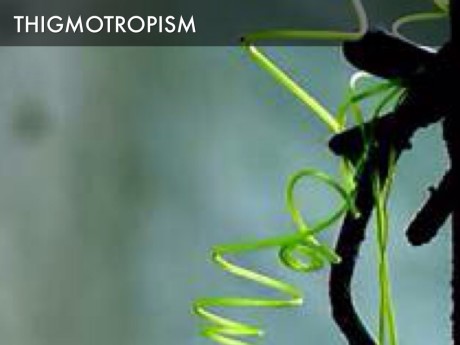 Hydrotropism is the growth response of a plant to water. Roots exhibit positive hydrotropism. 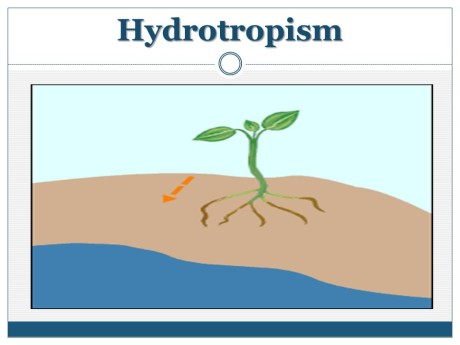 Chemotropism is the growth response of a plant to a particular chemical. Roots grow toward useful minerals in the soil but away from acids. 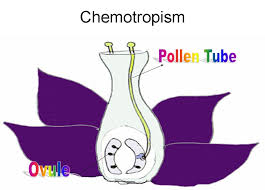 Growth regulators are chemicals that control the growth of a plant. Some of these are growth promoters while others are growth inhibitors. 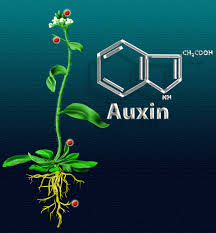 Auxins are chemicals that are produced at the meristems, young leaves, and seeds of plants. The most important auxin is indoleacetic acid (IAA). Auxins have a role in the following:

Development of the embryo- From the very first mitotic division of the zygote, auxins guide the patterning of the embryo into the parts that will become the organs of the plant:

The formation of new leaves in the apical meristem is initiated by the accumulation of auxin. Already-developing leaves deplete the surrounding cells of auxin so that the new leaves do not form too close to them. In this way, the characteristic pattern of leaves in the plant is established.

Plant shoots display positive phototropism: when illuminated from one direction, the shoot proceeds to grow in that direction.

Pollination of the flowers of angiosperms initiates the formation of seeds. As the seeds mature, they release IAA to the surrounding flower parts, which develop into the fruit that covers the seeds. Some commercial growers deliberately initiate fruit development by applying IAA to the flowers. Not only does this ensure that all the flowers will “set” fruit, but it also maximizes the likelihood that all the fruits will be ready for harvest at the same time. This process develops seedless fruit.

IAA in epidermal cells of the root initiates the formation of lateral or secondary roots. Auxin also stimulates the formation of adventitious roots in many species. Adventitious roots grow from stems or leaves rather than from the regular root system of the plant. Horticulturists may propagate desirable plants by cutting pieces of stem and placing them base down in moist soil. Eventually adventitious roots grow out at the base of the cutting. The process can often be hastened by treating the cuttings with a solution or powder containing a synthetic auxin.

Auxins cause the cells of plants to elongate because they soften the cell walls. They also stimulate enzymes that cause cell elongation.

The auxin ethane is a gas. It is made in the nodes of stems, in ripe fruits, and in decaying leaves. This auxin causes leaves and fruits to fall from trees. It causes a special layer of cells — the abscission layer — to form at the base of the petiole or fruit stalk. Soon the petiole or fruit stalk breaks free at this point and the leaf or fruit falls to the ground. It also causes fruits to colour, flavour, and ripen. It also causes plants to age.

Unlike animals, plants cannot flee from potentially harmful conditions like drought the approach of winter. They must adapt or die. The plant hormone abscisic acid (ABA) is the major player in a plant’s responses to stress.

ABA mediates the conversion of the apical meristem into a dormant bud. The newly developing leaves growing above the meristem become converted into stiff bud scales that wrap the meristem closely and will protect it from mechanical damage and drying out during the winter.

ABA in the bud also acts to enforce dormancy so if an unseasonably warm spell occurs before winter is over, the buds will not sprout prematurely. Only after a prolonged period of cold or the lengthening days of spring (photoperiodism) will bud dormancy be lifted.

Seeds are not only important agents of reproduction and dispersal, but they are also essential to the survival of annual and biennial plants. These angiosperms die after flowering and seed formation is complete. ABA plays a role in seed maturation, at least in some species, and also enforces a period of seed dormancy. As we saw for buds, it is important the seeds not germinate prematurely during unseasonably mild conditions prior to the onset of winter or a dry season. ABA in the seed enforces this dormancy. Not until the seed has been exposed to a prolonged cold spell and/or sufficient water to support germination is dormancy lifted.

Some 90% of the water taken up by a plant is lost in transpiration. Most of this leaves the plant through the pores — called stomata — in the leaf. A pair of guard cells flanks each stoma. When the guard cells are turgid, the stoma is open. When turgor is lost, the stoma closes. ABA is the hormone that triggers closing of the stomata when soil water is insufficient to keep up with transpiration.