BIO3: RESPONSE IN ANIMALS AND BEHAVIOUR

This unit brings you animal behaviors and how they respond to stimuli.

BEHAVIOR AND RESPONSE IN ANIMALS.

Behavior is what animals do.  It can be defined more precisely as an internally directed system of adaptive activities that facilitate survival and reproduction.

Ethology is the scientific study of animal behavior — particularly when that behavior occurs in the context of an animal’s natural environment.  Ethologists strive to observe, record, and analyze each species’ behavioral repertoire in order to understand the roles of development, ecology, physiology, and evolution in shaping that behavior.

Insects have always been popular as subjects for behavioral research because, in comparison to vertebrates, they have relatively simple nervous systems, they exhibit discrete responses to external stimuli, and they are more conducive to ethical experimentation.  Although they may lack the capacity for intelligence or forethought, they still display a fascinating array of adaptive behavior that is a source of wonder and amazement to anyone who takes the time to study it. 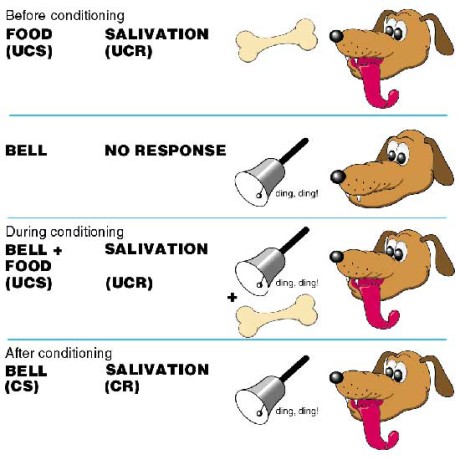 Any behavior we can observe by watching an animal is overt behavior.  In insects, this usually includes responses to external stimuli as well as spontaneous activities that are related to the animal’s internal (physiological) needs.

Ethologists use the term “drive” (“hunger drive”, “sex drive”, etc.) to describe motivational urges that compel animals to behave as they do.  Insects also appear to have internal “drives” for dispersal or migration as well as “drives” to complete stages in development such as constructing a nest or spinning a cocoon. In general, overt behavior may be classified as innate, learned, or complex.  Many people use the term “instinctive behavior” as a synonym for innate behavior.

Although both terms refer to natural, inborn patterns of behavior, some ethologists avoid the word “instinct” because in common English usage it often includes the connotation of acquired aptitudes or talents, as in:  “She has good business instincts.”  Purists avoid any confusion in meaning by using the adjective “innate” for behaviors that are acquired through inheritance, and “learned” for behaviors that are acquired through experience.

Complex behavior is a blend of innate and learned components.

ethogram) just as they inherit physical traits such as body color and wing venation.  In general, innate behaviors will always be:

Heritable — encoded in DNA and passed from generation to generation

Intrinsic — present in animals raised in isolation from others

Stereotypic — performed in the same way each time by each individual

Inflexible — not modified by development or experience

Since innate behavior is encoded in DNA, it is subject to genetic change through mutation, recombination, and natural selection.  Just like physical traits, innate behaviors are phylogenetic adaptations that have an evolutionary history.

Comparative study of similar species often sheds light on the selective pressures that drive evolutionary changes in behavior.  It may also help explain the origin of some very unusual behavior.  One species of dance fly, for example, has a courtship ritual in which a male gives a ball of silk to a female.  She unravels the ball while he mates with her.

By itself, this curious behavior seems truely bizarre.  But a study of courtship in other dance flies reveals that males use a nuptial gift as a way to divert a female’s aggressive behavior long enough for insemination to occur.  In “primitive” species, the nuptial gift is an item of prey that the female consumes during copulation.  In more “advanced” species, males wrap the prey in silk, thus buying a little extra time for copulation.  In the species where males offer just a ball of silk, they are exploiting the female’s innate response to the stimulus of a nuptial gift.  Just another example of “selfish genes” at work!

Just because an insect’s behavior is innate does not necessarily mean it is simple.  Over time, natural selection can lead to surprisingly intricate and sophisticated behavior such as the dance language of honey bees or the courtship rituals of dance flies.  These behaviors may appear purposeful and intelligent, but they are merely the product of millions of years of genetic refinement through natural selection.

In general, innate behaviors are viewed as “programmed” responses to external stimuli.  They usually fit into one of the following categories:

The most basic unit of innate behavior is a simple reflex arc.  This is a neural pathway that may involve as few as two neurons:  a sensory neuron detects a stimulus and is linked with a motor neuron that sets off a response in an effector cell (such as a muscle or a gland cell).  More commonly, reflex arcs also include an association neuron spliced between the sensory and motor neurons.

Orientation Behaviors are coordinated movements (walking, flying, swimming, etc.) that occur in response to an external stimulus.  These behaviors have adaptive value for survival by helping the insect locate (or avoid) the source of a stimulus.  Orientation behaviors can be viewed as elements in a neural hierarchy.  The simplest behaviors involve input from only a single sensory receptor whereas more advanced behaviors require bilateral input from a pair of receptors.

Kinesis is a change in the speed of movement (orthokinesis) or a change in the rate of turning (klinokinesis) which is directly proportional to the intensity of a stimulus.  Input from only a single sensory receptor is necessary.  A kinesis is non-directed orientation, that is, the animal exhibits a “random walk”.  The change in speed or rate of turning increases the probability of locating the stimulus but does not guarantee it.

Taxis is a movement directly toward (positive) or away from (negative) a stimulus.  A klinotaxis involves side-to-side motions of the head or body with successive comparison of stimulus intensity as the animal moves forward.  A tropotaxis requires bilateral input from paired sensory receptors such that the signal is equalized in both receptors.  Stimulus intensity increases with movement toward the source and decreases with movement away from the source.  A prefix may also be used to designate the type of stimulus involved (i.e. phototaxis=light; geotaxis=gravity; thigmotaxis=contact with other objects).

The dorsal light reaction is a special case (telotaxis) in which movement occurs at a constant 90° angle to a light source.  By keeping the sun directly overhead, a flying or swimming insect can insure that it travels parallel to the ground (or water surface).  A diving beetle, for example, can be fooled into swimming upside down in an aquarium that is lit from below.  The dorsal light reaction also explains why moths tend to circle a street lamp at night.

The light compass reaction is another special case (menotaxis) in which insects (honey bees, for example) fly away from the nest site at a fixed angle (x°) to the sun and return at the supplementary angle (180-x°) — all without ever taking a class in geometry!

When a fixed action pattern fulfills or satisfies a physiological drive, it may be known as a consummatory act.  Taking a blood meal, for example, satisfies a mosquito’s hunger drive.  Any behavior that increases an individual’s probability of encountering the releaser for a consummatory act is often called an appetative behavior.  Thus, chirping by a cricket may be regarded as an appetative behavior because it increases the chances of finding a mate and satisfying the sex drive. 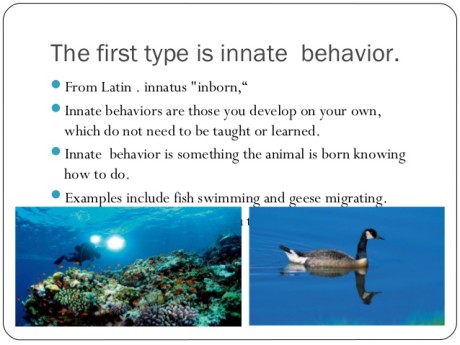 Learning can be defined as a persistent change in behavior that occurs as a result of experience.  Since a newborn nymph or larva has no prior experience, its first behaviors will be entirely innate.  Each individual starts life with a “clean slate”:  it acquires new skills and knowledge through trial and error, observation of other individuals, or memory of past events.  In general, learned behaviors will always be:

Although insects have relatively simple nervous systems and are not able to master college-level physics, they have demonstrated the ability to “learn” in each of the following ways:

Ethologists are often careful to distinguish between learned and innate behaviors, but in reality the two are at extreme opposite ends of a single continuum.  Most overt behavior is neither 100% innate nor 100% learned.  Sometimes innate behaviors may be modified (or modulated) through practice and experience.

In locusts, for example, the ability to fly is innate, but an older, experienced individual consumes less energy (per unit time) than a novice flier.  This suggests that the older insect has “learned” to fly more efficiently.  Similarly, learned behaviors may incorporate or depend upon elements of innate behavior.  Indeed, the ability to learn, to associate, or to remember is almost certainly an innate feature of the insect’s nervous system.  Schematically, it may be useful to think of a box  that represents the boundaries of an animal’s ethogram.  All behavior must occur inside the physiological limits of this box (e.g. a beetle larva does not have wings, therefore it cannot fly).  Within the box, a set of innate behaviors can be simplistically represented by straight lines.  By following a zigzag route, an insect can use only innate behavior to get from point “A” to point “B”.  But a learned behavior, superimposed on this innate grid, might provide a “shortcut”  that is more useful or more efficient.  As in the locust example above, the innate ability to fly may be refined and improved through experience.