This unit is about receptor organs in mammals.

The nervous system is responsible for sensing the external and internal environments of an organism, and for inducing muscle movement. Human sensation is achieved through the stimulation of specialized neurons, organized into five different modalities—touch, balance, taste, smell, hearing, and vision. The touch modality includes pressure, vibration, temperature, pain, and itch. Some animals are also able to sense magnetism and electric fields. Modality, timing, intensity, and location of the stimulus are the four features that allow the brain to identify a unique sensation.

The neurons specialized to detect sensation are also called receptors because they are designed to receive information from the environment. Each receptor responds only to a stimulus that falls within a defined region, called its receptive field. The size of the stimulus can affect the number of receptors that respond, and the strength of the stimulus can affect how much they respond. For example, when a cat sits on your lap, a large population of receptors responds to the cat’s weight, warmth, claws, and the vibrations from its purring.

Transduction refers to the transfer of environmental energy into a biological signal signifying that energy. Sensory receptors either transduce their respective stimuli directly, in the form of an action potential —the electrochemical communication between neurons—or they chemically communicate the transduction to a neuron . Neurons collect information at their dendrites , a long, branched process that grows out of the cell body. Information travels through the cell body, and then reaches the axon , another long process designed to transfer information by apposing, or synapsing on, another neuron’s dendrites. In some receptors, the axon is branched, and is specialized for both initializing and transmitting action potentials.

Touch receptors are a type of mechanoreceptor because they are activated by mechanical perturbation of the cell membrane. The axon is located in either shallow or deep skin, and may be encapsulated by specialized membranes that amplify pressure. When the appropriate type of pressure is applied to the skin, these membranes pinch the axon, causing it to fire. The action potential travels from the point of origin to the neuron’s cell body, which is located in the dorsal root ganglion. From there, it continues through another branch of the axon into the spinal cord, even as far as the brainstem.

A very similar system allows proprioceptors to convey information concerning the position of the limbs and body, and the degree of tension in muscles. The axon of the nerve cell is located either in the muscle, tendon, or joint, and firing is instigated by pinching, as with touch receptors. 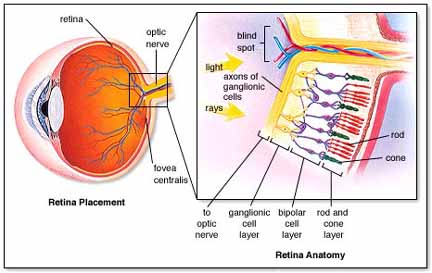 Campaniform organs are insect proprioceptors that play a role in feedback control of body position, as well as normal walking motor programs that allow the coordinated movement of all six legs.

Vision receptors are called photoreceptors because the stimuli that activate them are photons of light. The two types of photoreceptors are called rods and cones. Rods only sense the intensity of light, while cones can sense both intensity and color. While cones function best in bright light, rods function better in dim light. Furthermore, rods are located diffusely over the retina at the back of the eye, but cones are located in the central line of vision in a region of the retina called the fovea. For this reason, dim objects in the darkness can be viewed better from peripheral vision than from direct focus. There are three kinds of cones in the vertebrate eye—one responsive to wavelengths of light corresponding to the color blue, one responsive to red wavelengths, and one responsive to green wavelengths. These three colors form the entire range of colors that humans can perceive.

Visual information is carried along the optic nerve and passes through several relay points before reaching the primary visual area of the cerebral cortex, located at the back of the brain. From there it splits into two routes. The dorsal pathway processes depth and motion while the ventral pathway processes color and form.

Insects have compound eyes organized in hundreds or thousands of practically identical units called ommatidia, each of which has its own lens system and its own tiny retina. This gives the eye a faceted appearance. The insect’s retinula cell is a sensory neuron that contains photopigments similar to rods and cones. Overall, compound eyes resolve images about one sixtieth as well as vertebrate eyes. This is because the image is fractionated into so many ommatidia lenses and is difficult to reconstruct again in the brain. However, insects can have a greater range of vision than vertebrates, one that encompasses nearly the entire sphere of space around their bodies, due to the relatively large size of their eyes.

Hearing receptors, or hair cells, are mechanoreceptors located within a bony spiral structure called the cochlea. Sounds are interpreted by the brain from patterns of air pressure caused by the vibration of objects. Sounds can also travel through water or solid objects. In mammals, the pressure in the air is transformed into mechanical pressure by three ear bones called the malleus , incus , and stapes , located in the middle ear.

Pressure waves that strike the tympanum, a thin membrane separating the middle from the outer ear, force it to push inward. The malleus is attached to the incus and the incus to the stapes, so that the mechanical activity of the tympanum is transferred to a coiled structure of the inner ear called the cochlea. Because this is a fluid-filled structure, the pushing and pulling of the stapes generates waves in the fluid. A semi-flexible membrane called the basilar membrane is located within the fluid, and also conducts the waves of pressure. The wave-like motion of the basilar membrane causes a series of hearing receptors grounded in the basilar membrane to be pushed up against another membrane just above it, the tectorial membrane.

Hair-like extensions, stereocilia, at the apex of the hair cell push and bend against a tectorial membrane, when the basilar membrane reaches the peak of its wave phase. This instigates a change in the electrochemical properties of the cell. The basilar membrane is formed so that only a particular region of hair cells is pushed up to the peak of the wave form for any one frequency, or tone, of sound. The frequency that a particular hair cell responds to is its receptive field. Hair cells are closely coupled to the auditory nerve, and transmit their auditory information to neurons from this nerve, which then travels up through the brain.

Insect hearing receptors are typically located on the legs, and sometimes on the body, of the insect. In crickets, the ear is located on the tibia of the foreleg. The eardrum of crickets is called a tympanum, and consists of an oval membrane on one side of the leg, and a smaller round tympanum on the other surface. Inside the tympanum is a large air sac formed by the leg trachea, which is the insect respiratory organ. Transduction mechanisms in the cricket ear are not well understood, but the vibration of the tympanum is known to stimulate the activity of auditory neurons behind the membrane. 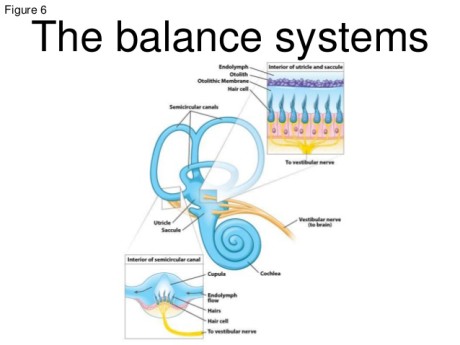 Vertebrate balance receptors are located in a specialized organ in the inner ear called the vestibular organ. This structure is located directly adjacent to the cochlea, and is composed of a triplet of semicircular canals, each of which is oriented in a different plane—the X, Y, or Z axis. Movement of liquid in these tubes caused by rotation of the head or body are measured by vestibular hair cells. The stereocilia of these cells are embedded in a gelatinous material called the otolithic membrane.

Gravity and body movements cause the otolithic membrane to slide, which cause the stereocilia to bend in a particular direction. This leads to electrochemical changes in the hair cell, causes an action potential in the associated nerve ending. Information from the vestibular system allows eye and head movements to fix on a particular target, and to stabilize a moving image. It also allows organisms to balance—for example, when a cat walks atop a fence. 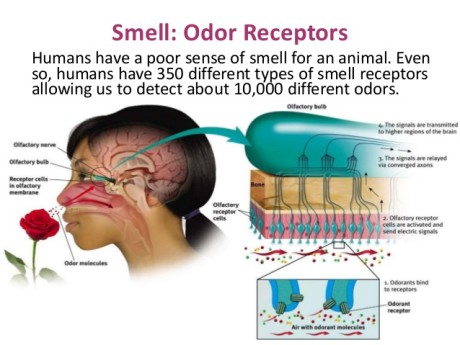 Smell receptors, or olfactory sensory neurons, are chemoreceptors , meaning that the binding of molecules causes these neurons to fire. Olfactory neurons extend a single dendrite to the surface of the skin in the nose, where it expands—along with dendrites from other neurons—to form a large knob. Thin hair-like projections extend from this knob into the thin layer of mucus within the nose. These projections contain a diverse array of receptors for odorants, so that all olfactory neurons are able to respond to a particular scent. The number that actually do respond is relative to the concentration of the scent molecules in the air.

Taste-detecting, or gustatory, organs are also chemoreceptors and are located in functional groupings called taste buds on the tongue, palate, pharynx, epiglottis, and the upper third of the esophagus. Taste cells have a very short life span, which is why each unit contains a population of stem cells that continuously divides, producing progeny cells to replace the dying taste cells. The remainder of the cell types in the taste bud has hair-like projections called microvilli that extend into a pore at the top of the taste bud. When taste molecules bind or interact with the microvilli, the taste cell undergoes an electrochemical change that is conveyed to an associated neuron; however, taste cells are not neurons. Four basic taste sensations can be distinguished by humans: bitter, salty, sour, and sweet.