Endocrine glands lack ducts and are hence, called ductless glands. Their secretions are called hormones.
The classical definition of hormone as a chemical produced by endocrine glands and released into the blood and transported to a distantly located target organ has current scientific definition as follows: Hormones are non-nutrient chemicals which act as intercellular messengers and are produced in trace amounts.

The new definition covers a number of new molecules in addition to the hormones secreted by the organised endocrine glands. Invertebrates possess very simple endocrine systems with few hormones whereas a large number of chemicals act as hormones and provide coordination in the vertebrates.

Hormones are released in the body as chemicals in the form of proteins, amino acids, amines and steroids, among other compounds. These are used in the coordination of metabolic activities, either independently or antagonistically. For example, the thyroxine hormone produced by the thyroid gland regulates the metabolic rate.

This is important in energy release in that it influences oxygen consumption and utilisation in the body. When there is excessive activity of the thyroid glands, cells utilise higher oxygen amounts, above the normal consumption, and in the case of low thyroid hormone levels, oxygen use in cells is reduced.  Both conditions affect optimum energy release by the body, requiring homeostatic feedback to get normal concentration levels of the thyroid hormone. Other hormones affecting energy production are growth hormones and insulin. These influence glucose utilisation in the body, which is controlled to stabilise blood glucose levels.

The antideuretic hormone (ADH) is useful in kidney reabsorbtion processes and the sex hormones are important for sexual development. These are some of the hormones that determine chemical communication in the body.  The major economic role is to ensure a healthy body, proper growth indicators, and to avoid starvation of organisms either as a result of malfunctioning of the homeostasis mechanisms and associated organs or food shortage in the community.

The endocrine glands and hormone producing diffused tissues/cells located in different parts of our body constitute the endocrine system. Pituitary, pineal, thyroid, adrenal, pancreas, parathyroid, thymus and gonads (testis in males and ovary in females) are the organized endocrine bodies in our body (Figure 1). In addition to these, some other organs, e.g., gastrointestinal tract, liver, kidney, heart also produce hormones. A brief account of the structure and functions of all major endocrine glands and hypothalamus of the human body is given in the following sections. 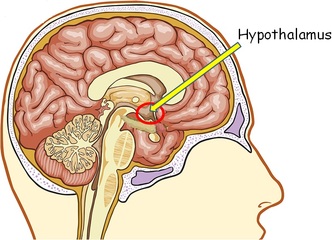 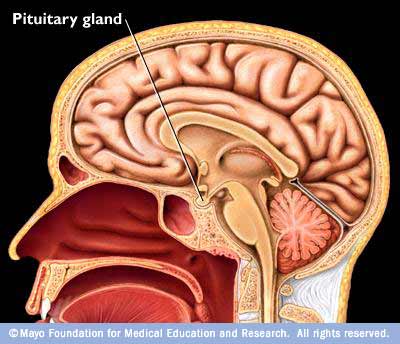 The pituitary gland is located in a bony cavity called sella tursica and is attached to hypothalamus by a stalk (Figure 2). It is divided anatomically into an adenohypophysis and a neurohypophysis. Adenohypophysis consists of two portions, pars distalis and pars intermedia.

The pars distalis region of pituitary, commonly called anterior pituitary, produces growth hormone (GH), prolactin (PRL), thyroid stimulating hormone (TSH), adrenocorticotrophic hormone (ACTH), luteinizing hormone (LH) and follicle stimulating hormone (FSH). Pars intermedia secretes only one hormone called melanocyte stimulating hormone (MSH). However, in humans, the pars intermedia is almost merged with pars distalis. Neurohypophysis (pars nervosa) also known as posterior pituitary, stores and releases two hormones called oxytocin and vasopressin, which are actually synthesised by the hypothalamus and are transported axonally to neurohypophysis.
Over-secretion of GH stimulates abnormal growth of the body leading to gigantism and low secretion of GH results in stunted growth resulting in pituitary dwarfism. Prolactin regulates the growth of the mammary glands and formation of milk in them. TSH stimulates the synthesis and secretion of thyroid hormones from the thyroid gland. ACTH stimulates the synthesis and secretion of steroid hormones called glucocorticoids from the adrenal cortex. LH and FSH stimulate gonadal activity and hence are called gonadotrophins. In males, LH stimulates the synthesis and secretion of hormones called androgens from testis. In males, FSH and androgens regulate spermatogenesis. In females, LH induces ovulation of fully mature follicles (graafian follicles) and maintains the corpus luteum, formed from the remnants of the graafian follicles after ovulation. FSH stimulates growth and development of the ovarian follicles in females. MSH acts on the melanocytes (melanin containing cells) and regulates pigmentation of the skin. Oxytocin acts on the smooth muscles of our body and stimulates their contraction. In females, it stimulates a vigorous contraction of uterus at the time of child birth, and milk ejection from the mammary gland. Vasopressin acts mainly at the kidney and stimulates resorption of water and electrolytes by the distal tubules and thereby reduces loss of water through urine (diuresis). Hence, it is also called as anti-diuretic hormone (ADH).

The pineal gland is located on the dorsal side of forebrain. Pineal secretes a hormone called melatonin. Melatonin plays a very important role in the regulation of a 24-hour (diurnal) rhythm of our body. For example, it helps in maintaining the normal rhythms of sleep-wake cycle, body temperature. In addition, melatonin also influences metabolism, pigmentation, the menstrual cycle as well as our defense capability.

The thyroid gland is composed of two lobes which are located on either side of the trachea (Figure 3). Both the lobes are interconnected with a thin flap of connective tissue called isthmus. The thyroid gland is composed of follicles and stromal tissues. Each thyroid follicle is composed of follicular cells, enclosing a cavity. These follicular cells synthesise two hormones, tetraiodothyronine or thyroxine (T4) and triiodothyronine (T3). Iodine is essential for the normal rate of hormone synthesis in the thyroid. Deficiency of iodine in our diet results in hypothyroidism and enlargement of the thyroid gland, commonly called goitre. Hypothyroidism during pregnancy causes defective development and maturation of the growing baby leading to stunted growth (cretinism), mental retardation, low intelligence quotient, abnormal skin, deaf-mutism, etc. In adult women, hypothyroidism may cause menstrual cycle to become irregular. Due to cancer of the thyroid gland or due to development of nodules of the thyroid glands, the rate of synthesis and secretion of the thyroid hormones is increased to abnormal high levels leading to a condition called hyperthyroidism which adversely affects the body physiology. 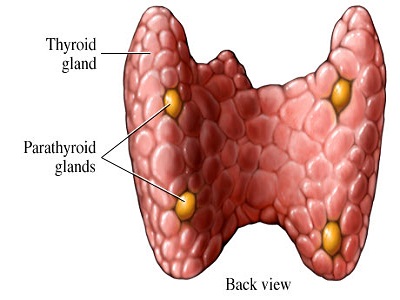 In humans, four parathyroid glands are present on the back side of the thyroid gland, one pair each in the two lobes of the thyroid gland (Figure 3b). The parathyroid glands secrete a peptide hormone called parathyroid hormone (PTH). The secretion of PTH is regulated by the circulating levels of calcium ions.
Parathyroid hormone (PTH) increases the Ca2+ levels in the blood. PTH acts on bones and stimulates the process of bone resorption (dissolution/demineralisation). PTH also stimulates reabsorption of Ca2+ by the renal tubules and increases Ca2+ absorption from the digested food. It is, thus, clear that PTH is a hypercalcemic hormone, i.e., it increases the blood Ca2+ levels. Along with TCT, it plays a significant role in calcium balance in the body.

The thymus gland is a lobular structure located on the dorsal side of the heart and the aorta. The thymus plays a major role in the development of the immune system. This gland secretes the peptide hormones called thymosins. Thymosins play a major role in the differentiation of Tlymphocytes, which provide cell-mediated immunity. In addition, thymosins also promote production of antibodies to provide humoral immunity. Thymus is degenerated in old individuals resulting in a decreased production of thymosins. As a result, the immune responses of old persons become weak.

Our body has one pair of adrenal glands, one at the anterior part of each kidney (Figure 4 a). The gland is composed of two types of tissues. The centrally located tissue is called the adrenal medulla, and outside this lies the adrenal cortex. 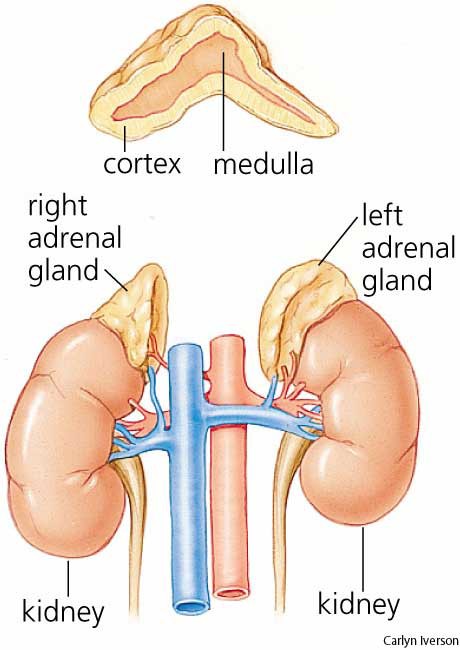 The adrenal medulla secretes two hormones called adrenaline or epinephrine and noradrenaline or norepinephrine. These are commonly called as catecholamines. Adrenaline and noradrenaline are rapidly secreted in response to stress of any kind and during emergency situations and are called emergency hormones or hormones of Fight or Flight. These hormones increase alertness, pupilary dilation, piloerection (raising of hairs), sweating etc. Both the hormones increase the heart beat, the strength of heart contraction and the rate of respiration. Catecholamines also stimulate the breakdown of glycogen resulting in an increased concentration of glucose in blood. In addition, they also stimulate the breakdown of lipids and proteins.
The adrenal cortex can be divided into three layers, called zona reticularis (inner layer), zona fasciculata (middle layer) and zona glomerulosa (outer layer). The adrenal cortex secretes many hormones, commonly called as corticoids. The corticoids, which are involved in carbohydrate metabolism are called glucocorticoids. In our body, cortisol is the main glucocorticoid. Corticoids, which regulate the balance of water and electrolytes in our body are called mineralocorticoids. Aldosterone is the main mineralocorticoid in our body.
Glucocorticoids stimulate, gluconeogenesis, lipolysis and proteolysis; and inhibit cellular uptake and utilisation of amino acids. Cortisol is also involved in maintaining the cardio-vascular system as well as the kidney functions. Glucocorticoids, particularly cortisol, produces antiinflamatory reactions and suppresses the immune response. Cortisol stimulates the RBC production. Aldosterone acts mainly at the renal tubules and stimulates the reabsorption of Na+ and water and excretion of K+ and phosphate ions. Thus, aldosterone helps in the maintenance of electrolytes, body fluid volume, osmotic pressure and blood pressure. Small amounts of androgenic steroids are also secreted by the adrenal cortex which play a role in the growth of axial hair, pubic hair and facial hair during puberty.

Pancreas is a composite gland (Figure 1) which acts as both exocrine and endocrine gland. The endocrine pancreas consists of ‘Islets of Langerhans’. There are about 1 to 2 million Islets of Langerhans in a normal human pancreas representing only 1 to 2 per cent of the pancreatic tissue. The two main types of cells in the Islet of Langerhans are called α-cells and β-cells. The α-cells secrete a hormone called glucagon, while the β-cells secrete insulin.
Glucagon is a peptide hormone, and plays an important role in maintaining the normal blood glucose levels. Glucagon acts mainly on the liver cells (hepatocytes) and stimulates glycogenolysis resulting in an increased blood sugar (hyperglycemia). In addition, this hormone stimulates the process of gluconeogenesis which also contributes to hyperglycemia. Glucagon reduces the cellular glucose uptake and utilisation. Thus, glucagon is a hyperglycemic hormone.
Insulin is a peptide hormone, which plays a major role in the regulation of glucose homeostasis. Insulin acts mainly on hepatocytes and adipocytes (cells of adipose tissue), and enhances cellular glucose uptake and utilisation. As a result, there is a rapid movement of glucose from blood to hepatocytes and adipocytes resulting in decreased blood glucose levels (hypoglycemia). Insulin also stimulates conversion of glucose to glycogen (glycogenesis) in the target cells. The glucose homeostasis in blood is thus maintained jointly by the two – insulin and glucagons.
Prolonged hyperglycemia leads to a complex disorder called diabetes mellitus which is associated with loss of glucose through urine and formation of harmful compounds known as ketone bodies. Diabetic patients are successfully treated with insulin therapy.

A pair of testis is present in the scrotal sac (outside abdomen) of male individuals (Figure 1). Testis performs dual functions as a primary sex organ as well as an endocrine gland. Testis is composed of seminiferous tubules and stromal or interstitial tissue. The Leydig cells or interstitial cells, which are present in the intertubular spaces produce a group of hormones called androgens mainly testosterone.
Androgens regulate the development, maturation and functions of the male accessory sex organs like epididymis, vas deferens, seminal vesicles, prostate gland, urethra etc. These hormones stimulate muscular growth, growth of facial and axillary hair, aggressiveness, low pitch of voice etc. Androgens play a major stimulatory role in the process of spermatogenesis (formation of spermatozoa). Androgens act on the central neural system and influence the male sexual behaviour (libido). These hormones produce anabolic (synthetic) effects on protein and carbohydrate metabolism.