This unit is about transport in animals in detail.

Transport in animals is the means through which materials move from area where they are produced to areas where they are needed in the system of the animals. This is very important study in animal systems. Without transport in animals, there will be nothing like digestion, absorption or excretion in animals. It is when materials are transported from the mouth or area of abundance in the animals to other areas that they are of good use that all these processes can take place. In animals, there are medium and mechanisms of transportation. The medium of transportation in mammals is not the same with that in some other animals. The medium of transportation in blue green algae is not the same in monkey.

Animals breathe in oxygen and breaths out CO2. Metabolic process of respiration going on in the body cells constantly releases carbon (IV) Oxide and water. These diffuse in exchange of oxygen across the capillary wall into the blood stream. The release of carbon (IV) Oxide from the body of animals helps to maintain the adequate internal body temperature of animals. Release of CO2 is successful because of the proper operation of animals’ lungs. Carbon IV Oxide is transported from the lungs to the external environment. It is absorbed by plants when animals breathe it out.

Remove Oxygen from animals and what will be left is nothing but a “dead thing”. Oxygen is the principal gas that holds the lives of animals. The red blood cells contain haemoglobin. This haemoglobin combines with oxygen to form what is called Oxyhaemoglobin. The oxyhaemoglobin assists in distributing oxygen to cells and tissues where they are needed in the body.

Hormone is produced by the endocrine glands of the animal body. It is transported by blood to the action sites. These action sites are where these hormones are needed and used. Human endocrine system is a group of ductless glands that regulate body processes by secreting chemical substances called hormones. They act on nearby tissues or are carried in the bloodstream to act on specific target organs and distant tissues. Diseases of the endocrine system can result from the over secretion or under secretion of hormones or from the inability of target organs or tissues to respond to hormones effectively.

Urea is mainly associated with the excretory products of birds. The urine is the excretory products of higher animals like mammals. Waste products arising from body metabolism of animals are carried by blood to the kidney, skin and so on for excretion. In the other words, urine is transported from the kidney to the bladder and then excreted from the body through the possible part of the body.

The transport of amino acid in animals is carried out by various distinct transport systems. The affinities of the neutral amino acids clustered into two groups, indicating the presence of at least two distinct heavily overlapping mediated systems identified as the A and the L transport systems. System A (alanine-preferring) serves mainly for such amino acids as alanine, glycine, and serine while System L (leucine-preferring) shows a preference for the branched chain and aromatic amino acids. Straight chain amino acids such as methionine have a high affinity for both systems. The body does not have a store for amino acids. This means that dietary amino acids, in excess of those required for protein synthesis, are rapidly catabolised.

This is a universal solvent. All living things both plants and animals needs water for survival. Do you know the percentage of water in the human body? Arthur Guyton ‘s Textbook of Medical Physiology states that “the total amount of water in a man of average weight (70 kilograms) is approximately 40 litres, averaging 57 percent of his total body weight. Water is transported from one part of human body to the other. Water is also released as sweat through the skin pores. It is a very important class of food needed by animals.

Amonia has the molecular formula of NH3. It is formed during metabolism of amino acids in the system of animals which include both vertebrates and invertebrates. The ammonium or ammonia when transported can lead to predictable intracellular and extracellular pH changes. One important toxic effect of ammonia/ammonium is an increased demand for maintenance energy, caused by the need to maintain ion gradients over the cytoplasmic membrane. Amonia is transported across the cell membranes of animals.

Importance of Transportation in Animals

Transport in animals is of very good importance to the whole animal kingdom. I wonder how animals can live without transport in the body system. Thus, the importances of transportation in animals are shown below:

Transportation helps to take digested materials to where they are needed.

Transportation keeps the body warm during distribution of materials.

It helps in the excretion of toxic materials from the body.

Blood is a liquid tissue which is made up of cells suspended in freely in a watery medium called the plasma. The plasma appears as pale-yellow liquid and suspended cells under mild configuration. There are Red Blood Cells and White Blood Cells. Red Blood Cells (RBCs) are also known as the Erythrocytes. They are formed by special cells of bones, marrows of ribs, sternum (breast bone) and vertebrae. The red blood cells transport oxygen from the lungs to the cells of the body. The red blood cells are able to do this because they contain haemoglobin. The haemoglobin is an iron compound which combines with oxygen to form a bright red compound called Oxyhaemoglobin.

The White Blood Cells are also known as Leucocytes. The proportion of these cells is more when compared with the red blood cells. The cells feed like Amoeba and they take the shape of Amoeba as well. The overall function of the Leucocytes is to protect the body against infections. The white blood cells are “disease fighters”. They build stronger immune system in animals. 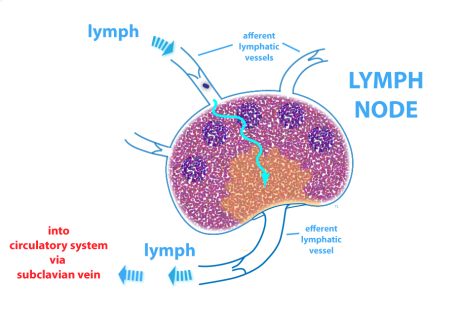 The lymph as a medium of transportation in animals transports proteins to different parts of the body where they are needed for the body system to perform and work effectively. Proteins are body building foods and this is needed by animals for growth and development. It is lymph that transports these proteins to the areas that demands for them. The lymphatic system has an important role in transporting body fluids and particulate materials to include proteins, fat particles, etc. Large proteins and certain cells (lymphocytes) pass from the blood plasma into the tissue fluid and it is the major role of the lymph to return these important components to the blood circulation.

Mechanisms of Transportation in Animals 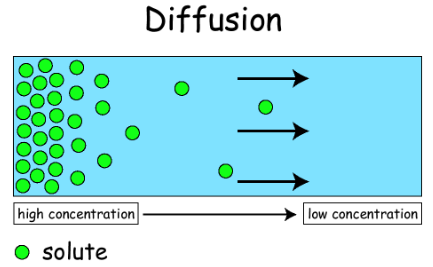 This is the movement of materials from a region of higher concentration to a region of lower concentration until equilibrium of two sides is maintained. It can also be defined as the movement of ions or molecules from the region of higher concentration to the region of lower concentration, without involving any permeable membrane. Materials are transported in the body system of animals from the area where they are abundant to areas where they are less abundant, and this process or mechanism of transportation in these animals is termed diffusion. Diffusion occurs in exchange of gases like oxygen (O2) or Carbon IV Oxide (CO2) during respiration in animals. Also, diffusion takes place during distribution of nutrients and digested foods in the blood stream of animals. In earthworms, the major blood vessels are the artery, capillaries and veins. The arteries connect the veins through the capillaries while they supply nutrients to the cells and take away waste from the cell. This medium of transportation in earthworm takes place through diffusion because the capillaries, arteries and veins are thin and small so that diffusion can easily occur through them. 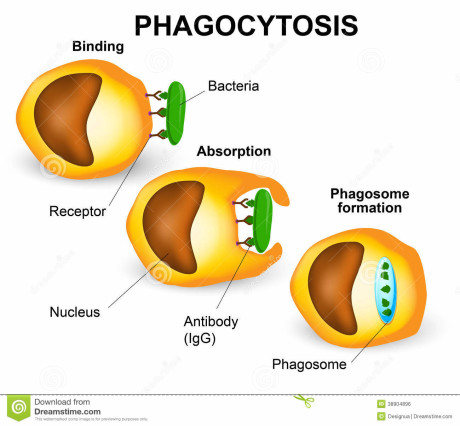 This is the movement of particulate matter from outside of the environment into the body of the organism across the cell membrane. This mechanism of transportation is found in Amoeba where the feeding material that is attached to the membrane is transported into the cells of the organism. Phagocytosis is also known as Cell eating. It is the process of engulfing and ingestion of particles by the cell or a phagocyte (e.g. macrophage and amoeba) to form a phagosome (or food vacuole). This process is used by the organisms to obtain nutrients which they need in order to succeed in their living. Phagocytosis is found in unicellular organisms such as Paramecia and by specialized phagocytes in multicellular organisms.

This is also known as Cell Drinking. It is the process through which liquid droplets are passed into the cells of lower organism like amoeba across its membrane. Pinocytosis is the means of taking in fluid together with its contents into the cell by forming narrow channels through its membrane that pinch off into vesicles, and fuse with lysosome that hydrolyze or break down contents. When amoeba gets close to the liquid fluid it wants to feed on, it engulfs them with its pseudopodia. This leads to the formation of a vesicle in the cytoplasm. With this vesicle (a pocket-like structure), the fluids are absorbed into the cells of the amoeba. Note that this is one of the endocytosis processes. Endocytosis is the external process through which unicellular organisms feed. Another form or type of endocytosis is the phagocytosis which was explained above.

This involves the movement of materials across a cell that can attach to a carrier molecule. Facilitated diffusion allows polar and charged molecules, such as carbohydrates, amino acids, nucleosides, and ions, to cross the plasma membrane through diffusion process. The two types of proteins that encourages facilitated transport in animals are the carrier proteins and channel proteins. The carrier proteins bind specific molecules to be transported on one side of the membrane. They then undergo conformational changes that allow the molecule to pass through the membrane and be released on the other side. Channel proteins form open pores through the membrane and they allow the free diffusion of any molecule of the appropriate size and charge. Also, specific channel proteins allow the passage of Na+, K+, Ca2+, and Cl– across the membrane of animals.

In this transportation mechanism, materials are transported into the cells of organisms or animals against a concentration gradient. Energy is needed to facilitate the movement of materials in this mechanism. In active transport, energy provided by coupled reaction (such as the hydrolysis of ATP) is used to drive the uphill transport of molecules in the energetically unfavourable direction. The ion pumps that are responsible for maintaining gradients of ions across the plasma membrane provide important examples of active transport driven directly by ATP hydrolysis. The concentration of Na+ is approximately ten times higher outside than inside of cells, whereas the concentration of K+ is higher inside than out. These ion gradients are maintained by the Na+-K+pump (also called the Na+-K+ATPase), which uses energy derived from ATP hydrolysis to transport Na+ and K+ against their electrochemical gradients.