This unit is about gaseous exchange in humans, plants and fish and the processes it takes.

Gas exchange is the process by which oxygen and carbon dioxide (the respiratory gases) move in opposite directions across an organism’s respiratory membranes, between the air or water of the external environment and the body fluids of the internal environment. Oxygen is needed by cells to extract energy from organic molecules, such as sugars, fatty acids, and amino acids. Carbon dioxide is produced in the process and must be disposed.

The random movement of molecules is called diffusion.

AN ILLUSTRATION SHOWING DIFFUSION IN THE GASEOUS SYSTEM. 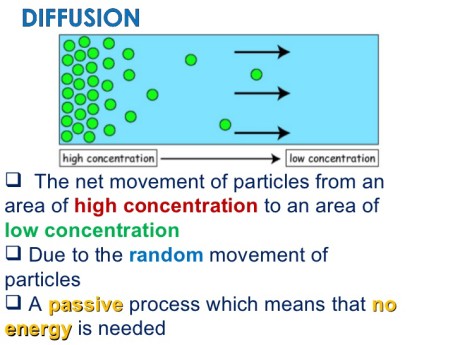 The solubility of the respiratory gases in water is low, and the solubility of oxygen is only about one-twentieth that of carbon dioxide. Special transport molecules within body fluids increase the oxygen content by holding oxygen molecules within circulating fluids. These molecules are called respiratory pigments and include hemoglobin , which is red, and hemocyanin, which is blue. These molecules combine with oxygen at the respiratory membrane, where oxygen concentrations are relatively high and easily release the oxygen in deeper tissues, which are low in oxygen.

Diffusion follows Fick’s Law. It is a passive process (doesn’t require energy) affected by factors such as:

Gases must first dissolve in a fluid in order to diffuse across a membrane therefore all gas exchange systems require a moist environment.

In single-celled organisms diffusion can occur straight across the cell membrane; as organisms increase in size so does the distance gases must travel across. Their surface-area-to-volume ratio also decreases. Diffusion alone is not efficient enough and specialised respiratory systems are required. This is the case with humans and fish where circulatory systems have evolved: These are able to transport the gases to and from the respiratory surface and maintain a continuous concentration gradient.

Both oxygen and carbon dioxide are transported around the body in the blood – through arteries, veins and capillaries. They bind to haemoglobin in red blood cells although this is more effective with oxygen. Carbon dioxide also dissolves in the plasma or combines with water to form bicarbonate ions (HCO−
3). This reaction is catalysed by the carbonic anhydrase enzyme in red blood cells:
The main respiratory surface in humans are the alveoli.  Alveoli are small air sacs branching off from the bronchioles in the lungs. They are one-cell thick and provide a moist and extremely large surface area for gas exchange to occur. Capillaries carrying deoxygenated blood from the pulmonary artery run across the alveoli – they are also extremely thin so the total distance gases must diffuse across is only around 2-cells thick. 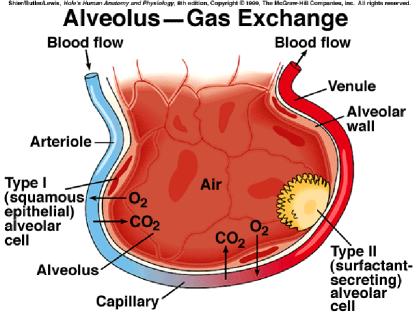 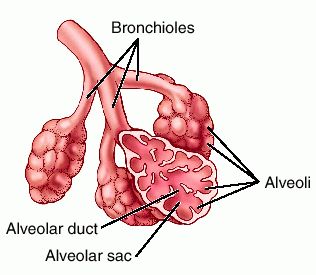 An average adult has about 600 million alveoli, giving a total surface area of about 100m²,so the area is huge. The walls of the alveoli are composed of a single layer of flattened epithelial cells, as are the walls of the capillaries, so gases need to diffuse through just two thin cells. Water diffuses from the alveoli cells into the alveoli so that they are constantly moist. Oxygen dissolves in this water before diffusing through the cells into the blood, where it is taken up by haemoglobin in the red blood cells. The water also contains a soapy surfactant
which reduces its surface tension and stops the alveoli collapsing. The alveoli also contain phagocyte cells to kill any bacteria that have not been trapped be the mucus.

The steep concentration gradient across the respiratory surface is maintained in two ways: by blood flow on one side and by air flow on the other side. This means oxygen can always diffuse down its concentration gradient from the air to the blood, while at the same time carbondioxide can diffuse down its concentration gradient from the blood to the air. The flow of air in and out of the alveoli is called ventilation and has two stages: inspiration (or inhalation) and expiration (or exhalation). Lungs are not muscular and cannot
ventilate themselves, but instead the whole thorax moves and changes size, due to the action of two sets of muscles: the intercostal muscles
and the diaphragm.

WATCH VIDEO TO UNDERSTAND MORE ABOUT THE ALVEOLI 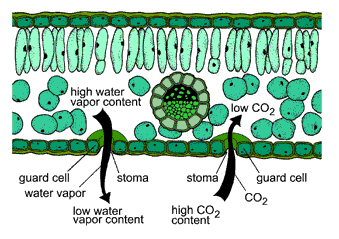 Air diffuses directly into and out of plants through pores on the underside of leaves known as stomata. The stomata are controlled by guard cells (affected by osmosis and turgor pressure). When the guard cells are turgid, stomata are open. When they are flaccid, stomata close and gas exchange cannot take place. The main respiratory surface is the spongy mesophyll cells inside the leaf. They have large air spaces and therefore provide a large surface area for gas exchange. Leaves are also very thin so the diffusion distance is small. 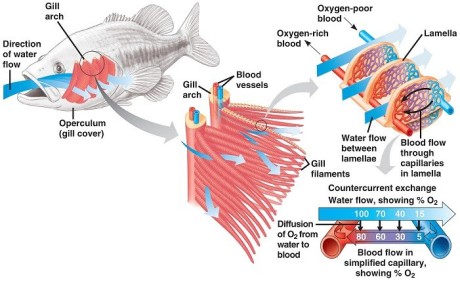 Fish must extract oxygen dissolved in water, not air, which has led to the evolution of gills and opercula. Gills are specialised organs containing filaments and lamellae – the lamellae contain capillaries and provide a large surface area and short diffusion distance as they are extremely thin.

Water is drawn in through the mouth and passes over the gills in one direction while blood flows through the lamellae in the opposite direction – this counter current maintains a steep concentration gradient. O2 is able to continually diffuse down its gradient into the blood and CO2 into the water.