This unit talks about excretion in animals and most especially in humans .

Diverse mechanisms have evolved that enable the various animal species to inhabit a wide range of environments. In animals whose bodies consist of a single layer of cells, waste disposal is accomplished principally by diffusion from the site of waste production to the outside environment. This method is efficient when the distances over which wastes diffuse are relatively short, when there is a high surface area to volume relationship, and when the rate of waste production is relatively low.

Different animals have different arrangements (or organs) for excretion, which depend on the constitution of the animal. For example:

1. In Amoeba (and other single celled animals), the waste material carbon dioxide is removed by diffusion through the cell membrane, but nitrogenous wastes (like ammonia) and excess water are removed by the contractile vacuole.

Removal of Waste Products in Humans :

All the time (even when we are asleep), our body produces waste substances. The major wastes produced f by the human body is: Carbon dioxide and Urea. Carbon dioxide is produced as a waste by the oxidation of food during the process of respiration. Urea is produced as a waste by the decomposition of unused proteins in the liver. Our body must get rid of these waste materials because their accumulation in the body is poisonous and harms us. Waste removal is called excretion.

Thus, our lings act as the excretory organs for removing product urea produced by the waste product carbon dioxide from decomposition of unused proteins the body. 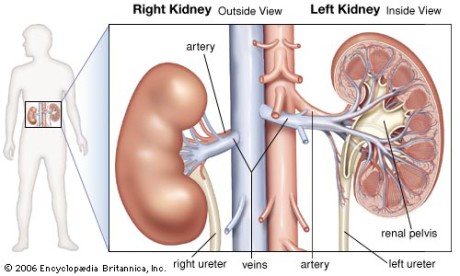 Every person has two kidneys. The blood in our body is constantly passing through our kidneys. The renal artery (or kidney artery) brings in the dirty blood (containing waste substances) into the kidneys. The function of kidneys is to remove the poisonous substance urea, other waste salts and excess water from the blood and excrete them in the form of yellowish liquid called urine.

Thus, kidneys clean our blood by filtering it to remove unwanted substances present in it. The cleaned blood is carried away from the kidneys by the renal vein (or kidney vein). The ureters (or excretory tubes), one from each kidney, opens into urinary bladder. 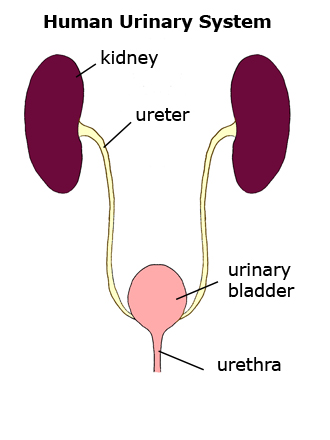 It shows a kidney which has been cut open to show the inner structure. Each kidney is made up of a large number of excretory units called nephrons (We have shown only one nephron to make things simple). The Nephron- nephron has a cup-shaped bag at its upper end which is called Bowman’s capsule. The lower end of Bowman’s capsule is tube-shaped and it is called a tubule. The Bowman’s capsule and the tubule taken together make a nephron.

The function of tubule off nephron is to allow the selective reabsorption of the useful substances like glucose, amino acids, salts and water into the blood capillaries (which surround it). But the waste material like urea remains behind in the tubule. It does not get reabsorbed into blood capillaries. We will now describe the working of the excretory system of humans.

In order to understand the working of the excretory system of humans, we will use a highly magnified diagram of a nephron. The dirty blood containing waste like urea (brought by renalartery) enters the glomerulus. The glomerulus filters this blood. During filtration, the substances like glucose, amino acids, salts, water and urea, etc., present in the blood pass into Bowman’s capsule and then enter the tubule of nephron. When the filtrate containing useful substances as well as the waste substances passes through the tubule, then the useful substances like all glucose, all amino acids, most salts, and most water, etc., are reabsorbed into the blood through blood capillaries surrounding the tubule. Only the waste substances urea, some unwanted salts and excess water remain behind in the tubule. The liquid left behind in the tubule of the nephron is urine. 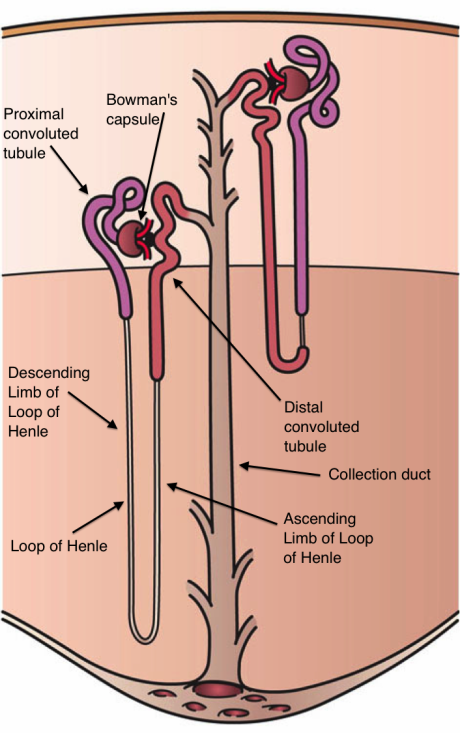 The nephron carries this urine into the collecting duct of the kidney from where it is carried to ureter. From the ureter, urine passes into urinary bladder. Urine is stored in the bladder for some time and ultimately passed out of the body through urethra. Please note that the human urine contains water, some salts and nitrogenous substances, most of which is urea (and some uric acid).