This unit is about Aerobic respiration and it brings out all the processes in the respiratory system.

Aerobic respiration is the release of energy from glucose or another organic substrate in the presence of Oxygen. Strictly speaking aerobic means in air, but it is the Oxygen in the air which is necessary for aerobic respiration.

The chemical equation is:

In the above equations we see that glucose is broken down by oxygen to release energy with carbon dioxide and water being produced as by-products of the reaction. Approximately 2900 kJ of energy is released when one mole of glucose is broken down.  The released energy is used to make a special energy molecule called Adenosine triphosphate (ATP).  ATP is where the energy is stored for use later on by the body.

Here is a molecular model of a glucose molecule. You do not need to memorise the diagram for you GCSE exam, but it should help you to understand that a molecule of glucose contains six atoms of Carbon (shown in blue), twelve atoms of Hydrogen (shown in green), and six atoms of Oxygen (shown in red).

In our tissues glucose can be broken down to release energy. The energy is used to make a substance called Adenosine Tri-Phosphate or ATP as it is usually called. ATP can provide energy for other processes such as muscle contractions.

Here is a balanced chemical equation for the process of aerobic respiration. You only need to memorise this for the Higher Tier GCSE paper, however I am sure that you really want a grade “A” so why not memorise it.

You should be able to see six carbon atoms on each side of the equation; One molecule of glucose contains six atoms of Carbon and six molecules of Carbon Dioxide each contain one atom of Carbon. 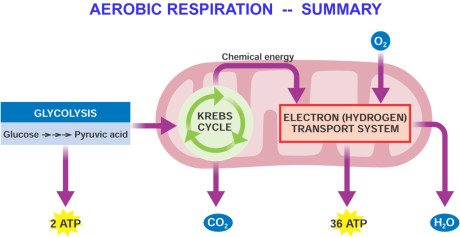 Aerobic respiration takes place in almost all living things. It is easy to get rid of the Carbon Dioxide and excess water; this is excretion (the removal of the toxic waste products of metabolism), and maximum energy is released from the glucose.

Some organisms can respire in the absence of air: this is anaerobic respiration. This does not release so much energy and it produces much more toxic waste products. However, if Oxygen is not available, anaerobic respiration is better than nothing. When this happens in our muscles we produce lactic acid which gives you cramp. The bacteria in milk produce the same chemical when they turn it sour. “Lactic” means “of milk”. So lactic acid is the acid in sour milk. Yeasts produce alcohol which is also toxic. Eventually there will be so much alcohol that the yeast cannot survive. 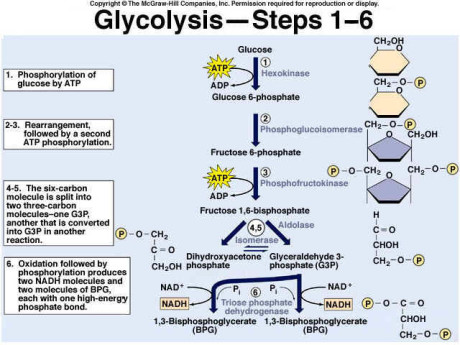 Glycolysis is a metabolic pathway that takes place in the cytosol of cells in all living organisms. This pathway can function with or without the presence of oxygen. In humans, aerobic conditions produce pyruvate and anaerobic conditions produce lactate. In aerobic conditions, the process converts one molecule of glucose into two molecules of pyruvate (pyruvic acid), generating energy in the form of two net molecules of ATP. Four molecules of ATP per glucose are actually produced, however, two are consumed as part of the preparatory phase. The initial phosphorylation of glucose is required to increase the reactivity (decrease its stability) in order for the molecule to be cleaved into two pyruvate molecules by the enzyme aldolase. During the pay-off phase of glycolysis, four phosphate groups are transferred to ADP by substrate-level phosphorylation to make four ATP, and two NADH are produced when the pyruvate are oxidized. The overall reaction can be expressed this way:

Pyruvate is oxidized to acetyl-CoA and CO2 by the pyruvate dehydrogenase complex (PDC). The PDC contains multiple copies of three enzymes and is located in the mitochondria of eukaryotic cells and in the cytosol of prokaryotes. In the conversion of pyruvate to acetyl-CoA, one molecule of NADH and one molecule of CO2 is formed. 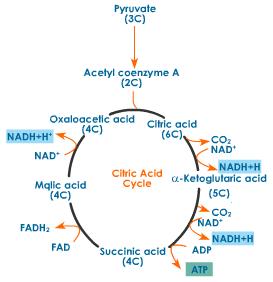 This is also called the Krebs cycle or the tricarboxylic acid cycle. When oxygen is present, acetyl-CoA is produced from the pyruvate molecules created from glycolysis. When oxygen is present, the mitochondria will undergo aerobic respiration which leads to the Krebs cycle. However, if oxygen is not present, fermentation of the pyruvate molecule will occur. In the presence of oxygen, when acetyl-CoA is produced, the molecule then enters the citric acid cycle (Krebs cycle) inside the mitochondrial matrix, and gets oxidized to CO2 while at the same time reducing NAD to NADH. NADH can be used by the electron transport chain to create further ATP as part of oxidative phosphorylation. To fully oxidize the equivalent of one glucose molecule, two acetyl-CoA must be metabolized by the Krebs cycle. Two waste products, H2O and CO2, are created during this cycle.

The citric acid cycle is an 8-step process involving different enzymes and co-enzymes. During the cycle, acetyl-CoA (2 carbons) + oxaloacetate (4 carbons) yields citrate (6 carbons), which is rearranged to a more reactive form called isocitrate (6 carbons). Isocitrate is modified to become α-ketoglutarate (5 carbons), succinyl-CoA, succinate, fumarate, malate, and, finally, oxaloacetate. The net gain of high-energy compounds from one cycle is 3 NADH, 1 FADH2, and 1 GTP; the GTP may subsequently be used to produce ATP. Thus, the total yield from 1 glucose molecule (2 pyruvate molecules) is 6 NADH, 2 FADH2, and 2 ATP. 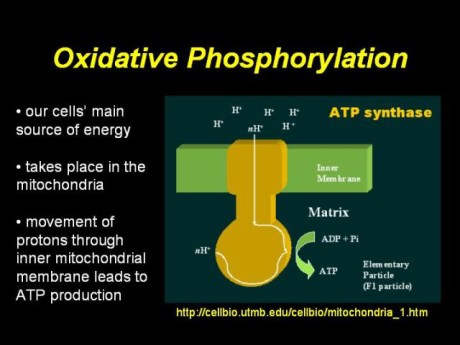 In eukaryotes, oxidative phosphorylation occurs in the mitochondrial cristae. It comprises the electron transport chain that establishes a proton gradient (chemiosmotic potential) across the inner membrane by oxidizing the NADH produced from the Krebs cycle. ATP is synthesised by the ATP synthase enzyme when the chemiosmotic gradient is used to drive the phosphorylation of ADP. The electrons are finally transferred to exogenous oxygen and, with the addition of two protons, water is formed.