This unit brings you the formation of cells and the difference between plant and animal cells.

A cell is the basic unit that makes up the body of a living thing. Similar cells are grouped to form a tissue. Groups of tissues form an organ and organs are arranged in series to form a functional unit known as a system. Then systems are organized to form an organism. Therefore, all organisms are developed from cells, which form the parts of their body that determine and control the physiological activities within living things. The bodies of organisms are either unicellular or multicellular.

All animals are multicellular. Human body contains trillions of cells.

All animal cells are eukaryotic, they are surrounded by cell membrane and do not have a cell wall. 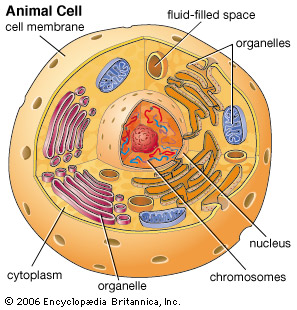 Most cells are not visible with the naked eye. However, with microscopes of various types, plant cells can be readily viewed and studied. In young parts of plant and fruits, cell shapes are generally round, while in older sections, the cells are somewhat boxlike with up to 14 sides as they become packed together.

A plant cell is bounded by a cell wall and the living portion of the cell is within the walls and is divided into two portions: the nucleus, or central control center; and the cytoplasm, a fluid in which membrane bound organelles are found. Between the primary cell walls of adjacent plant cells, lies a pectic middle lamella.

There can be a secondary cell wall which would be located just to the inside of the primary wall. Both walls consist mainly of cellulose, but the secondary cell wall may contain lignin and other substances. The outer boundary of the protoplasm (cytoplasm and nucleus) is a sandwich-like, flexible plasma membrane.

This membrane regulates what enters and leaves the plant cell. Plant cell organelles include: endoplasmic reticulum, with and without ribosomes attached; Golgi bodies, mitochondria, and plastids. Plastids are chloroplasts, chromoplasts or leucoplasts—depending on the color and likewise the function. Chloroplasts are of specific interest to those studying plants. A plant cell also, obviously, contains a nucleus which is bounded by a nuclear envelope with pores.

Plant cell are eukaryotic cells, they are membrane bound organelles. They are surrounded by a rigid cell wall.

Plant cells are similar to animal cells in being eukaryotic and they have similar cell organelles. 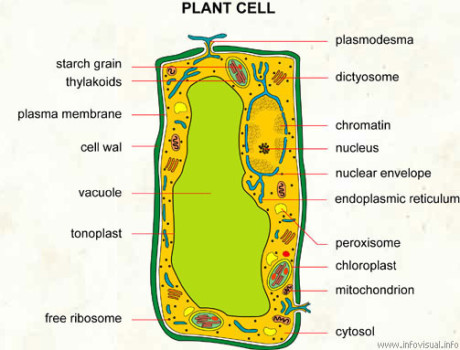 Generally, plant cells are larger than animal cells and are mostly similar in size and are rectangular or cube shaped.

PARTS OF ANIMAL AND PLANT CELLS 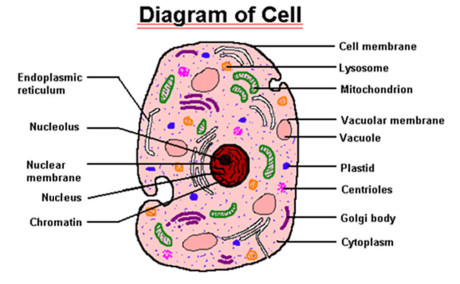 Cell membrane: It is the outer lining of the cell which encloses all other cell organelles. The cell membrane also known as the plasma membrane is semipermeable. It allows only specific molecules to pass through and blocking others.

Cell wall: The cell wall is a rigid layer that surrounds the plant cells. Plant cell walls are primarily made up of cellulose. It is located outside the cell membrane whose main function is to provide rigidity, strength, protection against mechanical stress and infection.

Cytoplasm: It is the fluid substance that fills the cell. All the cell organelles are suspended in the cytoplasm. The cytoplasm maintains the osmotic concentration of the cells and prevents them from bursting or shrinking.

Nucleus: It is a membrane bound organelle, spherical in shape. Most of the activities of the cell are directed by the nucleus.

All the cells in an animal have one complete set of genes in its nucleus. The genetic material DNA helps in protein formation.

Nucleolus: It is darkly stained are in the nucleus, it aids in protein formation and RNA synthesis.

Nuclear membrane: It is the porous double membrane layer surrounding the nucleus. It allows passage of substances and is a distinctive characteristic of the eukaryotic cell.

Nucleoplasm: It is the semi-fluid substance inside the nucleus, contains the genetic material and the nucleolus.

Mitochondria: Mitochondria is one of the largest organ of the cell and is known as the ‘power house of the cell’. It is a spherical or rod shaped organelles and is enveloped by a double membrane.  The mitochondria aid in conversion of glucose to high energy molecules (ATP) for the cell.

Ribosomes: Ribosomes are found on the endoplasmic reticulum. Together they help in manufacturing proteins for the cell following instructions of the nucleus.

Lysosomes: Lysosomes are membrane bound organelles, they contain digestive enzymes. They break down the waste products and detoxify the cell.

Centrosome: It is a small body located near the nucleus. Centrioles are made in the centrosomes. During cell division the centromere organizes the assembly of the micro-tubules.

Golgi apparatus: They are flattened stacks of membrane bound sacs. They function as the packaging unit; the proteins formed by the endoplasmic reticulum are packed into small membrane sacs called vesicles.

Vacuoles: They are organelles for storage. Small membrane bound vacuoles filled with fluids and water is present in animals. In plant cells the vacuoles perform functions of secretion, excretion and storage.

Chloroplasts: It is an elongated or disc-shaped organelle containing chlorophyll. It is the site for photosynthesis in a plant cell. The green pigment chlorophyll absorbs energy from sunlight.

Cytoskeleton: It is a network of fibers made up of micro-tubule and micro-filament. They maintain the shape and gives support to the cell.

Plasmodesmata: They are microscopic channels which traverse the cell walls of plant cells and enables transport and communication between them.

Plastids: Plastids are storage organelles. They store products like starch for synthesis of fatty acids and terpenes.

STRUCTURE OF PLANT AND ANIMAL CELLS

Plant cells are similar to animal cells in being eukaryotic and they have similar cell organelles.

Generally, plant cells are larger than animal cells and are mostly similar in size and are rectangular or cube shaped. Plant cell contains a few distinctive features like a cell wall, large vacuole and plastids.

Animal cells are typical eukaryotic cells. They are enclosed by plasma membrane and constitutes of membrane bound nucleus and organelles. Animal cells do not have cell wall. Due to the lack of the cell wall the size of the cell varies and the shape is irregular. Animal cells contain structures like centrioles, cilia and flagella and lysosomes.

Cell membrane: All cells are covered by cell membrane. It supports and protects the cell. It also controls the movement of materials in/out of cell.

It forms a barrier between cell and its environment. Also helps maintain homeostasis.

Cell Wall: Cell wall is seen only in plant cell. It is made of cellulose. The function of the cell wall is to support, protect and allow diffusion of gases in and out of the cell. The strength of the cell walls helps the tree to stand tall and grow against gravity.

Nucleus: It is a membrane bound organelle, spherical in shape. Most of the activities of the cell are directed by the nucleus. It also contains the hereditary material of the cell and also helps in protein synthesis. It is surrounded by a porous membrane the nuclear membrane which enables movement of materials in/out of the cell.

Nucleolus: It is darkly stained are in the nucleus, it aids in protein formation and RNA synthesis.

Endoplasmic reticulum: ER is a membrane bound organelle which makes lipids and other materials. It helps carrying materials through the cell and it aids in proteins synthesis.

Ribosomes: Ribosomes are the smallest cell organelles and are most abundant. They are found in all cells, as they synthesize proteins that are required for the survival of the cell.

Mitochondria: mitochondria are a double membrane bound organelle and has numerous folds. It is the site of aerobic cellular respiration and breaks down sugar molecule to release energy. Most of the ATP is made here.

Chloroplast: Chloroplasts are bound by two membranes. They are flattened structures and look like stack of coins. It is found in plant cells and is absent in animal cells. It is the site of photosynthesis in plants to prepare food (glucose) for the plant with the use of energy. Also helps in release of oxygen.

Golgi apparatus: The Golgi complex looks like the ER, and are located near the nucleus. Its function is to modify proteins made by the cell and pack and export proteins to the cell parts.

Lysosome: These are special vesicles in animal cells, they contain enzymes. It digests old cell parts and breaks down larger food molecules.

COMPARISON BETWEEN ANIMAL AND PLANT CELLS

Below you could see Comparison of Plant Cells and Animal Cells. 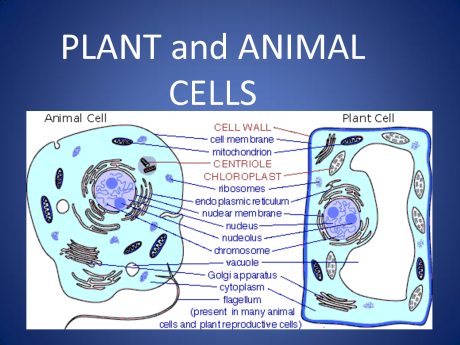 Follow this link for more information about the topic.