What are the different chemicals used in agriculture?

The different types of chemicals used in agriculture are:

The term “pesticides” means “to get rid of pests” and refers to all of these groups at once. 80 percent of pesticides in the U.S. are used on the following crops (in order of use): Corn, soybeans, potatoes, cotton, wheat, sorghum, oranges, peanuts, tomatoes, grapes, rice, apples, sugarcane, lettuce, pears, sweet corn, barley, peaches, grapefruit, pecans and lemons. 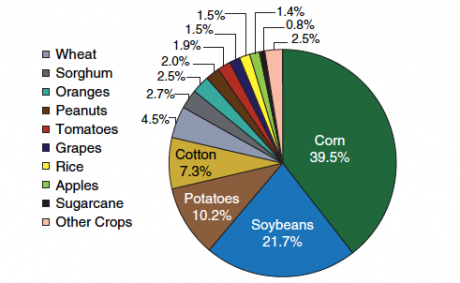 Pesticide use (see chart below) peaked in 1981 and has been on a slow decline ever since. Reasons for the initial rise include no-till agriculture, herbicide resistant crops, and crops like corn and soybeans being planted over more acres. Reasons for the decline include more effective pesticides, better application technology, genetic engineering (GMOs) and new production methods like cover crops. (This is further explained in Part 2) 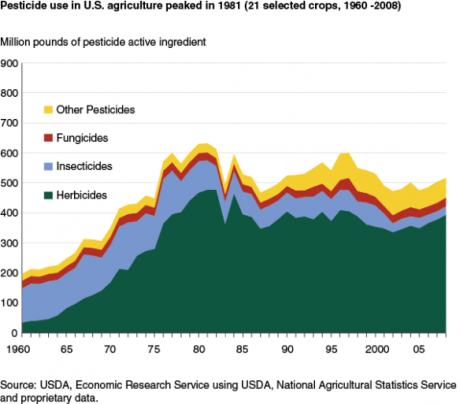 Why do farmers use pesticides? What are the issues related to using them?

Part 2 is answered in another one of my blogs that you can read here: Why do farmers use technology like GMOs and pesticides? (Benefits) What are the issues? (Costs)

Conclusion: Farmers (both conventional and organic) must use pesticides in order to produce enough food to feed the world. Pesticide use peaked in the 1980’s and will continue to decline as farmers and scientists develop new and more effective methods. 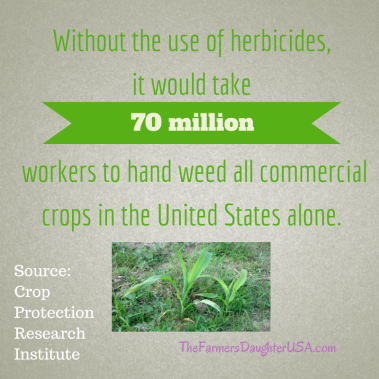 How do farmers apply chemicals?

In the following video, I will show you how we apply pesticides on our farm: 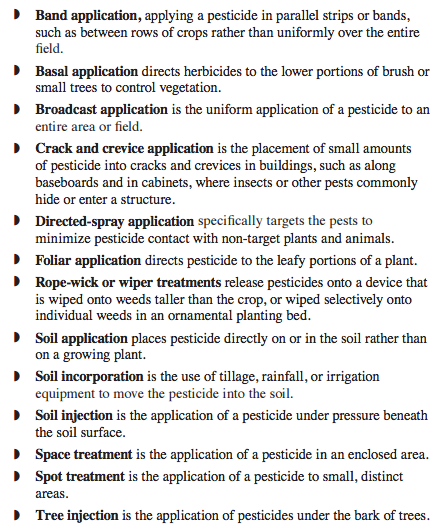 You can learn more about types of application here.

Are chemicals such as pesticides used in agriculture safe? For our food? For the environment?

There are several things to remember when it comes to the safety of chemicals in society:

We come into contact with chemicals all of the time. They are not inherently bad.

What do you think of when you hear the word “chemicals?” In today’s society the word “chemicals” has been turned into something we think of as harmful that we should stay away from. Some people are incredibly scared of chemicals and many try to claim they are living a “chemical free” lifestyle. The truth is, there is no way we can stay away from chemicals, they are everywhere! Chemicals make up the earth we live on, the air we breathe, the food we eat, and the things we build. Every day you interact with thousands of chemicals. Even food in its most basic form is full of chemicals, like this banana. 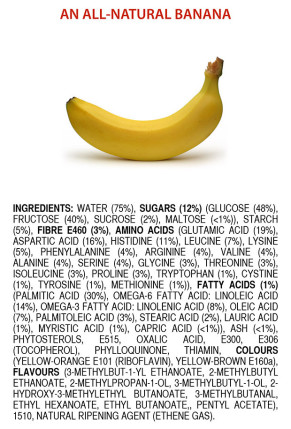 Chemicals are not inherently bad. Chemicals can be used to do a lot of good in a lot of different places. In agriculture we’ve used chemicals to help produce food more efficiently (as detailed in Part 1-2). But how do we know whether a chemical is good or bad for you? The answer is its toxicity.

Toxicity: The dose makes the poison.

Any substance can be dangerous depending on how much of it you are exposed to or consume. If you ate 100 bananas in one day you would probably get sick. If you drink 10 gallons of water, you will probably die. However, bananas and water are obviously not very dangerous. When it comes to the safety of any particular substance, the way scientists tell how dangerous it is comes from looking at its toxicity. If a substance is more toxic, it takes less exposure to it to be dangerous. If it is less toxic, it takes more exposure to it to be dangerous. The dose makes the poison.

So how toxic are the chemicals used in agriculture? Let’s look at the toxicity levels for different pesticides used in both conventional and organic farming, compared to household items. 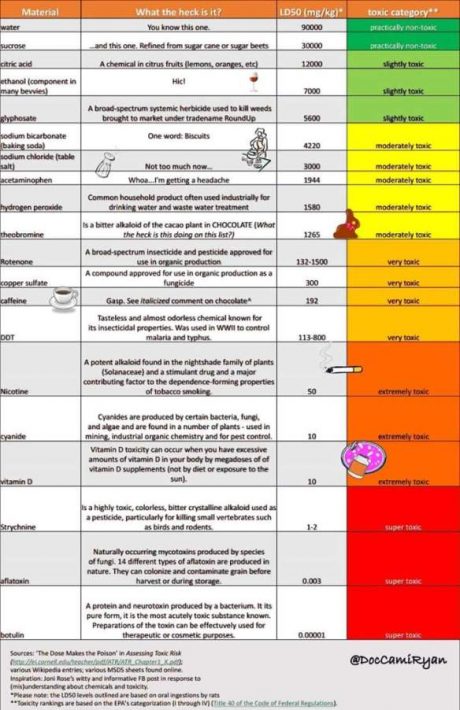 The most toxic pesticides are no longer used. Agriculture has transitioned to using safer chemicals. Most used today have very low toxicity.

When pesticides were first introduced, farmers were using chemicals that were very toxic. Those pesticides have long since been removed from application and today have been replaced by safer (less toxic) ones like glyphosate. Glyphosate (the most popular herbicide in agriculture) is the least toxic agro-chemical on the list. This is one of the reasons farmers have used it so much instead of other chemicals over the years. Another reason is because glyphosate resistant plants (GMOs) were developed so that farmers could control weeds post emergence with a safer chemical like glyphosate. Household items more toxic than glyphosate include baking soda, table salt, Tylenol, and caffeine.

“The science and our understanding of chemical risk evolves and EPA continues to reevaluate each pesticide’s safety every 15 years. EPA’s continuous reevaluation of registered pesticides, combined with strict FQPA standards, major improvements in science, and an increase in the use of safer, less toxic pesticides, has led to an overall trend of reduced risk from pesticides.” – E.P.A.

Pesticide use over the years:

Pesticides (like any substance) are not dangerous if consumed at a low enough rate. Just because a pesticide residue is detected in food, does not mean the food is unsafe.

As mentioned in part 3 of this blog, when farmers spray crops the spray is very diluted and only a very small amount of active ingredient is used per acre. Of that amount, most is activated by the plant/soil, does its job, and becomes non-active and unable to do any harm. There is always a possibility that a very small amount will not activate and will persist and could possibly make it into the food supply as a residue.

Therefore, it is true that very small amounts of pesticides may remain on fruits, vegetables, grains, and other foods. This is why you see a lot of information on the internet about “pesticide residues” in our food. However, these residues decrease considerably as crops are harvested, transported, exposed to light, washed, prepared and cooked. Because of this, the amount of pesticides found in the food and water you drink would be (and is) incredibly small. Based on the toxicity chart above, you would have to consume hundreds of pounds of food each day to reach a toxicity level of pesticides that would be dangerous to your health. The reason for this is because the chemicals would be so incredibly diluted by the time they reach the food supply. The EPA is responsible for managing our exposure to pesticide residues here in the United States. There are specific regulations that have been put in place to keep the level of synthetic pesticides found in food hundreds of times below what could harm you. (Source: EPA)

There are also many natural pesticides consumed by humans each day that are just as toxic or more so to humans, but are still below the rate that would be considered dangerous to our health:

“About 99.9 percent of the chemicals humans ingest are natural. The amounts of synthetic pesticide residues in plant food are insignificant compared to the amount of natural pesticides produced by plants themselves. Of all dietary pesticides that humans eat, 99.99 percent are natural: they are chemicals produced by plants to defend themselves against fungi, insects, and other animal predators. We have estimated that on average Americans ingest roughly 5,000 to 10,000 different natural pesticides and their breakdown products. Americans eat about 1,500 mg of natural pesticides per person per day, which is about 10,000 times more than the 0.09 mg they consume of synthetic pesticide residues.” – Dr. Bruce Ames (Source: California Berkeley)

If synthetic pesticides were truly causing all the things they have been claimed to cause (cancer, disease, etc.), farmers would be having severe health problems.

Farmers have been working with synthetic pesticides for the last 50-60 years. Farmers have a much greater risk of skin or lung exposure to pesticide, as it would be much more dangerous because it has not been diluted yet. This is why farmers wear protective gear when applying pesticides. There are no statistics showing farmers are having severe health problems from pesticides more than the general public. Our family even eats our GMO, pesticide-sprayed, corn straight from the field, after washing it of course (See video below) and we have not had any health issues.

Eating organic does not necessarily mean you will be exposing yourself to less pesticide residue.

As we’ve talked about in previous sections of this blog, organic farms can and will use natural pesticides to fight off pests in their fields. And as you can see in the toxicity chart, there are pesticides that organic farmers use that are much more toxic than pesticides conventional farmers use. Eating organic food will significantly lower your exposure to synthetic pesticides, but you can still be exposed to pesticide residues just as high or higher than regular food. But remember, as stated above, the EPA keeps both of these residues far below the level that could cause you harm.

Environmental concerns about pesticides are real and should be taken seriously.

There are many environmental concerns about pesticides and there are many people working on finding solutions to the problems associated with their use. As technology (better application, better chemicals) has developed, pesticide usage has and will decline, which will hopefully reduce some of these issues.

Keep in mind that much of human activity has a negative effect on the environment. Industries (exhaust from vehicles, planes, manufacturing plants, etc.), human/animal waste, construction, deforestation, mining, and a growing population in general are all harming the environment more than pesticides are. The best thing we can do is try to find solutions for all these problems and minimize our environmental impact as much as possible while still functioning as a society and minimizing human suffering (providing people with adequate food and shelter).

Eat healthy food, exercise often, and talk to the experts about your food.

As you can see, there are a lot of misconceptions about chemicals in agriculture and chemicals in general. It is best to talk to experts about these things and not just rely on what you see on the internet. Those experts include scientists, dietitians, toxicologists, and farmers.

There are a lot of things that contribute to the health epidemic in America and around the world. We eat too much sugar. We eat too many bad fats. We eat too much in general. We don’t exercise. We are too busy and operate under high stress levels. We eat out and don’t cook for ourselves. Chemicals are most likely not what is causing the main health problems. Even if they are, it is much more likely the chemicals we use around the house (cleaners, etc.), the chemicals in the air (pollution), medicines (side effects) and the chemicals we don’t think about (caffeine, tobacco, alcohol) that are causing the problems, not the extremely highly diluted pesticide residues you find in food.

In conclusion, food is never 100% safe. Neither is life. We must continue to use chemicals to have a functioning society and feed a growing population. It is important that we regulate these chemicals to prevent misuse and abuse. It is also important that we look for ways to use less chemicals and develop chemicals that are less toxic. However, as long as there are weeds, bugs, and diseases, there will be pesticides. And unless you grow your own food and hand pull the weeds and stomp on the bugs, you will have to deal with the reality of what we’ve talked about on this blog. I hope you’ve learned something from reading this, please leave a comment below and I will do my best to answer it!

USE THESE LINKS FOR MORE READING