Organisms in terrestrial ecosystems have adaptations that allow them to obtain water when the entire body is no longer bathed in that fluid, means of transporting the water from limited sites of acquisition to the rest of the body, and means of preventing the evaporation of water from body surfaces. They also have traits that provide body support in the atmosphere, a much less buoyant medium than water, and other traits that render them capable of withstanding the extremes of temperature, wind, and humidity that characterize terrestrial ecosystems. Finally, the organisms in terrestrial ecosystems have evolved many methods of transporting gametes in environments where fluid flow is much less effective as a transport medium.

There is one type of extensive terrestrial ecosystem due solely to human activities. The other eight types are natural ecosystems. Those natural ecosystems reflect the variation of precipitation and temperature over the Earth’s surface. The smallest land areas are occupied by tundra and temperate grassland ecosystems, and the largest land area is occupied by tropical forest. The most productive ecosystems are temperate and tropical forests, and the least productive are deserts and tundras.

Cultivated lands, which together with grasslands and savannas utilized for grazing are referred to as agroecosystems, are of intermediate extent and productivity. Because of both their areal extent and their high average productivity, tropical forests are the most productive of all terrestrial ecosystems, contributing 45% of total estimated net primary productivity on land.

THIS VIDEO EXPLAINS MORE ABOUT IT 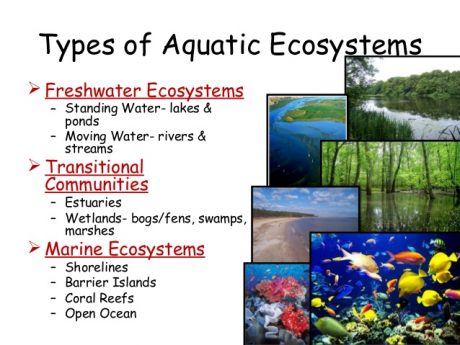 Marine ecosystems, the largest of all ecosystems, cover approximately 71% of the Earth’s surface and contain approximately 97% of the planet’s water. They generate 32% of the world’s net primary production. They are distinguished from freshwater ecosystems by the presence of dissolved compounds, especially salts, in the water. Approximately 85% of the dissolved materials in seawater are sodium and chlorine. Seawater has an average salinity of 35 parts per thousand of water. Actual salinity varies among different marine ecosystems. 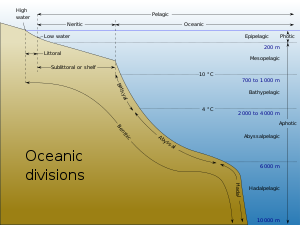 A classification of marine habitats.

Marine ecosystems can be divided into many zones depending upon water depth and shoreline features. The oceanic zone is the vast open part of the ocean where animals such as whales, sharks, and tuna live. The benthiczone consists of substrates below water where many invertebrates live. The intertidal zone is the area between high and low tides; in this figure it is termed the littoral zone. Other near-shore (neritic) zones can include estuaries, salt marshes, coral reefs, lagoons and mangrove swamps. In the deep water, hydrothermal vents may occur where chemosynthetic sulfurbacteria form the base of the food web.

There are three basic types of freshwater ecosystems: 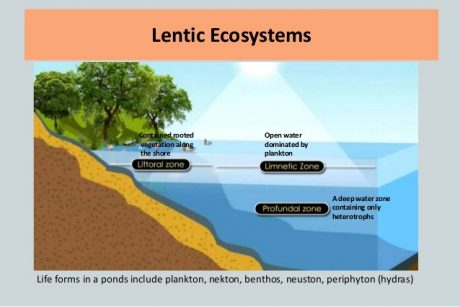 Lake ecosystems can be divided into zones. One common system divides lakes into three zones (see figure). The first, the littoral zone, is the shallow zone near the shore. This is where rooted wetland plants occur. The offshore is divided into two further zones, an open water zone and a deep water zone. In the open water zone (or photic zone) sunlight supports photosynthetic algae, and the species that feed upon them. In the deep water zone, sunlight is not available and the food web is based on detritus entering from the littoral and photic zones. Some systems use other names. The off shore areas may be called the pelagic zone, the photic zone may be called the limnetic zone and the aphotic zone may be called the profundal zone. Inland from the littoral zone one can also frequently identify a riparian zone which has plants still affected by the presence of the lake—this can include effects from windfalls, spring flooding, and winter ice damage. The production of the lake as a whole is the result of production from plants growing in the littoral zone, combined with production from plankton growing in the open water.

Wetlands can be part of the lentic system, as they form naturally along most lake shores, the width of the wetland and littoral zone being dependent upon the slope of the shoreline and the amount of natural change in water levels, within and among years. Often dead trees accumulate in this zone, either from windfalls on the shore or logs transported to the site during floods. This woody debris provides important habitat for fish and nesting birds, as well as protecting shorelines from erosion.

Two important subclasses of lakes are ponds, which typically are small lakes that intergrade with wetlands, and water reservoirs. Over long periods of time, lakes, or bays within them, may gradually become enriched by nutrients and slowly fill in with organic sediments, a process called succession. When humans use the watershed, the volumes of sediment entering the lake can accelerate this process. The addition of sediments and nutrients to a lake is known as eutrophication. 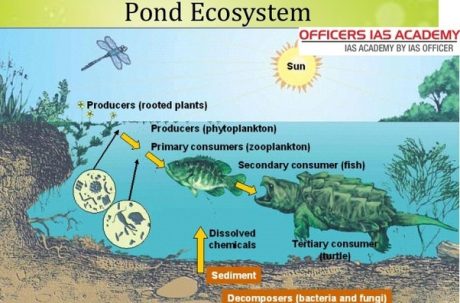 Ponds are small bodies of freshwater with shallow and still water, marsh, and aquatic plants. They can be further divided into four zones: vegetation zone, open water, bottom mud and surface film. The size and depth of ponds often varies greatly with the time of year; many ponds are produced by spring flooding from rivers. Food webs are based both on free-floating algae and upon aquatic plants. There is usually a diverse array of aquatic life, with a few examples including algae, snails, fish, beetles, water bugs, frogs, turtles, otters and muskrats. Top predators may include large fish, herons, or alligators. Since fish are a major predator upon amphibian larvae, ponds that dry up each year, thereby killing resident fish, provide important refugia for amphibian breeding. Ponds that dry up completely each year are often known as vernal pools. Some ponds are produced by animal activity, including alligator holes and beaver ponds, and these add important diversity to landscapes. 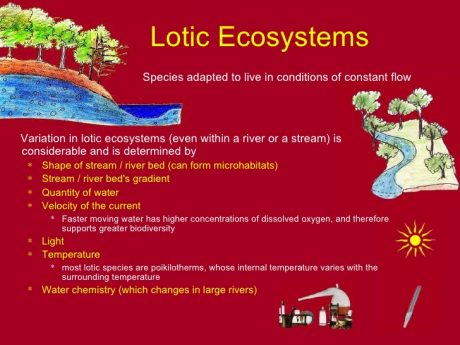 The major zones in river ecosystems are determined by the river bed’s gradient or by the velocity of the current. Faster moving turbulent water typically contains greater concentrations of dissolved oxygen, which supports greater biodiversity than the slow moving water of pools. These distinctions form the basis for the division of rivers into upland and lowland rivers. The food base of streams within riparian forests is mostly derived from the trees, but wider streams and those that lack a canopy derive the majority of their food base from algae. Anadromous fish are also an important source of nutrients. Environmental threats to rivers include loss of water, dams, chemical pollution and introduced species. A dam produces negative effects that continue down the watershed. The most important negative effects are the reduction of spring flooding, which damages wetlands, and the retention of sediment, which leads to loss of deltaic wetlands.

Wetlands are dominated by vascular plants that have adapted to saturated soil. There are four main types of wetlands: swamp, marsh, fen and bog (both fens and bogs are types of mire). Wetlands are the most productive natural ecosystems in the world because of the proximity of water and soil. Hence they support large numbers of plant and animal species. Due to their productivity, wetlands are often converted into dry land with dykes and drains and used for agricultural purposes. The construction of dykes, and dams, has negative consequences for individual wetlands and entire watersheds. Their closeness to lakes and rivers means that they are often developed for human settlement. Once settlements are constructed and protected by dykes, the settlements then become vulnerable to land subsidence and ever increasing risk of flooding. The Louisiana coast around New Orleans is a well-known example; the Danube Delta in Europe is another.

The health of an aquatic ecosystem is degraded when the ecosystem’s ability to absorb a stress has been exceeded. A stress on an aquatic ecosystem can be a result of physical, chemical or biological alterations of the environment. Physical alterations include changes in water temperature, water flow and light availability. Chemical alterations include changes in the loading rates of biostimulatory nutrients, oxygen consuming materials, and toxins. Biological alterations include over-harvesting of commercial species and the introduction of exotic species. Human populations can impose excessive stresses on aquatic ecosystems.There are many examples of excessive stresses with negative consequences. Consider three. The environmental history of the Great Lakes of North America illustrates this problem, particularly how multiple stresses, such as water pollution, over-harvesting and invasive species can combine. The Norfolk Broadlands in England illustrate similar decline with pollution and invasive species. Lake Pontchartrain along the Gulf of Mexico illustrates the negative effects of different stresses including levee construction, logging of swamps, invasive species and salt water intrusion.

Factors Affecting the Distribution of Animal and Plant Species