There are only about 25 elements in the living body out of the 92 elements present in nature. They are present at different locations in the body in different forms.

The most common 4 elements in the living body are Carbon, Hydrogen, Oxygen & Nitrogen. Other than above Sulphur, Phosphorous, Sodium, Potassium, Calcium, Magnesium, Iron and Chlorine are essential for the survival of organisms.

The below diagram 1.1 shows the percentages of main elements in the human body. 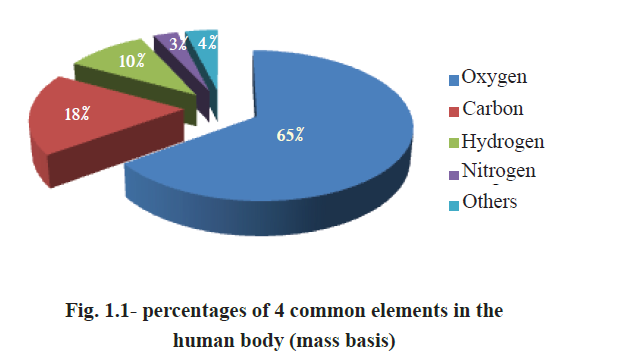 Water, minerals and gasses are some of the inorganic molecules that are essential for the maintenance of life. 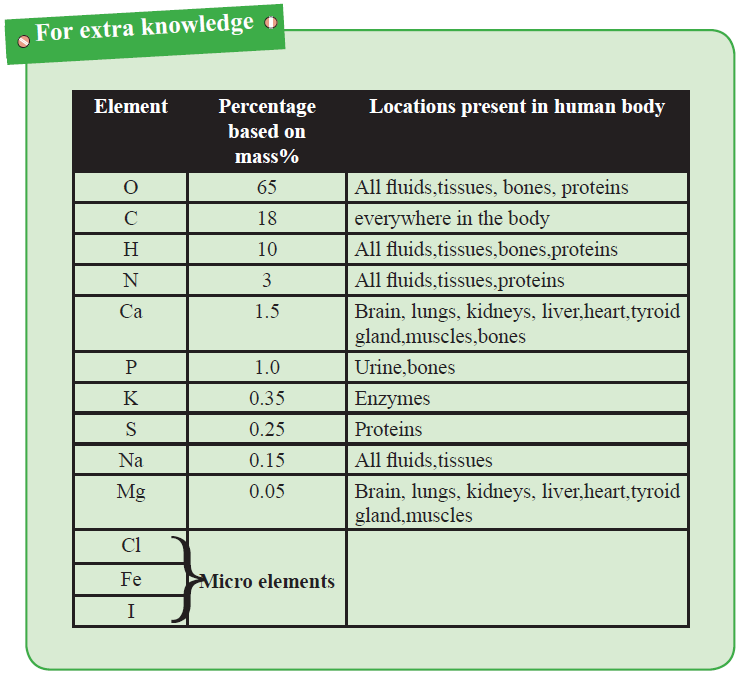 This is the most abundant organic compound on earth. They are produced during the photosynthesis of green plants.

The main elemental composition of carbohydrates is Carbon (C), Hydrogen (H) and Oxygen (O). Hydrogen and oxygen combine in 2:1 ratio in carbohydrates.

The carbohydrates can be classified into three groups as seen below according to the way they are formed. 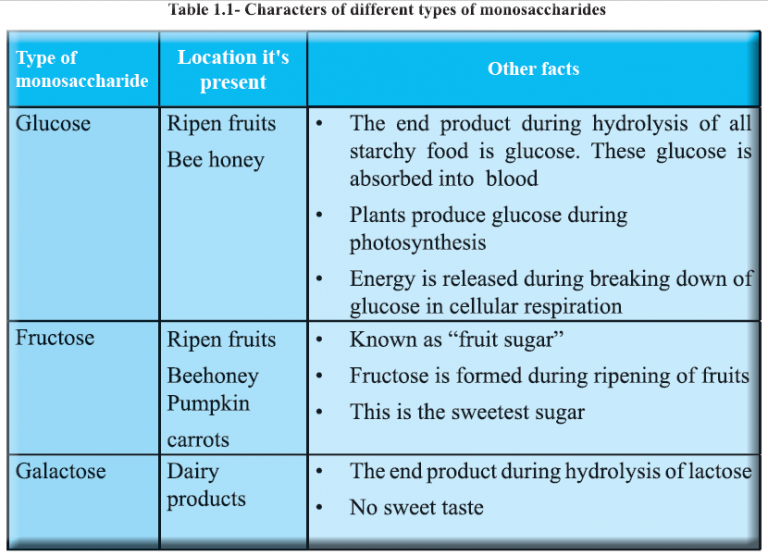 Maltose, Sucrose and Lactose are examples for disaccharides. The characters of disaccharides are discussed in the table below. 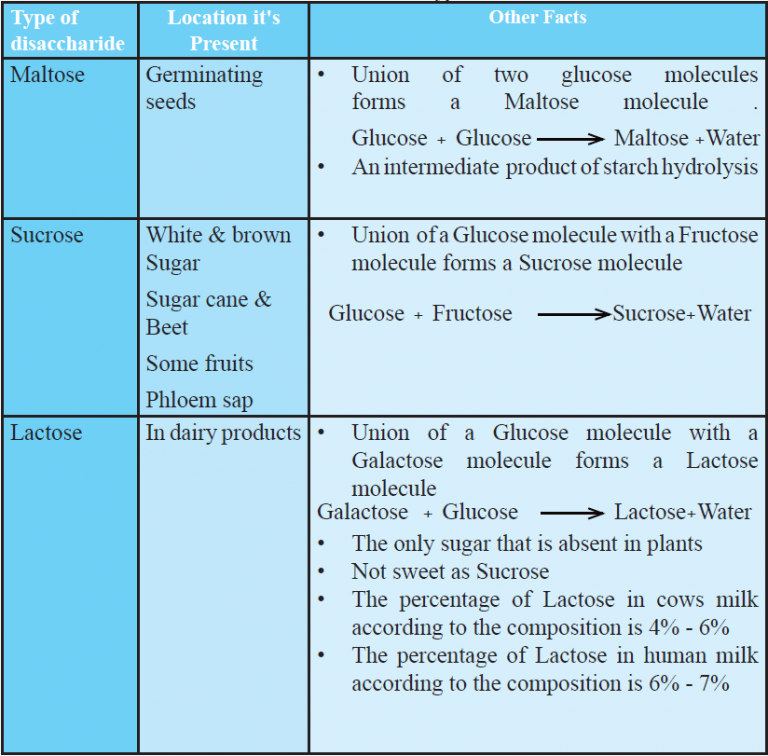 Polymerisation of a large number of monosaccharides form a polysaccharide molecule.

Hydrolysis of Polysaccharide results relevant monosaccharides. Insoluble in normal water. They are not crystals.

Cellulose, starch and glycogen are examples for polysaccharides. The structural unit of cellulose, starch and
glycogen is glucose, but their properties are different according to the number of glucose molecules and how they are bound with each other.

The characters of polysaccharides are discussed in the table below. 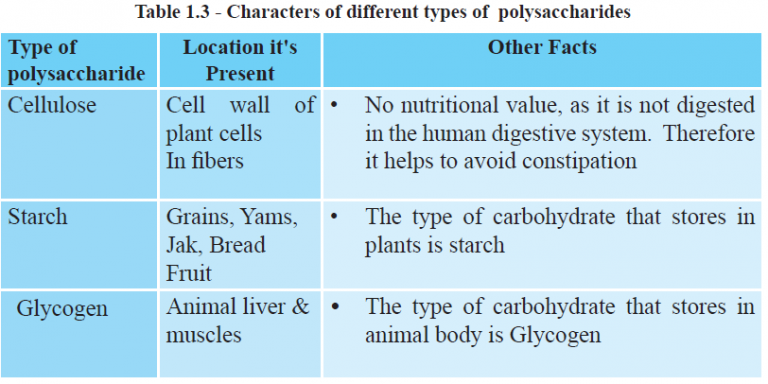 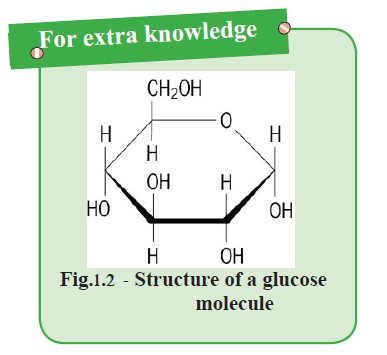 The below mentioned tests can be conducted to test Starch, Monosaccharides & Disaccharides which are some of the identified Carbohydrates.
Starch test

17% of the mature human body is composed of proteins. Protein is a complex molecule made up of polymerized amino acid molecules. Meat,fish,egg white cereals are some of the foods rich with proteins.

Below is the structure of a typical amino acid molecule. 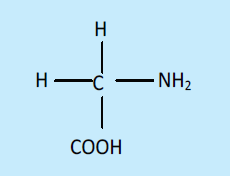 Some amino acids cannot be synthesized within the body. So they have to be taken from outside with food. Therefore they are known as essential amino acids. 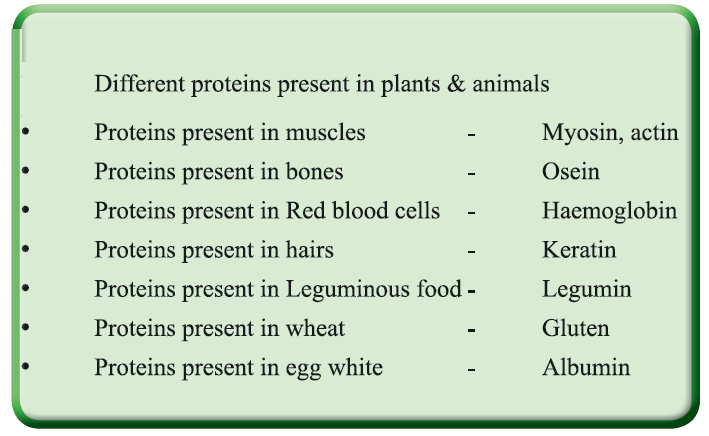 The special proteins (organic catalysts) that are produced within the organism to increase the rate of bio- chemical reactions are known as enzymes.

For example to convert sucrose into Glucose, sucrose has to be heated with a dilute acid. But the enzymes present in the digestive system do the same reaction at a low temperature. Therefore the activity of enzyme is to catalyze the bio- chemical reactions.

Activity of Amylase on starch

That is due to Moltose produced in starch hydrolysis with Amylase enzyme.

Starch gives black blue colour with iodine but it does not give colour change with iodine after 20 minutes as there is no starch there.That is because starch is changed into another compound by Amylase.

Fats & oils belong to this group. (Lipids which are solid at room temperature are called fats and liquids are called oils.)

Similar to carbohydrates, fats also contain Carbon, Hydrogen & Oxygen as constituent elements. But the ratio of hydrogen to oxygen in fats are very much higher than carbohydrates. Lipids are insoluble in polar solvents including water.

They are soluble in organic solvents.

Conclusion – Lipid present in that food

Fatty acids can be divided into two groups as follows.

Nucleic acid is the most important molecule out of the main biological molecules in living matter in genetical aspect. It is a linear polymer made up of large number of nucleotides. It contains Carbon (C), Hydrogen (H), Oxygen (O), Nitrogen (N) and Phosphorous (P). 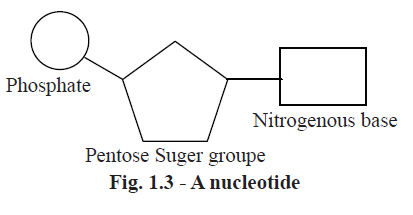 Each nucleotide is made up of 3 components. They are; 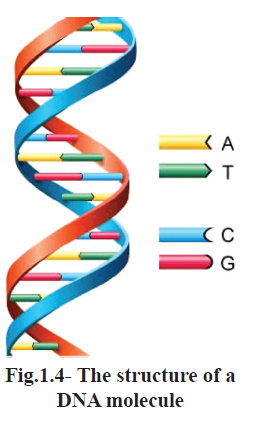 The structural unit of DNA is Deoxyribo Nucleotide. DNA transfers genetic characteristics from generation to generation

Except DNA, the other nucleic acid present in organisms is RNA. The structural unit of RNA is Ribonucleotide. Protein synthesis is the function of RNA.

The above biological molecules contain mainly Carbon (C), Hydrogen (H), Oxygen (O) & Nitrogen (N). We will conduct below mentioned activities to confirm the presence of those elements.

Identification of water as a constituent in food

Can confirm that water is formed on the glass sheet. Therefore the food that is used for the experiment contains water as a constituent.

Identification of presence of Carbon(C) in bio-molecules

Observation: Get lines drawn due to coal

Can confirm the food that is used for the experiment contains Carbon (C).

Identification of presence of Nitrogen(N) in bio-molecules

The above observation confirms the presence of protein in food. As Nitrogen is a constituent of proteins,it is confirmed that the above tissues contain Nitrogen. 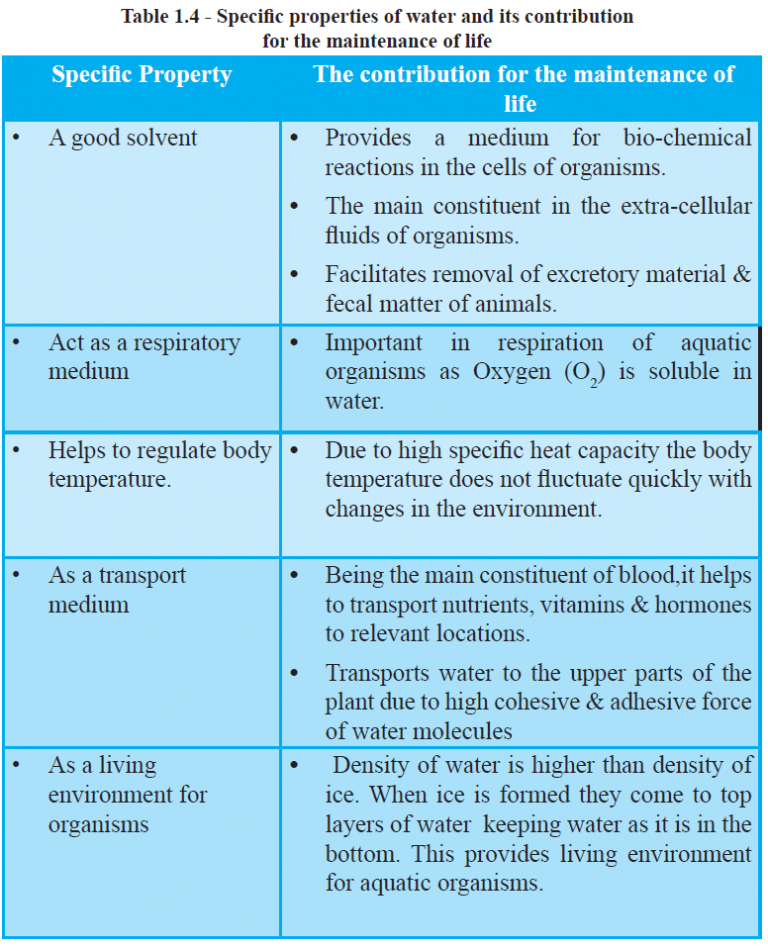 7% of the body weight is by minerals. ¾th of the above amount is by Calcium and Phosphorous. Other than that Potassium, Iron, Magnesium, Copper & Chlorine are also included. The elements are required in small amounts. But when they are not present in correct amounts, plants and animals show deficiency symptoms. 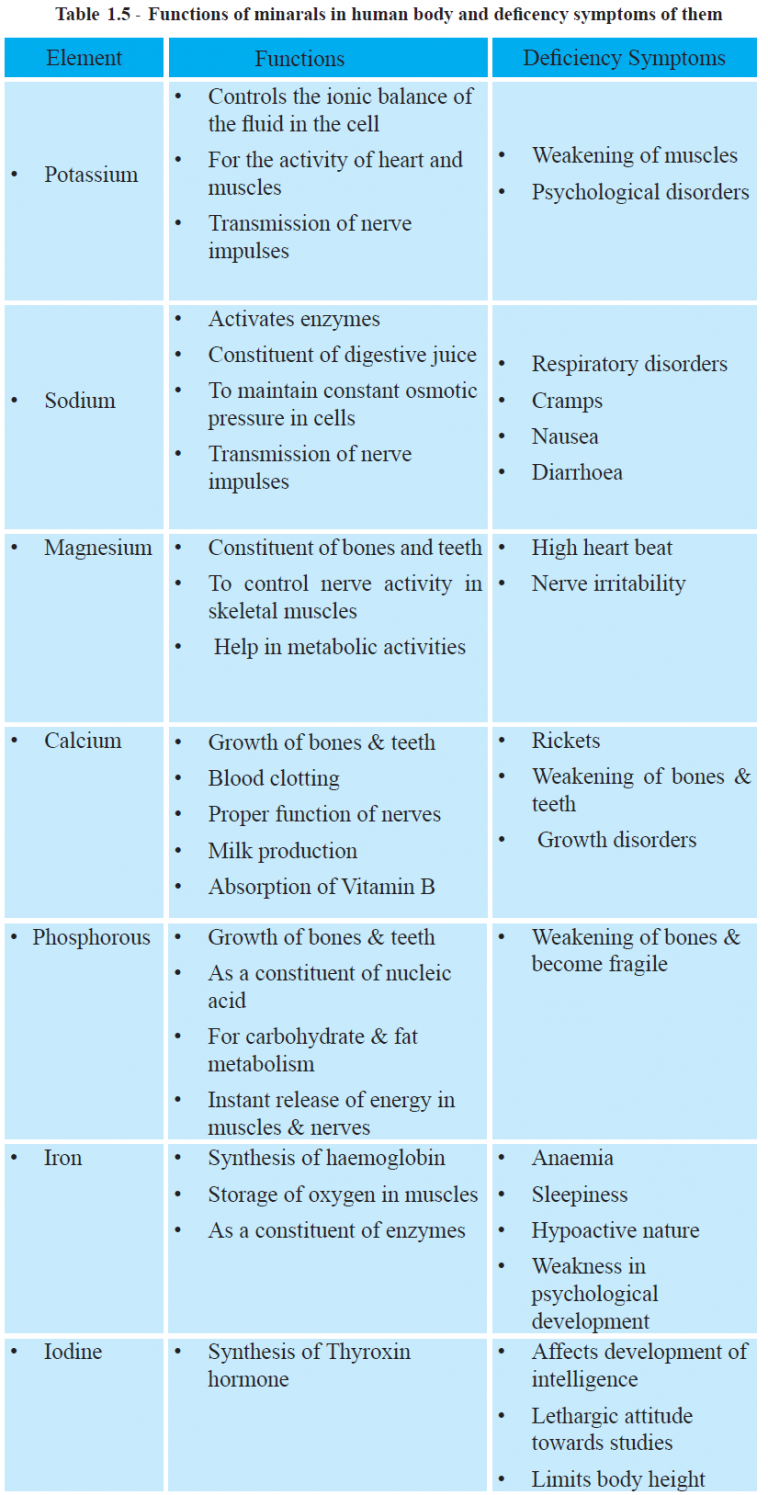 Functions of minerals in plants & deficiency symptoms of them are mentioned in the following table. 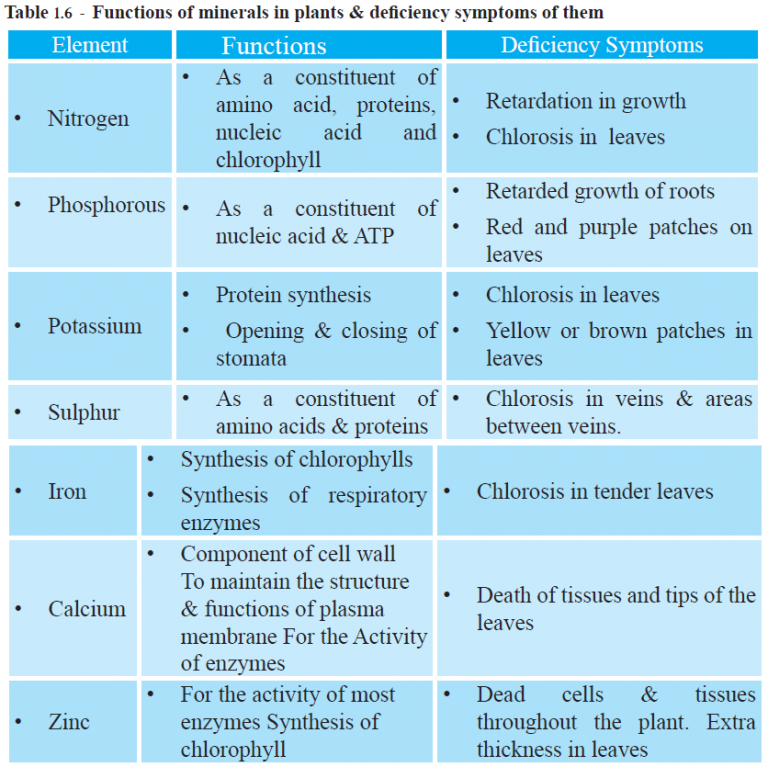 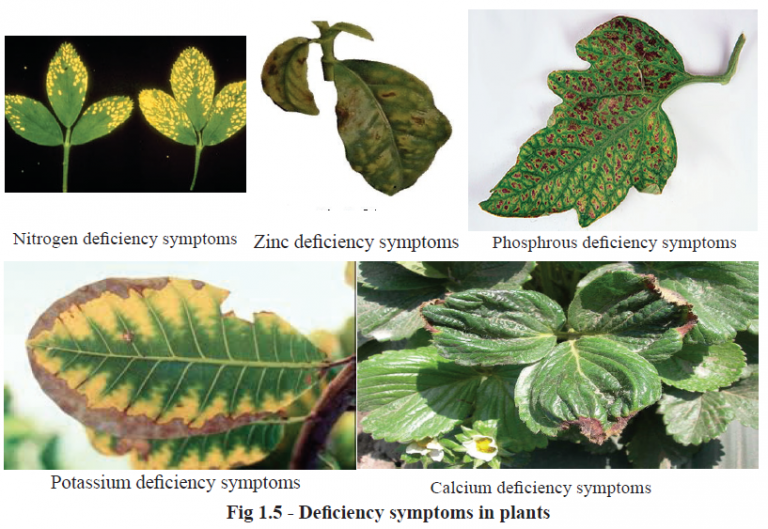 They are organic compounds important in bio chemical reaction. Vitamins can be classified into 2 groups according to the solubility in water. Vitamin B & C are water soluble and A, D, E, & K are insoluble in water. But these are fat soluble.

The vitamins are needed for activities of human body, Their uses and deficiency symptoms are given in the table below. 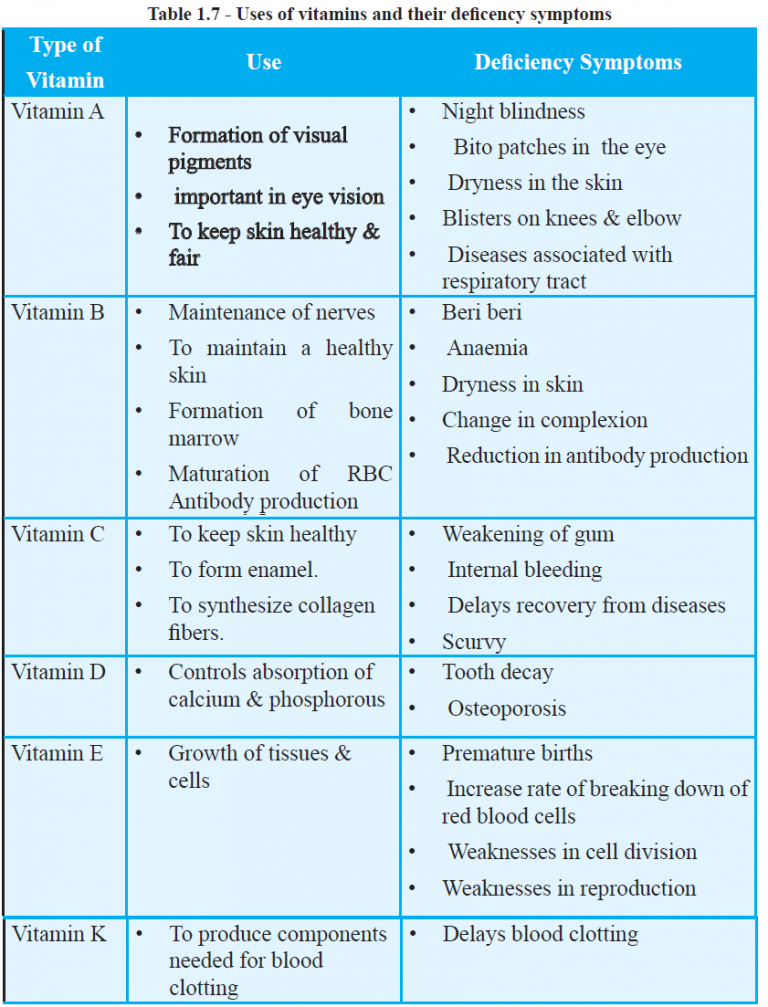 Vitamin B is a complex vitamin. There are vitamins as B1″ B2, B6, B12 in that complex’ these are obtained through food and some vitamins are synthesized by bacteria living in human intestine.