Subatomic particles were discovered during the 1800s. For our purposes we will concentrate only on three of them, summarized in Table 1. The proton is located in the center (or nucleus) of an atom, each atom has at least one proton. Protons have a charge of +1, and a mass of approximately 1 atomic mass unit (amu). Elements differ from each other in the number of protons they have, e.g. Hydrogen has 1 proton; Helium has 2. 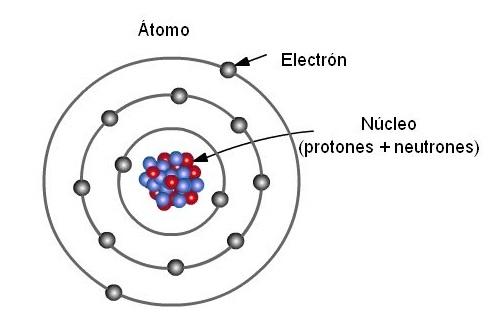 The neutron also is located in the atomic nucleus (except in Hydrogen). The neutron has no charge, and a mass of slightly over 1 amu. Some scientists propose the neutron is made up of a proton and electron-like particle.

The electron is a very small particle located outside the nucleus. Because they move at speeds near the speed of light the precise location of electrons is hard to pin down.

Electrons occupy orbitals, or areas where they have a high statistical probability of occurring. The charge on an electron is -1. Its mass is negligible (approximately 1800 electrons are needed to equal the mass of one proton).

Table 1. Subatomic particles of use in biology. 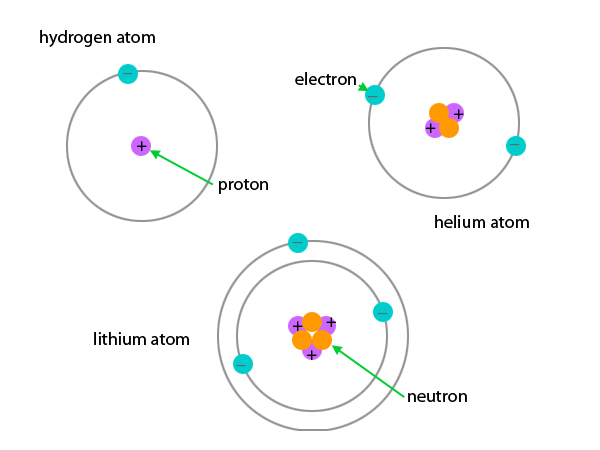 Figure 2. Carbon has three isotopes, of which carbon-12 and carbon-14 are the most well known. Image from Purves 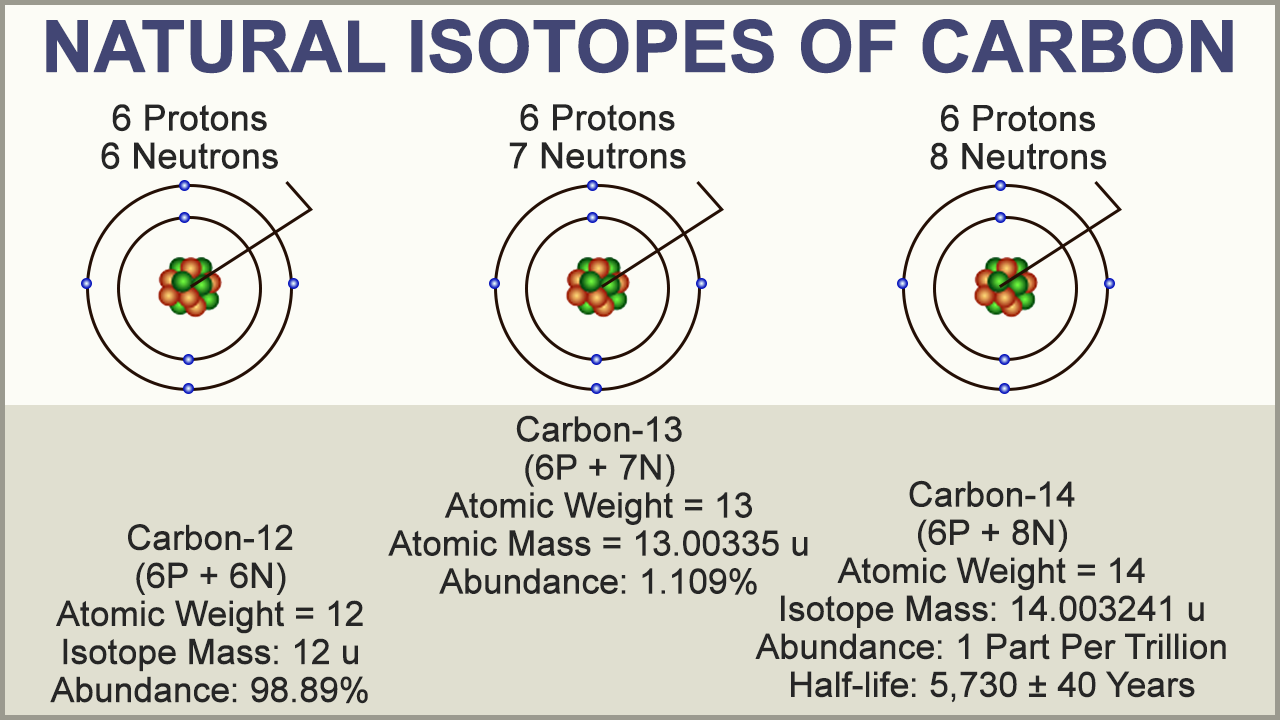 The Periodic Table of the Elements, a version of which is shown in Figure 3, provides a great deal of information about various elements. 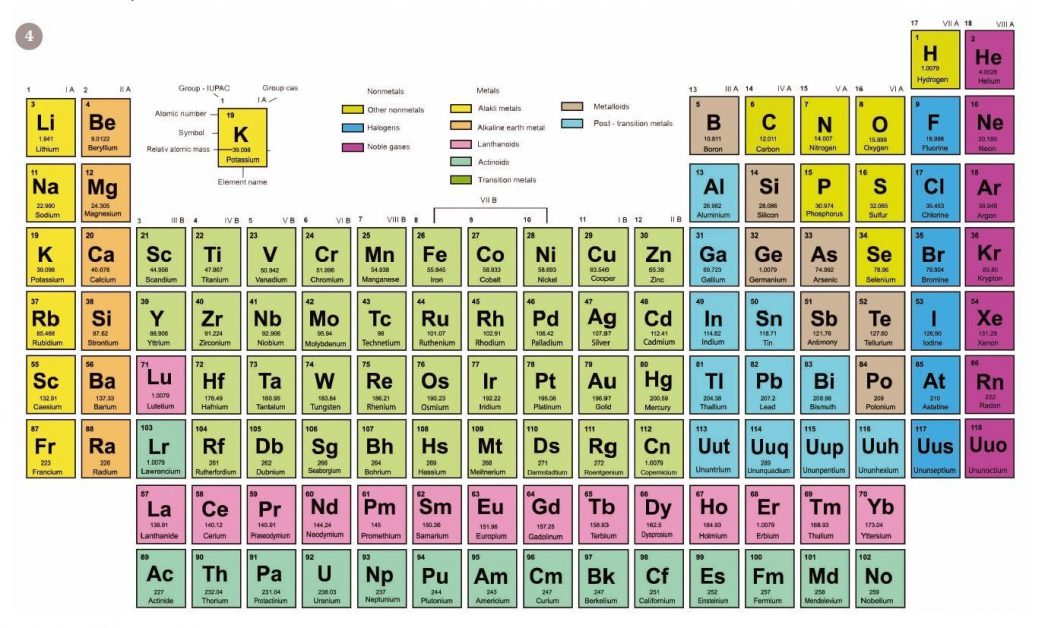 periodic table explained in the video below

When two or more elements are chemically joined, a compound is formed. Water, salt, and sugar are examples of compounds. When the elements are joined, the atoms lose their individual properties and acquire different properties. 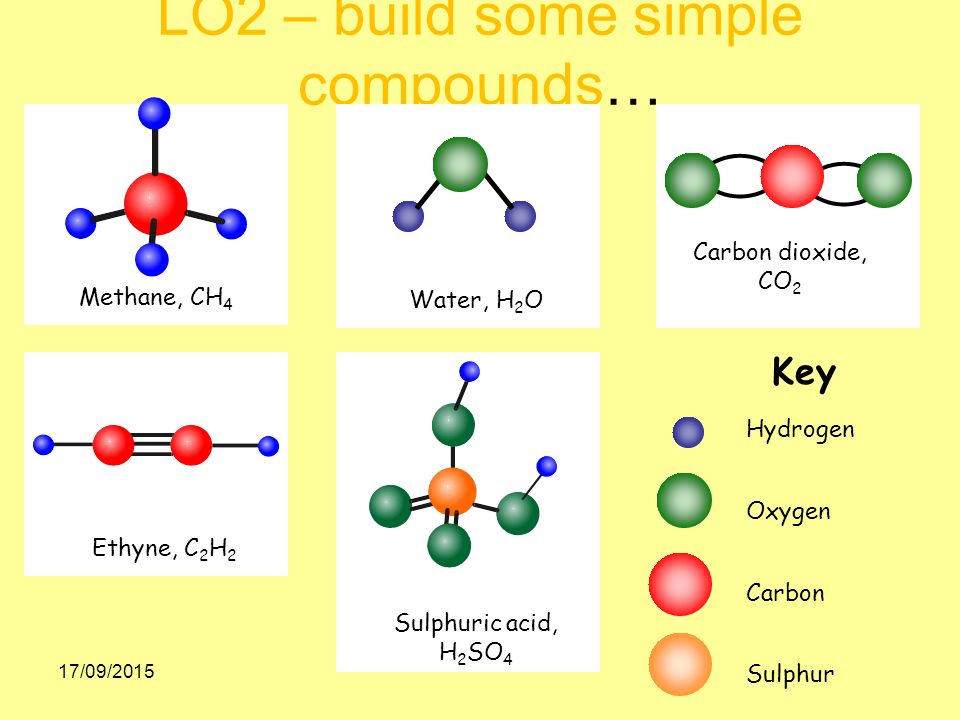 Some compounds are made of molecules (linked collection of atoms like H2O) and some are made of ions (positive and negative charged atoms) NaCl  is made of a number Na+ and Cl– ions in a three-dimensional array but NOT NaCl molecules.

A chemical formula is used a quick way to show the composition of compounds. Letters, numbers, and symbols are used to represent elements and the number of elements in each compound.

For example, ethanol (common alcohol people can drink) and dimethyl ether (a toxic compound) share the same molecular and empirical formulas but have a different structural formula. This means that the same atoms are arranged in a different way.

The condensed structural formula may omit the symbols for carbon and hydrogen in the structure, simply indicating the chemical bonds and formulas of functional groups. It is important because this formula indicates the position of the atoms and the functional group in the molecule structure, which is quite useful when studying organic chemistry. The written condensed formula lists the atoms in the order in which they appear in the molecular structure. For example, the molecular formula of hexane is C6H14, but its condensed formula is CH3(CH2)4CH3.

A chemical equation is a way to represent the processes that occur during a chemical reaction, using numbers and symbols.

The elements in an equation are denoted using their symbols. Coefficients next to the symbols indicate the stoichiometric numbers. Subscripts are used to indicate the number of atoms of an element present in a chemical species.

The participants in the chemical reactions are element symbols. In this reaction, C is carbon, H is hydrogen, and O is oxygen. Usually, you will need to know the element symbols, in order to understand the equations.

The reactants  are written on the left side of the arrow, and in this  reaction are CH4 + O2

The products are written on the right side of the arrow, and in this  reaction are  CO2  + H2O

The arrow between the reactants and products should point from left to right or, if the reaction is proceeding both ways, point in both directions (this is common). If your arrow points from right to left, it’s a good idea to re-write the equation the conventional way.

ions form and spread out in water. Note that the sum of the charges present on the left and on the right of the arrow, is the same: this reaction is chemically balanced.

An ion is an atom with more or less electrons than protons and therefore has a charge – either positive or negative.

If it has more electrons than protons it has a net negative charge and is known as an anion.

If it has fewer electrons than protons it has a net positive charge and is known as a cation.

The ionic state may be denoted as a following superscript (e.g. O2-, Fe2+). The number in front of the charge symbol shows how many electrons the atom has gained or lost. O2- is an oxygen atom that has gained 2 electrons.

The common ionic states of an atom are known as its valences.

Name and Formulae of Common Ions

I’m not going to repeat the diagrams, there’s no point, so I’m just outlining the ionic bond formation in s, p and d terms.

Most involve the ‘octet rule’ to form a noble gas electron configuration.

You need to be able to write the electron configuration of ions in terms of s, p and d orbital notation.

Which elements form ionic compounds? and how to work out and write an ionic formula?

Examples of how to work out an ionic formula

i.e. the valence or ionic charge = the combining power of the ion

‘molecular’ or ionic style of formula and compound name are shown

Example: A moderately difficult example to work out!

More examples of how to work out ionic formulae

When combined with other elements in simple compounds the name of the non-metallic element changes slightly from …??? to …ide.

The other element at the start of the compound name e.g. hydrogen or a metal like sodium, potassium, magnesium, calcium, etc. remains unchanged because there is only one oxidation state.

However, with different oxidation states the complications will arise e.g.

(i) Where an element can form two different compounds with different formulae with the same  element there needs to be a way of expressing it in the name as well as in the formula e.g.

Hear chlorine has a combining power of 1 (valence 1) and oxygen 2 in both compounds.

However, iron can have a valence of 2 or 3 and copper 1 or 2 and these also correspond numerically to the charge on the metal ions in such compounds e.g. Fe2+ and Fe3+, Cu+ and Cu2+.

Therefore the ‘Roman numerals’ number in (brackets) gives the valence of the element in that particular compound. At a higher academic level this is known as the oxidation state.

(ii) When the non-metal is combined with oxygen to form a negative ion (anion) ion which combines with a positive ion (cation) from hydrogen or a metal, then the end of the 2nd part of the name ends in …ate or …ite e.g.

NO3 in a compound formula is nitrate e.g. KNO3, potassium nitrate.

SO3 in a formula is sulphite, e.g. Na2SO3, sodium sulphite,