Animal husbandry is the branch of agriculture concerned with animals that are raised for meat, fibre, milk, eggs, or other products. It includes day-to-day care, selective breeding and the raising of livestock. Most livestock are herbivores, except for pigs and chickens which are omnivores.

Most farming communities choose between the exotic and the’ local breeds or their crosses depending on the environmental conditions.

Whatever production is undertaken, the returns depend mostly on the management levels provided to these animals.

A productive herd starts with good management of the young stock.

Raising of Young- Stock. The young one of cattle is known as a calf.

Newborn calves should be given colostrums within the first 3-5 days of their life.

Colostrum is important for the following reasons:

In this method, calves suckle the mother directly.

The calf is trained to feed from the bucket immediately after birth.

The calf is trained as follows:

The replacement stock includes young heifers and bulls which have been selected for breeding to replace the old stock.

Castration – for male calves not selected for breeding.

Removal of Extra Teats ;> These teats are known as supernumerary teats which make milking of the animal difficult.  They are clipped off with teat clippers.

Requirement of a Calf Pen;

These can be either permanent or mobile/movable.

Calves should be housed singly up to the age of 3 weeks, when they are put in group pens.

This is to avoid them licking each other and swallowing hairs which form indigestible balls.

Milk is the white lacteal substance secreted by the mammary glands of the female mammals.

Milk is secreted by the mammary glands which are an accessory gland of the reproductive system.

The mammary gland of a cow is known as an udder.

Structure of the udder 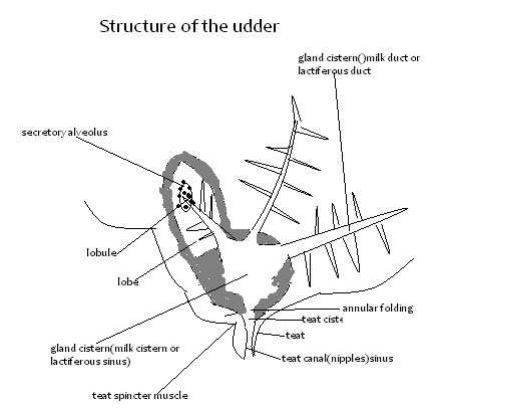 The udder is composed of the following parts:

The process of milk secretion is known as lactogenesis.

The digested food is taken to the udder via blood vessels.

In the udder, the nutrients are carried into the alveoli cells where metabolic reactions take place to build up these nutrients into milk.

A hormone prolactin is secreted by the pituitary gland which brings about lactogenesis.

The milk secreted is then stored in the upper parts of the udder waiting to be released.

The process of milk let-down occurs naturally when the animal is stimulated.

Milk secreted moves from the alveolar region through the ducts to the gland cistern.

Oxytocin, a hormone secreted by the pituitary gland causes the contraction of the udder muscles forcing the milk down the teats.

Oxytocin hormone lasts 7 -10 minutes in the bloodstream hence fast milking is important to withdraw the milk.

Milk is withdrawn from the teats by gently squeezing them.

The following factors are essential for clean milk production:

The animals are brought near the milking parlour 15-20 minutes before milking to get into the mood of being milked.

Milking materials such as equipment feeds, ropes, stools and salve are collected and placed near the milking parlour.

The animals are allowed into the milking stall one by one as the milking proceeds as follows:

The animal is restrained in the stall.

A feed is weighed and placed into the feed trough.

The udder is thoroughly washed, disinfected and dried with a clean cloth.

A strip cup is used to test for mastitis on each quarter.

Milking proceeds by squeezing the teats with the full hand. If machine milking the teat cups are placed on the teats.

For hand, milking start with the hindquarters and finish with the forequarters.

Fast milking should take about 8 minutes then end with stripping the udder.

The milk is weighed and recorded.

The animal is then released.

This is the infusion of antibiotics into the teat canal of a cow that is preparing for drying off.

It prevents bacterial infection which leads to mastitis.

Pasteurized milk – milk that is heated and cooled immediately.

Butter – Milk butterfat separated by a process known as churning.

Cream -A layer of is: that collects at the top of the milk when left to stand.

Cheese – Milk proteins which have been compressed.

Ghee – Milk fat made from heating cream or butter.