Much has been achieved in the past by traditional methods of animal breeding but the immense progress of recent years would not have been possible without new techniques and the adoption of co-operative measures. Artificial insemination and milk recording have effected great improvements in dairy herd performance. Techniques of egg implantation and oestrus control should enable productivity to be boosted in sheep and beef cattle as has been done in the dairy herd. 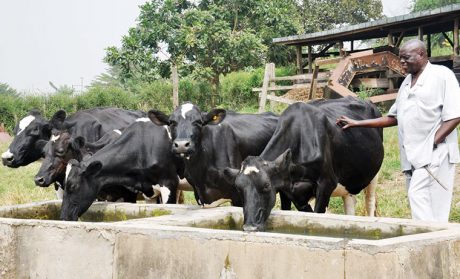 The breeding of animals is under human control, and the breeders decide which individuals shall produce the next generation. The breeder makes a choice.

The breeding of animals is based upon the fact that certain qualities are genetic, hence valuable qualities are passed on from parents to off -springs. The qualities can be maintained or improved in the next generation.

The performance of an animal is influenced by two major factors;

The genetic potential of an animal is inherited from its parents.

In selection and breeding animals with superior characteristics are selected and allowed to mate.

In the process they transmit the superior characteristics to their offspring.

When this is done over a long period of time, it results in livestock improvement.

Reproduction is the process by which off-springs are produced. All farm animals multiply by means of sexual reproduction.

It begins with fertilization which is the fusion of male and female gametes to form a zygote. Fertilization takes place internally in the body of the female. The embryo(zygote) formed develops inside body of mother, fed and protected until end of gestation period.
In poultry, the process is different in that eggs are fertilized internally but laid and development of the chick takes place outside during incubation.

In both male and female, certain organs are specialized for the process of reproduction.

Some of these organs secret fluids which are necessary for the movement and survival of the gametes(reproductive cells.)

These are introduced into female reproductive system, where they fuse with the sperm to form zygote.
The reproductive system(bull) is composed of the following parts;
i). Testes
ii). Epididymis
iii). Sperm ducts
iv). Accessory glands(Seminal vesicles and prostrate glands)
v). Penis 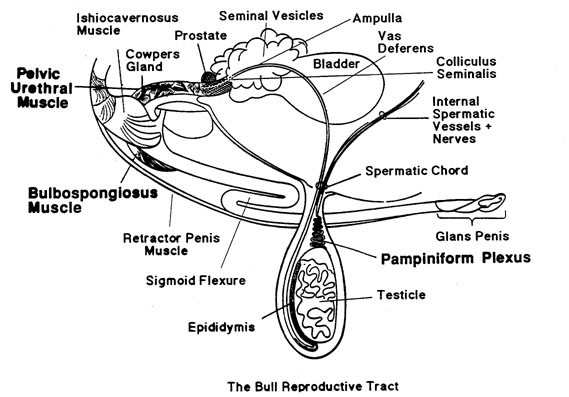 Prostate gland -produce fluid that neutralize the acidic effects of urine in the urethra preventing death of sperms.

Two ovaries located in abdomen, left and right. Produce ova/eggs and hormones which control sexual cycle. Oestrogen produced by graafian follicle inside ovary induces oestrus i.e. Heat period so that the cow shows signs of heat. The hormone oestrogen is produced under the influence of other hormone called the Follicle stimulating hormone.

After every 21 days the ovary releases a mature ovum and the cow comes on heat. The ovum travels through the fallopian tubes to the uterus.

The release and movement of the ovum down to the uterus is called ovulation. If mating is done at this time, fertilization will take place.
The fertilized egg implants itself onto the endometrium(walls of uterus)and develops into foetus.

Fertilization takes place here. Also a passage for the egg from the ovary to the uterus.

The vagina and Vulva:

Vulva is the external opening of female reproductive system.

It allows mating to take place so that sperms are deposited into the vagina.

The foetus and urine are removed through the vulva.

Pregnancy
is period between fertilization of ova and the expulsion of the foetus through the vulva. Also called gestation period. In cattle gestation period is 270-285 days. Ends with the birth of a calf.
The reproductive tract undergoes a period of rest during which it is repaired and returns to normal. During pregnancy, hormone called progesterone is produced by the placenta to maintain the foetus in the uterus.

Act of giving birth called parturition. This time the foetus expelled through the birth canal.

When an animal is about to give birth, it shows signs;-

Animal parturates within 2-3 hours after this signs. The correct presentation is with the front feet first ,and the head outstretched and resting in between the feet.
Any other presentation called mal-presentation or breech presentation and requires assistance.

The cock has no penis but a small opening near the vent through which sperms are emitted. Cock has testes within the body.

The hen has elongated oviduct for formation of an egg. Fertilization occurs internally.

During mating the cloaca of the hen and the vent of the cock fit into each other and then semen is poured into the cloaca ,then sucked to the oviducts.

The Reproductive System of a Hen 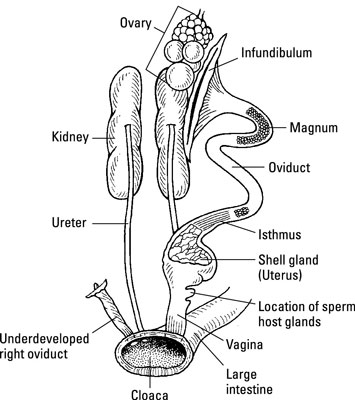 Hen has two ovaries but one functional. Ova is formed in ovaries.
About 3500-4000 ova present inside ovary held by follicle. Mature ovum released via rapture of follicle. It moves into oviduct received by the funnel.

Funnel(infundibulum)
Fertilization occurs here. Chalazae also added to yolk.
It also collects the ovum and stores the sperm. Time here is 15 minutes and it is 11.6cm long.

Magnum
Thick albumen is added and stays for 3hrs. its 33cm long.

Vagina
Short, 6.9cm long and for temporal storage of egg before laying

Cloaca
Egg moves out of cloaca through the vent and the cloaca extents out to prevent the egg from breaking.
NB;
Egg formation not depended on fertilization. Egg formation takes 24-26 hours.
The components of egg are obtained from body reserves of the hens body.

Selection is used as a tool for livestock improvement. A breeding stock is a group of males and females which act as parents of future generations.
Selection is the process of allowing certain animals to be parents of future generations while culling others.
Culling is the removal of animals which do not perform to the desired level, from the herd. The animals retained have certain desirable characteristics which make them produce more.Selected animals make up the breeding stock.
The breeding stock should pass the good qualities to their offsprings for better performance, to improve the livestock.
Selection process repeated for many generations increases chances of formation of desirable qualities in an animal.
Genetically termed as gene frequency(occurrence of the genes that carry desirable characteristics.) Selection increases occurrence of desirable genes and decreases occurance of undesirable genes.
During selection, the characteristics to be selected for are first studied closely to ascertain that it is not influenced by the environment, but mainly by the genetic make-up.
Selection helps improve characteristics which are highly heritable.
Heritability means the likelihood of a particular trait to be transmitted to the offspring and they are strongly inherited.
A character like milk yield is lowly heritable, i.e. it is weakly inherited and a bigger percentage of the character is affected by the environment.
The degree to which selection affects a character depends on the following factors;
– The heritability of the character,

– The intensity with which the selection is done and the interval between generations and kind of selection being practiced.

Factors To Consider When Selecting A Breeding Stock.

Good performance of animal indicated by;

Physical Fitness
Animals selected should be free from any physical defect e.g.

Adaptability
Animals selected should be well adapted to the prevailing climatic condition in the area e.g Ardi and semi arid areas.

SELECTION OF CATTLE AND SHEEP

Selection in cattle
Consider the following;

Selection in Camels
Consider the following;

Process of mating selected males and females to produce offspring with the desired characteristics.

Genetic transmission of characteristics from parents to offsprings.
The mechanism of inheritance is carried by the sex cells (gametes) and is controlled by genes found in the chromosomes.
Genes are very tiny units of inheritance carrying particular characteristics, such as colour, body shape and amount of milk production. Chromosomes are genetic materials which carry genes.
They exist in pairs paternal and maternal) in the nucleus f the body cells. They are always constant in number.

A dominant gene is one that suppresses the other. It produces a dominant characteristic.

A recessive gene is one that is suppressed by the other. It produces a recessive characteristic.

A hybrid is an animal which is the product of crossing animals of two different breeds. It has both a dominant and recessive characters. A superior hybrid has 75% dominance and 25% recessive.

Hybrid vigour or heterosis is increased vigour and performance resulting from crossing two superior breeds. When two superior breeds e.g Pedigree, Friesian and Jersey breeds are mate the resultant offsprings have both the character of high milk yield and high butterfat content. Thus it is said the offsprings have hybrid figure which is an increased performance and figure than both the two parents.

Epistasis: This is the masking of the effect of one gene (recessive gene) by another gene(dominant) which is non-allelic, that is situated on different locus. This is aimed at preventing the recessive gene from being expressed.

They are categorized into two namely; Inbreeding and Outbreeding

1. Inbreeding: Mating of animals which are related i.e have certain alleles of genes in common.
Reasons:

2. Outbreeding: Mating of animals which are not related.

Mating of unrelated animals from the same breed for example friesian cow in Uganda with Semen of friesian bull from Britain.

Mating where the female of a cow grade stock (locals) is mated with a pure breed sire. The resultant animal is referred to as a high grade.
If the same sire mates with filial generation (F1-6) of its heifers, it will attain a pure breed character. With Artificial insemination (A.I), the system is used widely to improve the local cattle for better milk production.

Cow should be served 12-18 hours after showing the first heat signs.

Heat signs in pigs occur after every 21 days. The heat lasts about 72 hours.

Sows or gilts should be served in 18 – 36 hours of the heat period.

Signs of Heat in pigs

Does are ready for mating 6-7 months of age. Heat signs occur every 14 days.

The doe should be taken to the buck and not vice versa.

Signs of Heat in rabbits

Methods of Service in Livestock 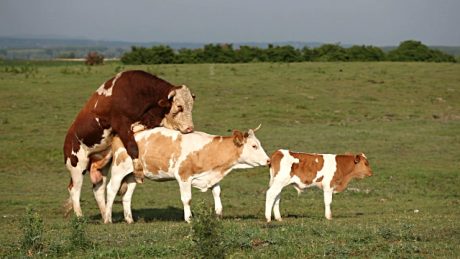 Introduction of semen into the female reproductive tract by artificial means.

It is the implantation of an embryo (fertilized ova) from a high quality female (donor) in the uterus of a low grade female (recipient).

Signs of Parturition in Livestock

Parturition is the act of giving birth in female animals.

The gestation period in pigs is about 4 months or 3 months, 3 weeks and 3 days.

The gestation period in rabbits is 28-32 days.