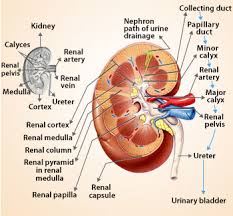 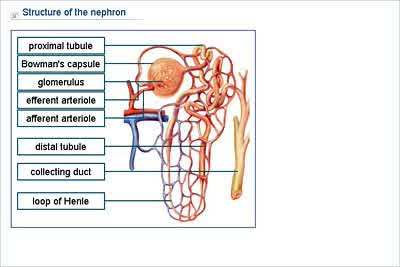 The nephrone is the basic is the structurak and functional unit of the kidney. A human contains approx. 1 million nephrones each approx. 3cm which offers a large surface area for exchange of material. The nephrone is made up of 6 parts.

Process that leads to urine formation

This is filtration under high pressure. The following is required for ultra filtration.

Adaptations for achieving the first condition

The blood passes through barriers as it is filtered from the glomerular capillary into the Bowman’s capsule.

The epithelial cells of the Bowman’s capsule called podocytes

It has numerous pores ~  0.14m in diameter large enough to allow through all components of plasma including plasma proteins except the cells.

Adaptations of the epithelial cells of the  capsule (podocytes)

Each cell (podocyte) bears numerous major processes from which minor foot life processes (pedicels) extend to the basement membrane of the capillary.

Narrow species lie adjacent epithelial cells which attach them to the basement membrane. These spaces allow passage of blood plasma into capsular space without giving much resistance.

The process with ultra-filtration is also facilitated by the capillary/glomeruli lying very close to the inner wall of the capsule. The high pressure developed forces the fluid component of blood together with dissolved substances into the capsular space. This hydrostatic pressure is opposed by the osmotic pressure of plasma proteins which tends to hold plasma back in the capillaries. However this is less than the hydrostatic pressure, so there will be a pressure gradient ensuring formation of glomerular filtrate.

The table showing the mean composition of human plasma and glomerular filtrate. 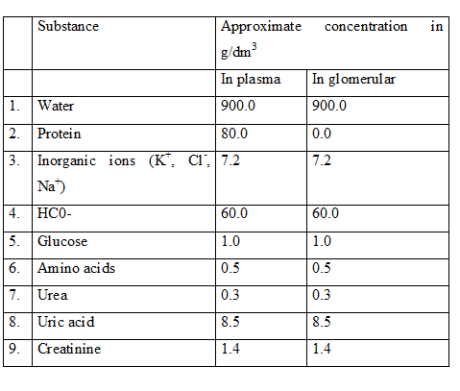 An investigation carried out to determine the rates of flow and the composition of fluids in the human kidney. These were measured at positions A, B, C, and D shown in the diagram below which represents a nephron and associated blood vessels. The results are given in the table.

Explain how the following are brought about.

Reduction in flow rate is due to decrease in volume of fluid because of reabsorption and widening of the bore of tube.

The smallest plasma proteins molecules have molecular weights of about 69000. Haemoglobin has molecular weight of about 65,000. If RBCs are damaged in the blood stream, hemoglobin may appear in the urine. Comment on the significance of this observation.

Tissue fluid must be in osmotic balance with tissue cells; this balance is affected by the amount of H20, salts and organic compounds in the fluids and the cells. Exactly how much H20 is lost in the urine varies under different conditions. A person may need to conserve H20 if much has been lost because of sweating, illness or low H20 intake acid, or taken in food with low salt content may need to lose much. The amount of H20 lost in urine is controlled by anticiurectic hormone (ADH) a.k.a vasopressin produced by neurosecretory cells of the hypothalamus and stored in the posterior lobe of the pituitary gland.

It then produces the neurocecretory hormone ADH

Response to H20 content in blood (e.g. during cold)

This is a condition in which excessive amount of watery urine is produced. It is due to lack of enough production of ADH. The person is said to suffer from diabetes inspidus.

Regulation of pH of blood and tissue fluid in human kidney at about 7.9. In the cells of the distal convoluted tubule, CO2, RNS with H20 to form H2C03 which dissociates to give H+ and HCO–3.

H+ are pumped into the lumen where they are buffered by NaHPC4.

It takes up H+ to form NaH2PO4 when the acidity of the renal fluid is exceptionally higher; the cells of the distal convoluted tubule produce NH3 form an amino acid called glutamine. NH3 combines with the excess NH+4 which are in excreted.