The mammalian ear has 2 main functions.

Structure of the mammalian ear 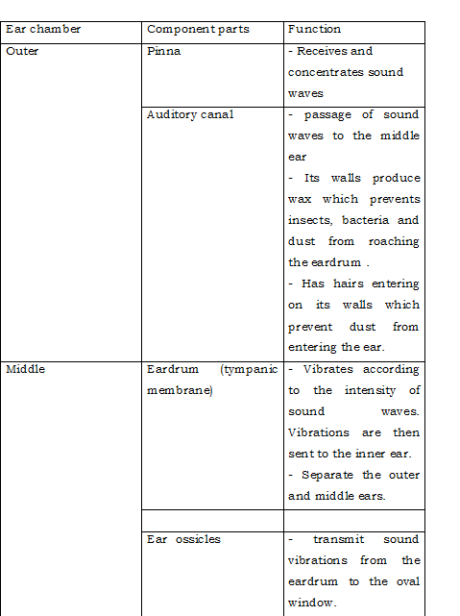 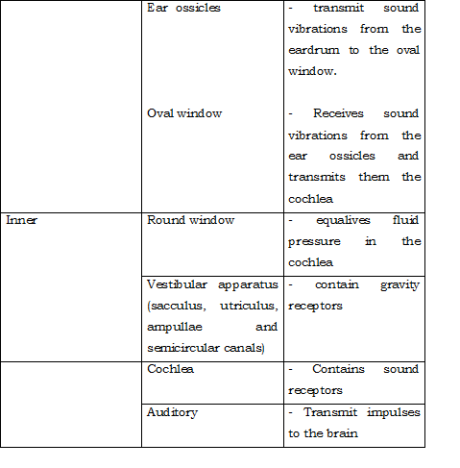 The ear consists of 3 diff mechana receptors located in diff areas in the inner ear which convert this mechanical energy into impulses  which are then transmitted to the brain via the auditory nerve. These mechano receptors are;

Mechanism of hearing (perception of sound)

Sound waves occur when an object vibrates. Its vibrations disturb particles in the medium around them. These vibrating particles cellide with other particles further away from the vibrating object. In the mammalian ear. The sound waves are received from the air where they are transmitted and funneled by the pinna. They are then transmitted to the tympanic membrane which cause it to vibrate. Vibrations are taken over by the ear ossicles and finally to the oval window which also vibrates. These vibrations then cause the perilymph in the cochlea to also vibrate. The vibrations of the perilymph owing to its higher density as compared to air require a greater force than that of the vibrating air particles. The ear ossicles act as levels and in the process magnify or amplify the vibrations of the tympanic membrane the oral window closes the entrance into the vestibular canal of the cochlea. Its vibrations are therefore passed first into the perilymph in the vestibular canal which cause the reissner’s membrane to vibrate. These vibrations cause the endolymph in the median canal to vibrate causing the basilar membrane to vibrate as well.

Vibration of the basilar membrane disturbs the sensory cells in the organ of corti during which their hairs are stretched or moved in someway or as a result of the disturbance of the tectorial membrane in which their hairs are embedded by vibrations in the middle canal. This causes the electrochemical changes to occur in the membranes of these cells just as in the nerve cell membranes as a result of which impulses are sent to the brain through the auditory nerve.

It is at this stage that the mechanical energy of vibration of membranes is converted into electrochemical energy of action potentials. The brain interpreters the stimuli as sound. Vibrations of the basilar membrane also disturb the perilumph in the tympanic canal but since the perilymph is incompressible, the pressure waves resulting from these vibrations are taken up by the membrane covering the round window.

The organ of corti consists if:.

Discrimination between sound perceived by the ear

When a sound sensation reaches the auditory centre in the brain, the brain is able to discriminate between its quality in terms of pitch and intensity.

The pitch of sound depends on its wavelength. High tones are a result of sounds of higher frequent at which the basilar membrane vibrates however, the structure of this membrane ensures that in particular, it is the length of its surface the vibrations cover that depend on their frequency, thus sounds of high frequent (low tones) travel much longer distances along the membranes. The cells of the organ of corti along the length of the basilar membrane also have diff freq the brain is :. Able to determine the pitch of each sound according to the source of the impulses from the cochlea.

Loudness depends on the amplitude of sound waves hitting the tympanic membranes which are then transmitted to the basilar membrane. Sound of high intensity (loud sounds) :. Result in large amplitude in the vibration of the tympanic membrane and a large displacement in the basilar membranes as a result of which impulses are set at higher frequency to the brain through the auditory nerve. The reverse situation occurs in case of sound of low intensity (soft sound). The receptor cells of the organ of corti are able to detect such diff in the displacement of the basilar membrane according to how many cells are stimulated I a particular instance. Certainly a soft sound stimulates only a few receptor cells while a loud sound of the same frequency stimulates more receptor cells. (An example of spatial summation).

The vestibular apparatus which is the largest part of the membranous labyrinth consists of 3 semi circular canal lying in different planes, the utricule (utriculus) and saccule (saccculus). The term membranous labryth and often used to refer to the system of fluid filled interconnecting tubes which makeup the inner ear and thus includes the above structure and the cochlea.

The whole of the vestibular apparatus is filled with endolymph just like the middle canal of the cochlea with which it connects.

This is a function of both the utricule and saccule which contain groups of receptor cells in structures known as maculae have hair like projection which are embedded in a mass of jelly like material containing calcium carborate crystals known as the etolith and it is on this principle that they are able to detect and give information to  the brain about the position of the head.

Structure of an otolith and maculae 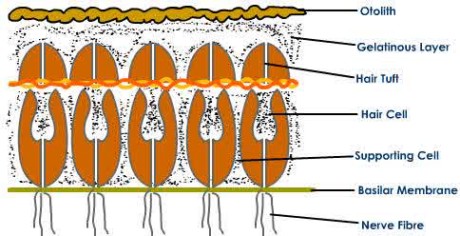 Perception of movement of the head

It is a function of the semi-circular canals which are arranged so as to lie at right – to one another. This arrangement enables movement of the head in any direction to be detected. Each semi- circular canal has an ampulla with receptor cells located in groups known as crista. The sensory cells of the crista have sensory projections embedded in a jelly like structure called capula.

Movement of the head in one direction causes the endolymph in the semi-circular canal in the plane in which such movement occurs to move in the opp direction, causing the capula to move in the same direction. This stretches the sensory hair cells on side of the crista causing a generator potential to occur in their receptor cells and if it is big enough, impulses are sent to the sensory neurons which lead into the vestibular nerve cone of the auditory nerve which leads them to the brain which interprets them into the appropriate movements of the head.

Other than the vestibular apparatus, balance in a mammal also depends on stimuli reaching the brain from:-