Animals are divided into:- 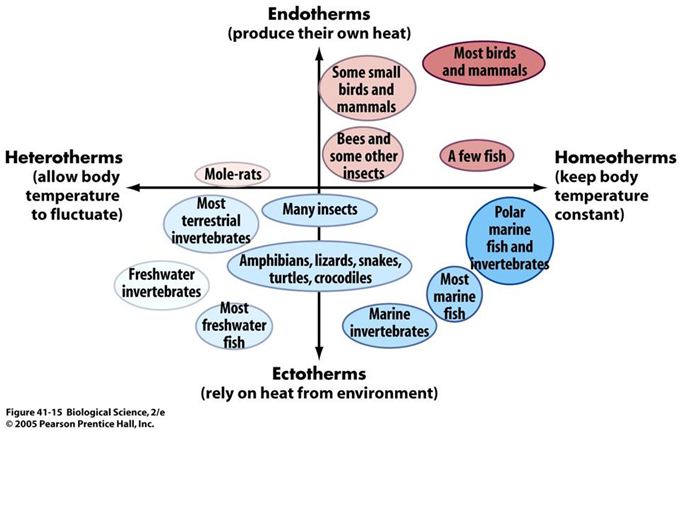 How heat is lose and gained by organisms.

Regulation of temperature in ecototherms

They majorly use behavioural methods e.g.

Diapouse occurs in insects. Diapause is a form of dormancy that occurs at any stage in the live cycle of an insect (ie egg, larva, pupa, adult, rymph). It is related to photoperiod and is a seasonal adaptation that through changes in brain secretion enables the species to survive hazardous environmental conditions and produce offspring in favourable conditions.

Very few show a slight degree of thermoregulation through activity of pigment cells which occur in their skins. In some reptiles a high temperature (40 0C) leads to bleaching of the colour to decrease heat absorption. A low temperature (50C) causes darkening and hence increased heat absorption

The colour changes are brought about by chromotophores in the stein.

Regulation of temperature in endotherms

Response to cold by an endotherm:- 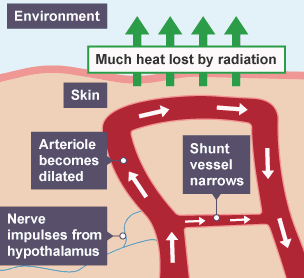 Extremities of animals in cold regions are maintained at lower temperature, than the core body temperature; reducing the temperature gradient between them and the environment. Reduction of heat loss from these extremities is achieved by counter current heat exchanges which occur e.g. in limbs of certain binds and mammals like flippers of the whale, limbs of ducts, human foot and hands that are in contact with the cold environment.

temperature induce in increased activity of adrenal, thyroid and

metabolism and production of heat.

Insulation is also achieved by an external covering of fun and feather which are denser and thicker for cold region dwellers than those in hot regions. Both function by trapping warm air net to the body

THIS VIDEO TEACHES ABOUT ENDOTHERMS AND ECTOTHERMS