This unit discloses on temperature and various absorption and regulation mechanism procedures in the body.

The efficiency range of thermal neutrality

The graph shows that above the high critical temperature, the body’s cooling mechanisms fail, the metabolic rate increases as temperature rises.

Below the low critical temperature, physical mechanisms are helped by chemical means. The metabolic rate increase as temperature falls.

Animals living in cold places have a lower critical temperature than those living in warm places.

Also the curve for the metabolic rate below critical temperature is less steep and lower lethal temperature much lower for cold dwellers than for warm dwellers as shown below.

Man is disadvantaged cause he is endothermic with a high critical temperature of ~ 27; yet with skunty hair, he would not have explored the temperature regions and the poles had he not used behavioural methods of putting on clothes.

Plant tissues can generally tolerate wide fluctuations in temperature than most animals but need to thermo regulate to avoid enzymes denaturing and tissues freezing. Plants gain and loss heat by the same physical processes as animals ie radiation, conduction, convection and evaporation.

Transportation results in cooling of the plant.

Plants with in dry condition, parenchyma cells turgidity and leaves and stems droop. This reduces the SA exposed to the sun.

Heat gain is less frequently a problem to plants.

Plants of different regions are adapted to different temperature ranges, hence plant in temperature regions thrive best between 250C and 350C whereas the optimum conditions for the aratic ad alpine plants may be as low as 150C skin, kidney, liver, lungs.

These are produced by catabolism of proteins and nucleic acids.

The immediate nitrogenous waste product of deamination of proteins is ammonia.

Ammonia may be excreted immediately on converted into the major nitrogenous compunds i.e. urea and uric acid with differ in their solubility and toxicity.

The nature of the excretory product is determined by;

Classification of animals according to the nature of their excretory nitrogenous product.

There are three types:-

Summary of the major difference among the three types 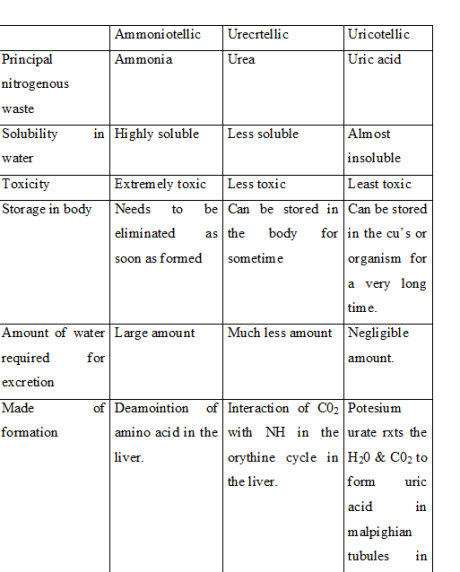 There is a degree of correlation between excretory products, embryonic environment and at adult habitat e.g. the tadpole excretes, ammonia while the adult amphibians excretes urea.

Less toxic and less soluble than ammonia hence less water needed for its excretion because the tissues can tolerate large concerns of it.

Uric acid and its salts are ideal excretory products for terrestrial organisms and organisms producing dei…….. eggs (shelled eggs) since they combine a high nitrogen content with low toxicity and low solubility. They can be stored in cells tissues and organs without producing any toxic or adverse osmeregulatory effects, and require a minimal amount of water for the excretion.

As the concentration with uric acid in the tissue rises, it settles out as solid orystals or precipitate.

Humans and apes excrete small quantities of uric acid produced from the break down of nucleic acid but not from breakdown with proteins.

Other examples of nitrogenous excretory products.

Purines, adenine and guanine are excreted directly by spiders and some animals but in other organisms these are broken down into uric acid.

Why is it that even when a person stops taking proteins in their diet, he still excretes urea.

This is the passing back of the useful substances of the giomerular filtrate into the blood flowing in the surrounding capillaries so that they are not lost with urine.

This occurs mainly at the proximal and distal convulated tubules, although the loop of henic and collecting duct also help in reabsorption of water.

Structure of convoluted tubules in relation to function. 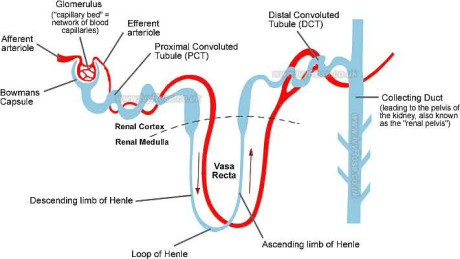 Adaptions of convoluted tubules to their function.

Over 80% of the glamerular filtrate is reabsorbed in the proximal convoluted tubule, including all glucose, amino acids, vitamins, hormones and 25% of sodium chloride and water.

The mechanism of reabsorption occurs as follows.

Glucose, amino acids and ions are actively transported out of the cells of the proximal convoluted tubules into the intercellular spaces and basal channels.

Reabsorption of H20 is mainly by osmosis. The blood in the capillaries surrounding the proximal convoluted tubule is derived from the efferent vessel of the glomerulus. It is therefore rich in protein which exerts an osmotic pressure yet it is under low hydrostatic pressure. This is further raised by the active uptake of sodium ions and Cl–. This causes water proximal convoluted tubule.

Reabsorption of water by loop of Henle.

It uses the principle of the hair-pin counter current multiplier.

Adaptations to achieve to act as a hair pin counter current multiplier.

Since the interstitial region (extracellular fluid) of the medulla is more concentrated due to the high concentration of Na+ and Cl– pumped into it, water is drawn out of the filtrate in the descending limb by osmosis, which id freely permeable to it, but impermeable to Na+ and Cl–. The H20 is hen drawn into the vasoractor and carried away.

Therefore at this point, tabular fluid is hypertonic to blood.

The composition of urine is also affected by substances actively secreted directly into it, intestinal fluid surrounding tubules. This occurs in both proximal and distal convoluted tubules but mainly in the latter.

These include; K+, H+, NH+4, and nitrogenous excretion like urea, uric acid, creatinine and drugs like penicillin.

If the pH starts to fall below norm, H+ are secreted from distal convoluted tubule into filtrate also the kidney cells.

Also kidney cells make and secrete ammonia ions with combine with anions brought to the kidney and excreted as ammonium salts.

If the pH rises, the tubule secretes bicarbonate ions into the filtrate A. while pH of blood; is maintained within a narrow range.

Table showing composition of plasma and urine and changes in concentration. 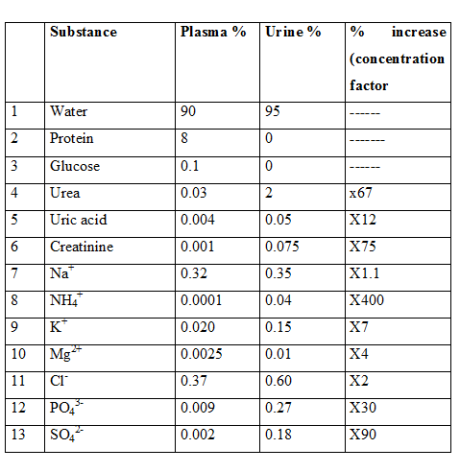