ALBIO5: STRUCTURE OF THE LIVER

This unit dwells on how the liver functions.

The liver is the largest and most diversified organ within the body and contributes 5% of the total body mass with large blood supply.

It has below diaphragm and made up several lobes/lobule; cylindrical in shape C ~ 1mm in diameter.

Each lobule is filled with liver cells called hepatory tess radiating from the centre towards the periphery.

Liver  cells/hepatocytes are simple in structure, undifferentiated and all identical (uniform) in appearance; metabolically active; with large nuclei, prominent golgi apparatus and many mitochondria.

Blood supply to liver is from two sources:-

The liver sheds its products e.g. glucose, plasma protein, urea, cholesterol CO2 into the hepatic artery and hepatic portal vein is mixed in spaces called sinusoids surrounded by hepatocytes. This increase 02 content of blood from hepatic portal vein, avoiding enough 02 to hepatocytes for their needs.

Hepatocytes secrete bile from the breakdown of blood into spaces called canaliculi and from these biles drains into bile ductiles which take it to the gall gladder.

The liver cells specialized cells attached to the walls of the sinusoids called kupffer cells that are part of reticule entothelial system.

This body cannot store excess protein or amino acids. If more protein is eaten, that is used to build up muscle, or in cellular respiration the excess are deaminated together with amino acids not immediately required 4 protein synthesis or glyconeogenesis.

Deamination involves enzymatic removal of the amino (-NH2) group from the amino acid along with a hydrogen atom to ammonia.

Ammonia may be used for synthesis of certain amino acids, nitrogen bases like adenine and guanine or excreted.

The non nitrogenous parts of amino parts of amino acids (the organic acid) can be oxidized to carbohydrate (glucose) that can be used in respiration or turned to fat or glycogen and stored.

Two molecules of NH3 and 1 mole of CO2 are used to produce one molecule of urea Co (NH2) as follows:-

One molecule of ammonia from deamination condenses with C02 and ornithine (a non essential amino acid) and looses one molecules of water to form citrulline.

Citrulline condenses with another molecule of ammonia, releasing one more molecule of water and forms orginine (a non essential amino acids).

Addition of a water molecule in presence of anginase enzyme to anginine hydrolyses it to one mole of onnithine and one mole of urea.

The ornithine regenerated is then used to repeat the cycle

The cycle is controlled by enzymes and ZATPs are needed to produce one mole of urea.

Is the synthesis of amino acids deficient in diet by enzymatic transfer of the group from an amino acid to a carbohydrate in the form of a keto acid by exchanging radicals between the amino acid and a keto acid. 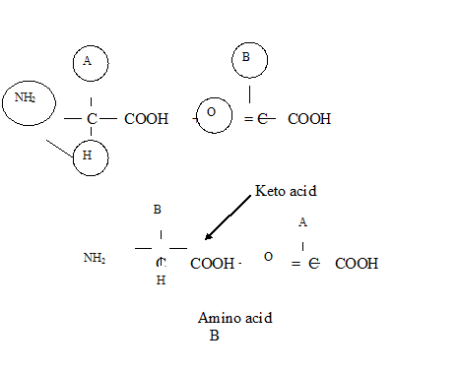 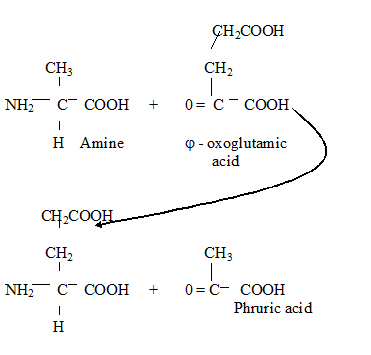 The role of the liver in carbohydrate metabolism is to regulate blood glucose at the normal level of 90mg/100cm3 of blood.

All hexose sugar like galactose and fructose are converted to glucose by the liver and stored as glycogen.

When glucose levels rise above norm, the beta (5) cells of islets of longerhans of the pancreas are stimulated to secrete insulin that facilitate conversion of glucose to glycogen; a process known as glyconesis.

Glycogenesis process is summarized in the equation:-

Lactic acid produced by anaerobic respiration in skeletal muscle can be converted later into glucose and then glycogen in the liver in a pathway known as coricycle. This lactate mechanism is initiated by lactate – dehydrogena and proceeds as follows.

Glucogenolysis can also occur under influence of hormone adrenaline.

When glycogen store in liver and musclwea iausted and no more glucose produced from them; glucose can be synthesized from non carbohydrate.

Low levels of glucose also stimulates hypothalamus to release CRF (conticortrophic factor) which in turn releases adrenocorticotrophic hormone (ACTH) from anterion pituitary gland that leads to synthesis and release of gluccorticoid hormones cortisone and hydrocortisone. These stimulate glyconeogenesis also be increasing rate of synthesis of enzymes in liver which convert amine acids and glycerol into glucose.

Beta (b) cells of islets of langenhans in pancrease (hyperglycemia)  are induced to produce insulin which:-

Facilitates convention of glucose to glycogen and stored in liver cells muscles (glycogenesis).

Glucose is converted to fat and stored in adipose cells.

When the glycogen stores are over and no more glucose released from them; another hormone called cortisone secretes secretes from adrenal glands to promote glyconecogenesis

Effect of a malfunctioning pancreas

When the pancreas fails to function properly, it will not perform its exocrine and endocrine roles in the body.

The pancreas would not secrete pancreatic juice which is digestive and contains the enzymes; pancreatic amylase and pancreatic lipase, inactive trypsinogen and chymotrypsinogen.

Hence no hydrolysis/digestion of starch to maltose. Lipids to fatty acids and glycerol and of proteins to polypetides.

The j-cells of islets of langerhans will not secrete glucagons; hence low blood sugar cannot be raised; because glycogenolysis cannot occur, person then suffers from a hypoglycemia hypoglycaemia.

The b-cells of islets of langerhans will not secrete insulin, so blood sugar level may rise above norm and could be excreted in urine a condition known as glycosisria and the person is said to suffer from diabetes mellitus; because the convernsion and storage of excess glucose to glycogen (glycogenesis) in the liver will not take place;

Also increased uptake and metabolism of glucose by liver and muscle cells will not occur.

And synthesis of fat and proteins from excess glucose will take place.

There are two forms with different causes.

Insulin cannot be taken orally because being a protein, it would be digested in the alimentary canal.

At times, late on diabetes in adults could be due to take place of insulin.