This unit dwells on the structure of the cell membrane and their different functionalities.

The cell membrane (or plasma membrane) surrounds all living cells, and is the cell’s most important organelle. It controls how substances can move in and out of the cell and is responsible for many other properties of the cell as well. The membranes that surround the nucleus and other organelles are almost identical to the cell membrane. Membranes are composed of phospholipids, proteins and carbohydrates arranged in a fluid mosaic structure, as shown in this diagram. 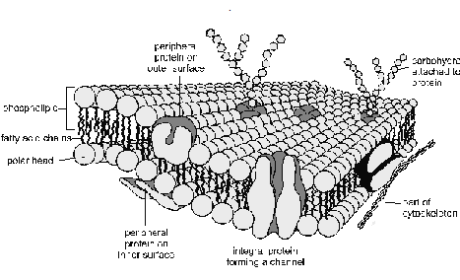 The phospholipids are arranged in a bilayer, with their polar, hydrophilic phosphate heads facing outwards, and their non-polar, hydrophobic fatty acid tails facing each other in the middle of the bilayer. This hydrophobic layer acts as a barrier to all but the smallest molecules, effectively isolating the two sides of the membrane. Different kinds of membranes can contain phospholipids with different fatty acids, affecting the strength and flexibility of the membrane, and animal cell membranes also contain cholesterol linking the fatty acids together and so stabilising and strengthening the membrane 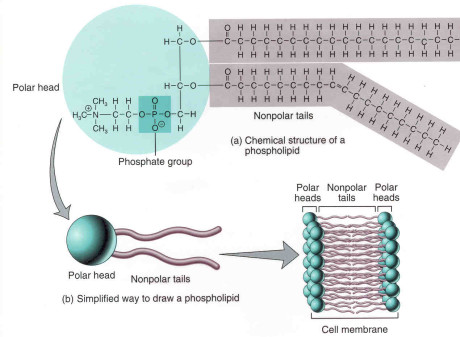 The proteins usually span from one side of the phospholipid bilayer to the other (integral proteins), but can also sit on one of the surfaces (peripheral proteins). They can slide around the membrane very quickly and collide with each other, but can never flip from one side to the other. The proteins have hydrophilic amino acids in contact with the water on the outside of membranes, and hydrophobic amino acids in contact with the fatty chains inside the membrane. Proteins comprise about 50% of the mass of membranes, and are responsible for most of the membrane’s properties.

The carbohydrates are found on the outer surface of all eukaryotic cell membranes, and are attached to the membrane proteins or sometimes to the phospholipids. Proteins with carbohydrates attached are called glycoproteins, while phospholipids with carbohydrates attached are called glycolipids. The carbohydrates are short polysaccharides composed of a variety of different monosaccharides, and form a cell coat or glycocalyx outside the cell membrane. The glycocalyx is involved in protection and cell recognition, and antigens such as the ABO antigens on blood cells are usually cell-surface glycoproteins.

Remember that a membrane is not just a lipid bilayer, but comprises the lipid, protein and carbohydrate parts.

Cell membranes are a barrier to most substances, and this property allows materials to be concentrated inside cells, excluded from cells, or simply separated from the outside environment. This is compartmentalisation is essential for life, as it enables reactions to take place that would otherwise be impossible. Eukaryotic cells can also compartmentalise materials inside organelles. Obviously materials need to be able to enter and leave cells, and there are five main methods by which substances can move across a cell membrane:

A few substances can diffuse directly through the lipid bilayer part of the membrane. The only substances that can do this are lipid-soluble molecules such as steroids, or very small molecules, such as H2O, O2 and CO2. For these molecules the membrane is no barrier at all. Since lipid diffusion is (obviously) a passive diffusion process, no energy is involved and substances can only move down their concentration gradient. Lipid diffusion cannot be controlled by the cell, in the sense of being switched on or off.

Osmosis is the diffusion of water across a membrane. It is in fact just normal lipid diffusion, but since water is so important and so abundant in cells (its concentration is about 50 M), the diffusion of water has its own name – osmosis. The contents of cells are essentially solutions of numerous different solutes, and the more concentrated the solution, the more solute molecules there are in a given volume, so the fewer water molecules there are. Water molecules can diffuse freely across a membrane, but always down their concentration gradient, so water therefore diffuses from a dilute to a concentrated solution. 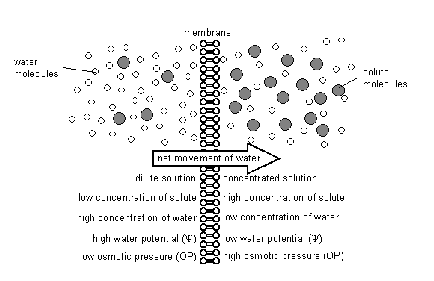 Water Potential. Osmosis can be quantified using water potential, so we can calculate which way water will move, and how fast. Water potential (Y, the Greek letter psi, pronounced “sy”) is simply the effective concentration of water. It is measured in units of pressure (Pa, or usually kPa), and the rule is that water always “falls” from a high to a low water potential (in other words it’s a bit like gravity potential or electrical potential). 100% pure water has Y = 0, which is the highest possible water potential, so all solutions have Y < 0, and you cannot get Y > 0.

Osmotic Pressure (OP). This is an older term used to describe osmosis. The more concentrated a solution, the higher the osmotic pressure. It therefore means the opposite to water potential, and so water move from a low to a high OP. Always use Y rather than OP.

The effects of these solutions on cells are shown in this diagram: 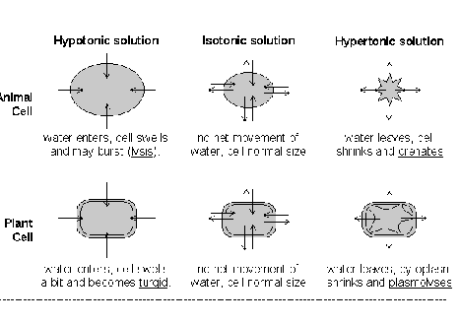 These are problems that living cells face all the time. For example:

Carrier Proteins have a binding site for a specific solute and constantly flip between two states so that the site is alternately open to opposite sides of the membrane. The substance will bind on the side where it at a high concentration and be released where it is at a low concentration.

Active transport is the pumping of substances across a membrane by a trans-membrane protein pump molecule. The protein binds a molecule of the substance to be transported on one side of the membrane, changes shape, and releases it on the other side. The proteins are highly specific, so there is a different protein pump for each molecule to be transported. The protein pumps are also ATPase enzymes, since they catalyse the splitting of ATP g ADP + phosphate (Pi), and use the energy released to change shape and pump the molecule. Pumping is therefore an active process, and is the only transport mechanism that can transport substances up their concentration gradient.

The Na+K+ Pump. This transport protein is present in the cell membranes of all animal cells and is the most abundant and important of all membrane pumps.

The Na+K+ pump is a complex pump, simultaneously pumping three sodium ions out of the cell and two potassium ions into the cell for each molecule of ATP split. This means that, apart from moving ions around, it also generates a potential difference across the cell membrane. This is called the membrane potential, and all animal cells have it. It varies from 20 to 200 mV, but and is always negative inside the cell. In most cells the Na+K+ pump runs continuously and uses 30% of all the cell’s energy (70% in nerve cells). 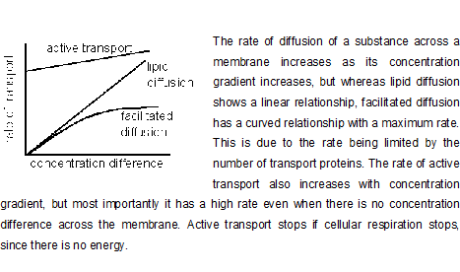 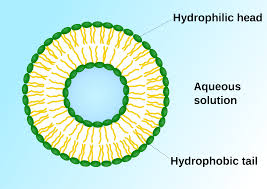 The processes described so far only apply to small molecules. Large molecules (such as proteins, polysaccharides and nucleotides) and even whole cells are moved in and out of cells by using membrane vesicles.

.Endocytosis is the transport of materials into a cell. Materials are enclosed by a fold of the cell membrane, which then pinches shut to form a closed vesicle. Strictly speaking the material has not yet crossed the membrane, so it is usually digested and the small product molecules are absorbed by the methods above. When the materials and the vesicles are small (such as a protein molecule) the process is known as pinocytosis (cell drinking), and if the materials are large (such as a white blood cell ingesting a bacterial cell) the process is known as phagocytosis (cell eating). 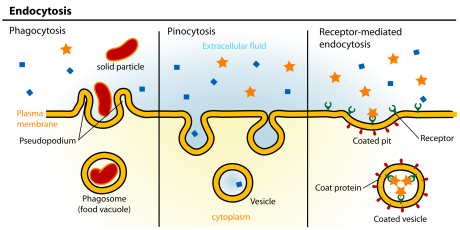 Sometimes materials can pass straight through cells without ever making contact with the cytoplasm by being taken in by endocytosis at one end of a cell and passing out by exocytosis at the other end.