Total size of a population is the number of individual in the population. The total size is not commonly used because it’s difficult to demarcate boundaries between different population especially ectonal zones. Population density is therefore preferred cause it considers the number of organisms per unit area on volume of the environment.

Density is often related to size with larger organisms being of low density. As well as varying from place to place. Population density also varies in time.

It follows that population may remain constant, fluctuate on they may steadily increase or decrease.

Factors that of interest in as far as population increase or decrease in concerned include:

Population density is population in relation to some units of space. It is usually expressed as the number of individuals on the population biomass per unit area on volume.

A wide variety of attrilates can serve as biomass units ranging from dry weight to NDA or RNA content in a given volume/area. It is important to know whether a population is changing than the know its size at any one moment e.g. the number of birds seen per hour or the numbers of various kinds e.g. the % of sample plots occupied by a species of a plant. The effect that a population exerts on the community and the ecosystem depends on only on the kind of organism indirect but also on how many; e.g. one crown in 100 acres of maize would have little effect on the yield and this would cause the farmer no concern but 1000 crows per 100 acres would be something else.

The population of mammals as a class as reflected by the biomass ranges over 5……of magnitude.

From the figure, the deer, wood chunt and vole which are foliage caters (herbivores) register the highest biomass (quantity if i.e. between 0.9 to 70kg/hectare). This is followed by the seed fruit eaters (ii) the mouse, rat and squired which ranges from 0.9%. This is followed by omnivores, skunk, fox and black bean (0.001 to 1kg/hectare).

The meat eaters register the lowest biomass i.e. the weasel, lynx and congar ranging from 0.0009 to 0.04kg/hectare.

The range for any given spcies in each trophic level is much less compared to the mammals as a class.

The large difference in magnitude regarding biomass for the mammals as a class is possibly due to the fact that these mammals occupy different tropic level.

This is the spartial pattern of individuals in a population relative to the another. The basic patterns are the;

In regular dispersion, individuals are more or less equidistant from each other. This is rare in nature but common in managed systems where food or free crops are deliberately planted in this manner. This dispersion is also common where competition between individuals is severe.

I shaped growth curves; characteristics patterns of increase and these are called population growth forms.

With the S-shaped growth form, the population runs out of some resource e.g. food, space on it could be due to fire, frost or diapauses

In sigmoid form the population increases slowly at first (this is the establishment or phase) then population density increases more rapidly or exponentially. It soon shows down gradually as environmental resistances increases until a more or less equilibrium level is reached and maintained.

NB; this is upper level beyond of no major increase can occur is represented by a constant kard it is known as the asymptote of the sigmoid curve i.e 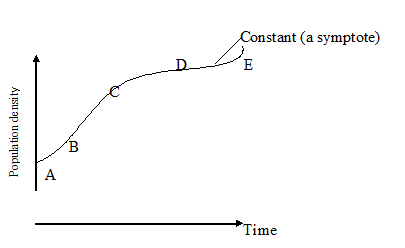 At this point organisms in a population are establishing themselves. The individuals could be in the pre-reproductive stages, increase in widely dispersed (though mature) B-C (expenetial phase)

Population increase is very rapid. Environmental conditions are optimal and therefore favour population growth. Individuals are in the reproductive stages i.e. have matured and have established themselves properly on the substrate, i.e. a bigger portion of the fundamental riches is put to use. Birth rate exceeds death rate. The organisms are acdamatised.

At this point, the curve flattens out due to environmental resistance. The environment becomes saturated with this particular species and its full carrying capacity is reached, and it cannot support any more organisms.

Therefore environmental resistance refers to these factors that limit population growth e.g. shortage of food or H20, 02 competitions for these resources intensifies with an increase population.

Physical factors when the population increase at a certain point, there is reluctance for the number of the population to breed. Overcrowding is usually affected by territoriality. With this type of behaviour, individual acquire and defend their own territory. This ensures that resources are available for its offspring which boasts its chances of survival.

Therefore such factors are density conditioned.

Is the maintenance of constant internal body environment. Internal environment = intercellular/tissue fluid + cellular environment. The term may be used fluid for any system, biological or non biological at steady state.

Examples of factors to be kept constant.

For homeostasis to occur, a control system/mechanism is required.

Is the science of control systems ie self-regulating systems which operate by means of feedback mechanisms.

Basic components of a control system

Is the set level or optimal level of the parameter (controlled variable) at which the system operates.

Signals the extent of any deviation from the reference point/norm.

Coordinates the information from various detectors and sends out instructions which will correct the deviation e.g. CNS.

Brings about the necessary change needed o return the system to the reference point/norm.

informs the detector of any change in the system as a result of action by the effector.

The cyoernetic systems that detect and relay back information to a production source, about the level of parameter, so that the system through its effectors adjusts its output accordingly.

A feedback is therefore a circular process which begins with a stimulus and ends with a response the cancels that cancels or intensifies the stimulus.

Components of a feedback mechanism

Here a deviation from the norm or set point triggers corrective mechanisms that restore the norm.

In biological system, homeostasis is usually achieved by a negative feedback process. 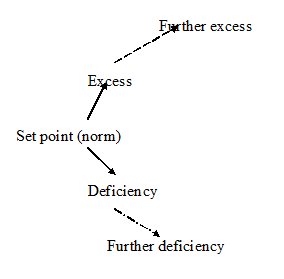 When the negative feedback mechanisms in mammalian temperature regulation  breakdown, a rise in environmental temperature may lead to an increase in body temperature which may spiral upwards and may be lethal.

EXAMPLES OF HOMEOSTATIC OR NEGATIVE FEEDBACK MECHANISMS IN DETAILS

Control of thyroxin production as a simple example of a biological control system:-