This unit is based on how sensory organs work 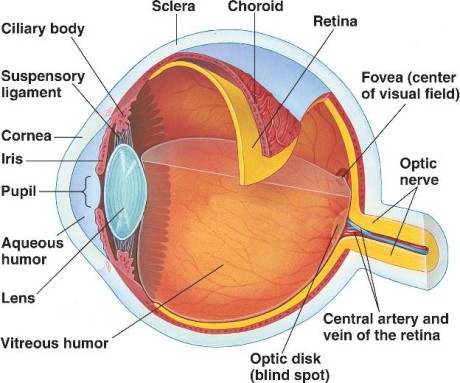 FUNCTIONS OF THE PARTS 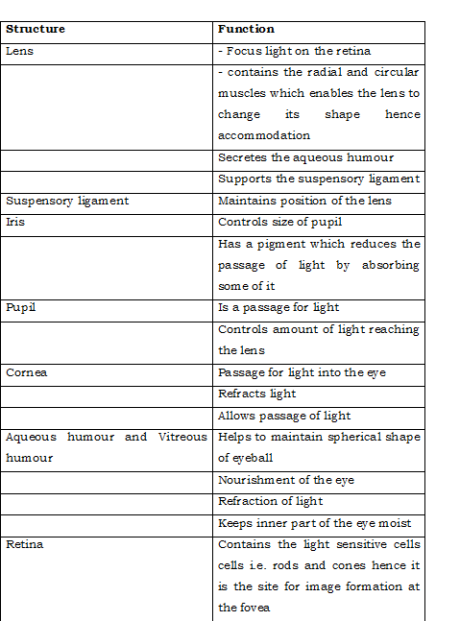 This is the ability of the lens to change its shape so as to adjust its focal length to focus objects at different distances.The lens is attached to the ciliary muscle at either end via the suspensory  ligament. The ciliary muscle has the circular and radial muscles.

During vision of a distant object, light rays enter the eye at a smaller angle, the circular ciliary muscles relax, radial ciliary muscles contract. Ionsion in suspensory ligaments is increased because of the outward press the humours on  and the lens becomes thin. Light is focused on the retina by a small refraction.

For a near object, light rays enter the eye of a larger angle, the circular ciliary muscles contract, the radial ciliary muscles relax, tension in the suspensory ligaments is released and the lens becomes thick. Light is focused on the retina by a bigger refraction.

Structure of the retina

The retina consists a number of cells i.e.;

red cells are distributed evenly through out the retina while the cones are concentrated in and around the fovea.

These are neurons that receive information from the photoreceptors and transmit it to the ganglion cells. Many rods share a single bipolar neurone while each cone has its own bipolar neurone.

These are move complex connections than bipolar cells and transmit information to the optic nerve fibres.

The connector (integrating) and a macrine cells which form lateral connections in the retina and helps to co-ordinate the activity of the bipolar and ganglion cells.

These are the rods and cones and are found furthest from the surface of the retina.

Structurally, they have similar parts i.e.

An axon which synapses with a bipolar neuron

Structure of the photoreceptor cells 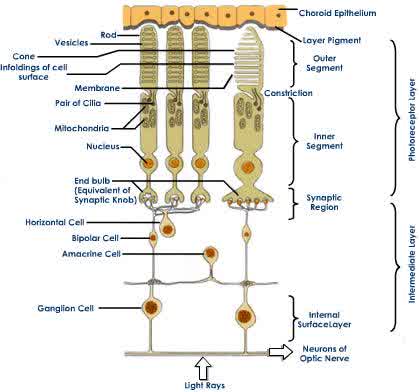 Structural and functional differences between rods and conos 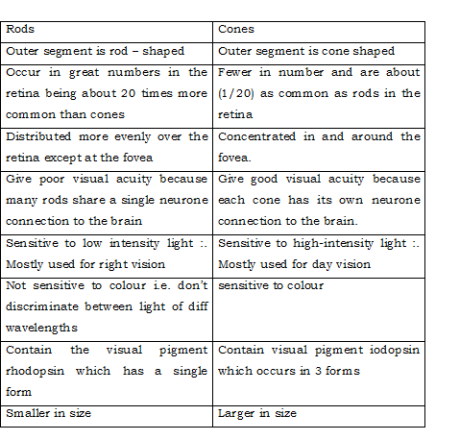 Rods are sensitive to differences in light intensity. They are involved in vision at low light intensity. In the rods, the photosensitive pigment is rhodopsin (visual purple). It is made of a protein opsin and a non protein compound retinal which is a derivative of vitamin A.

When exposed to light, rhodopsin splits into opsin and retinal. This is because on absorbing light, the retinal molecule changes its shape about the double bond from the cir-isomer form to the trans-isomer form in which form it can’t combine with the opsin molecule. This is called bleaching.

Opsin then opens up on ion channel in the membrane causing a generator potential to arise. As a result, an action potential is generated in the ganglion cell and is propagated to the brain along the optic nerve. The pattern of nerve impulses conveys infromaiton to the brain about the changing visual field.

Rhodopsin then re-forms in the absence of further light stimulation.  The process is catalysed by an enzyme retinal isomorase and it requires energy which is provided by the mitochondria. The process is called dark adpation

The rods are more sensitive than the cones because;

This is similar to that of rods except that a diff pigment iodopsin is present. This pigment is less sensitive to light :. Requires a great amount of light to be bleached.

Cones shows no retinal convergence since each cone has separate connection with a single optic nerve. Cones :. Precision of image soon and visual acuity.

Cones are the photosensitive cells of the retina which are responsible for colour vision.

The pigment iodopsin exists in 3 forms each sensitive to one of the 10 colours of light i.e. red, green and blue. Iodopsin that responds to blue light, red light and green light are found in the blue cones, red cones and green cones respectively each form of iodopsin in maintained in a diff cone and relative stimulation of each type of cone is interpreted by the brain as a particular colour. This is known as the degree of stimulation of each type of cone as a result of light reflected from the object. Equal stimulation of all the 3 types of cones results in perception of white colour. Stimulation of red and green            yellow colour.

Once impulses have been generated by the bipolar cells, they are passed over to the ganglion cells that transmit impulses via the optic nerve to the brain.

Control of the amount of light entering the eye

This is done by the iris which is a pigmented disk with circular radial muscles that determine the size of the pupil. Receptor cells in the retina must receive the threshold value of light stimulus. When the light is too low, there will be no stimulation. When light entering the eye is too much, the receptor cells may be destroyed  :. Size of pupil is varied by the radial and circular muscles depending on light intensity 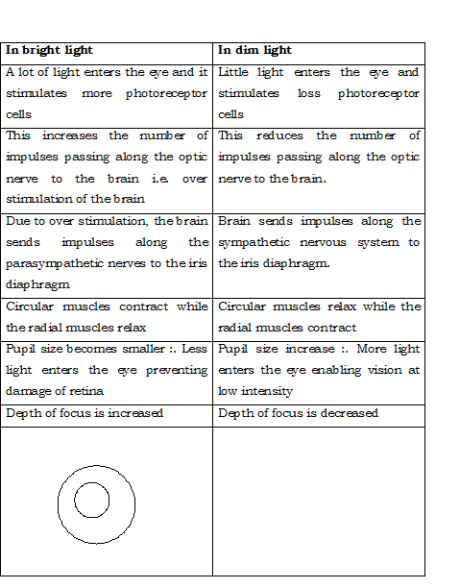 The muscles are controlled by the autonomic nervous system thus the actions they bring about are reflexes. The hormones adrenaline can also bring about muscular movements of the resulting into widening of the pupils.

Ability of the eye to perceive to very close objects as being distinct and separate.

CPD eye is one made of rumerous facets/ommatidia each complete with a lena retinal cells surrounded by pigment cells.

Comparison between the structure of the mammalian eye and compound eye 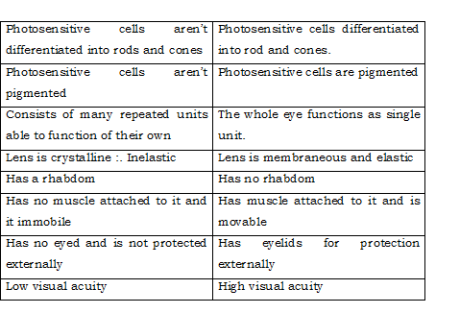 In both, there is overlap of images 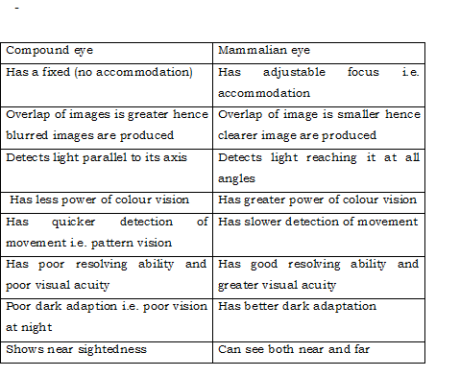 Generalized structure of a compound eye 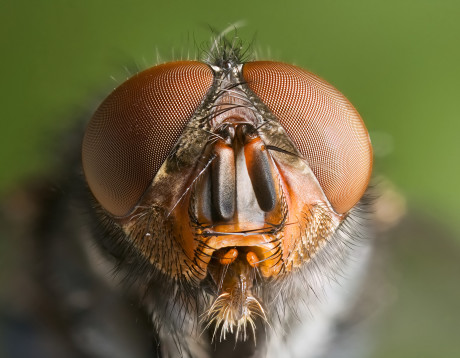 Structure of a single ommatidium 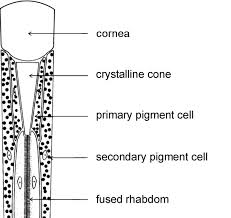 Each ommatidia warks as if they are separate units hence the ommatidium is the functional and structural unit of a compound eye.

Abnormal refraction in the eyeball

Occurs if lens curvature is too great (thick lens) or if the eyeball is elongated. The image of a distant object is focused in front of the retina. This is corrected by use of a concave lens.

Occurs is lens curvature is not enough (thin lens) or eyeball is too short. The image of a close object is focused behind the retina. Correction of hypermatropia is by a convex lens 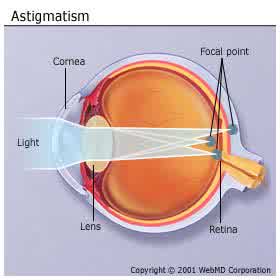 This is caused by an irregular cornea or lens. The result is that vertical lines and horizontal lines can’t both be brought to focus on the retina. Astigmatism can be corrected by a lens with radius of curvature greater in one plane than the other. 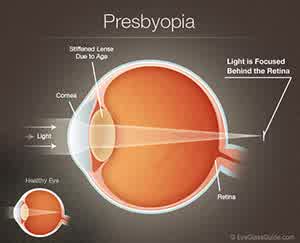 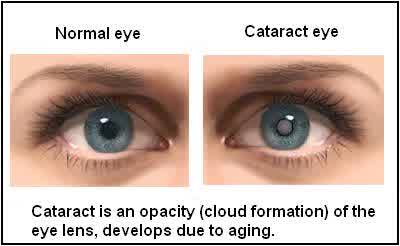 Role of the brain in vision

THE VIDEO SHOWING THE SENSORY ORGANS