This unit describes how reproduction is carried out in flowering plants

Formation of the male gametes in the anthers


In the anther, the cells undergo mitosis to produce the microspore mother cells. The microspore mother cell undergoes two meiotic divisions to produce four pollen grains. The pollen grain on germination undergoes a mitotic division to produce the pollen tune nucleus which is also known as the vegetative nucleus. This one is concerned with the growth of the pollen tube down the style. The other nucleus produced from this meiosis is known as the generative nucleus. This one later divides by mitosis to produce to male nuclei. Therefore in plants, its mitosis which finally leads to gamete formation.

One of the male nuclei fuses with the polar nuclei to form the endosperm nucleus while the other fuses with the functional egg cells to form a diploid and this is known as double fertilization and its unique in flowering plants.

Germination of pollen grain and growth of pollen tube. 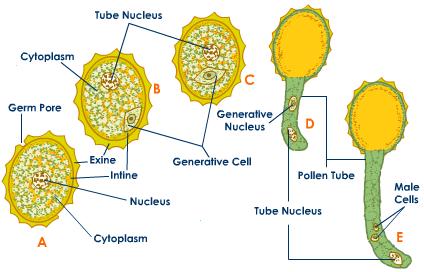 The megaspore mother cell undergoes to meiotic division to give rise to 4 haploid cells 3 of which degenerate.

The megaspore (haploid cell) undergoes 3 successive mitotic divisions to produce 8 nuclei, 4 at each end of the developing embryo sac, 2 nuclei migrate to the centre and are called the polar nuclei. 3 nuclei remain at each end of the embryo sac and each acquires a cell wall around itself.

At the micropyle end, there is the functional egg cell and the synergids which eventually degenerate.

At the chalaza end, there are the antigodal cells and these have no known function. If fertilization occurs, one male gamete fuses with the 2 polar nuclei to form a triploid nucleus which later forms the endosperm. The other male nucleus fuses with the functional egg cell to form a diploid zygote and this is known as double fertilization.

Development of the pollen tube

When the pollen grain falls on a receptive stigma, it absorbs food substances from the stigma tissue and increase in size then grow into a tube which grows down the style. The main food substance is sucrose. Growth is stimulated by auxins produced by the gynaecium and the pollen tube is directed towards the ovary by certain chemicals. An example of chemotropism. The pollen tube is also negatively aerotropic i.e. it grows away from the air.

Process of fertilization in higher plants

When the pollen grain germinates, the pollen tube grows down to the embryo sac taking the male gametes along. The tube nucleus divides mitotically into 2 male nuclei. The pollen tube enters the ovary via the micropyle and bursts on reaching the embryo sac. The tube nucleus disintegrates then one of the male nuclei fuses with the egg cell to form the zygote and the other fuses with the polar nuclei to form the endosperm nuclei which is triploid and this is known as double fertilization.

After fertilization, the zygote divides mitotically and develop into an embryo. The triploid 10 endosperm nucleus divides mitotically to give rise to the endosperm. The embryo expands and the nucleus becomes crushed out of existence. The ovule develops into the seed and the integuments become the seed coat. The outer integument becomes the testa while the inner one becomes the tegmen. The ovary develops into a fruit and the walls of the fruit are derived from the ovary wall.