This unit dwells on how species are generalised and genetically specified

Polymorphism is the existence within a particular species 2 or more distinct types of individuals. (Workers, droves and queen bees and termites). 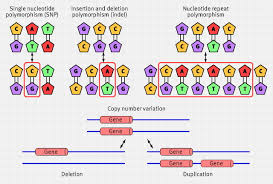 In some cases, the different types may result from different of environment, but in genetic polymorphism, the different forms, the morphs have a genetic basis and their characteristics are transmitted in a mendelian manner. Generally, the different morphs are controlled by a series of alternative alleles, any one of which may occur at a particular locus on the chromosome, thereby giving a variety of different genotypes.

The genes responsible for the various morphs all belong to one allelic set. There are 2 types i.e.

A genetically controlled morph is in the process of spreading through the population so its numbers compared with other morphs will be changing. Eventually, it may become uniform e.g. the peppered meth.

The alleles responsible for them occur in fairly constant proportions within a given population whose members freely inbreed. All of them to a greater or lesser extent selected for or against by natural selection.

Stable polymorphism is achieved by a balance of relative advantages and disadvantages. Each morph being favoured by natural selection in the particular conditions that occur within a varied environment e.g. the land snail. Sickle cell conditions in human and human blood gps.

Often in polymorphism, the various posses different thought to be associated in other more important different such as viability, reproductive efficiency on which natural selection can operate e.g. at 1st sight, there would be no ment of having a particular blood gp but according to evidence, people belonging to blood gp A and AB are more susceptible to small pox than other gps. Blood gp A is said to be associated of the stomach and gpO with duodenal ulcers.

Portuguese man of war exhibits another type of polymorphism in that they are colonial animals, the colony being composed of several different types of interdependent individual each with its particular job e.g. feeding, defence or reproduction. Also in social insects e.g. bees and ants in which there are distinct castes within the community.

Effective long-term evolutionary change population depends on the action of the force of natural selection not merely on individual genes, but on population. A more or less genetically isolated unit of population is termed as a e.g. the on the xaubab plateau in Angola, the carp in a pord, beach trees in a copse or paramecium in a ditch. Though there may be considerable movement of individuals to and from, an individual dome a dome perpetuates itself by interbreeding of the individuals within it thus representing a genetic unit and what happens to it in evolutionary terms depends on the genes it contains. Its genetic constitution i.e. the sum of all different genes in a population is called a gene pool. Just as the future of an individual organism depends on its genetic constitution, so the evolutionary future of a dome depends on its gene pool.

Gene frequency is that of any allele in a population relative to others at the same disruptive influences like mutation or selection. The frequency of alleles in a population remains constant generation after generation. This is the Hardly-Weinberg principle. There will be a continual movement of genes flow within the population as a result of breeding but the overall gene frequency remains constant. This stability is called genetic equilibrium. Under these circumstances a dome remains unchanged in its overall characteristics and no evolution occurs. Evolution only takes place and when the genetic equilibrium is upset resulting from mutation, environmental changes and natural selection. An environmental change alters the selection pressure faviouring a particular allele where frequency increases accordingly. This is the genetic basis of progressive selection.

Two other factors can upset the genetic equilibrium.

An allele may e lost altogether from a population as a result of pure change e.g. in small population, it may happen that none of the individual carrying a particular allele reproduces successfully resulting in the total loss of that particular a small population, a sufficient proportion may be lost to bring about a significant drop in the gene frequency. Such variations in gene frequency are known as genetic drift. The changes of this happening become smaller, the large the population thus genetic drift can only be expected to produce significant changes in a small population. Loss of one or more alleles from a population.

2nd factor depends on the fact that neighbouring population may not necessarily be totally isolated from each other. Generally, a population is sufficiently else to an adjacent one to individuals to move from one to another or for interbreeding to take place at the boundary. A population may gain of lose alleles hence genetic composition is altered. Sometimes adjacent population actually join and it interbreeding takes place, they merge into a single genepool.

Application of the Hardy-Weinberg principle

To determine the frequency of a given genotype in a population, the Hardy-Weinberg formula is used.

Suppose alleles A and O are present in a population, with the frequency of P and Q.

Individuals in the population will be either homozygous for the dominant allele (AA), homozygous recessive (aa) or heterozygous (Aa).

Frequencies of negatives different genotypes in the population in any generation will be determined by the way gametes fuse. Assuming the population is infinitely large and there are no migration and provided mating is random that all individuals produce approximatel equal numbers of gametes and that allele A and a don’t mutate, the gamtes will be expected to fuse as in the following. 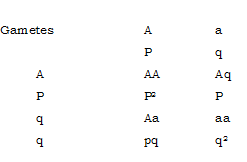 To illustrate how the formula can be used, consider tongue rolling in humans i.e. ability a roll the tongue longitudinally into a u-shape, it caused by a dominant allele. Suppose that in a certain population, 84% of the people can roll their tongues and 16% can’t. Using the Hardy-Weinberg formula, the number of people heterozygous or homozygous for tongue rolling can be determined.

Now their frequencies in the next generation;

Where p2 is the frequency of RR individuals, 2pq for Rr and q2 for rr individuals.

The frequencies of the genetypes in the next generation will be determined by the way the gametes fuse. Assuming that mating is random, that all individuals produce equal numbers of gametes and the allele A and a don’t mulate, the gametes will be expected to fuse as shown below.

Therefore frequencies are expected in the next generation.

The genotype frequency will be the same as in the previous generation. The genotype frequencies will be expected to change only if the population is small, if a large number of individuals fait to produce roughly equal numbers of gametes. If mating isn’t random or if some of the genes are lost from the population, but from the evolutionary point of vice, the most important changes in genotype frequencies are those that occur if the genes mulate or if the environment changes in such a way as to favour a particular genotype. 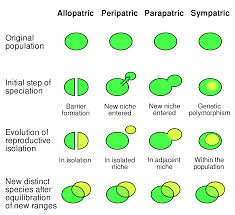 Process by which species are formed. Normally, the variants of a species are described as sub-species. If and when it can be shown that such sub species can’t interbreed, they can be assumed to have acquired the status of new species.

The kind of isolating mechanisms that can lead to emergency of new species are:-

Includes all environmental barriers keeping populations apart. Thus the population may be widely separated geographically or divided by impenatratable barriers e.g. mtn ranges and rivers. Even if they occupy the same locality, they ay be separated by having a preference for slightly different habitats. Again, migratory population may be effectively isolated from each other by the fact that they occupy the same habitats during different seasons of the year.

Though to populations may not ecologically separated, they may be effectively isolated by the fact that they can’t interbreed. This might be caused by lack of attraction between males and females or by physical non-correspondence of gentalia. With plants, pollination may be impossible between the 2 populations. In animals with elaborate behaviour patterns, it may be because the courtship behaviour of one fails to stimulate the other. This and other forms of behavioural incompatibility are sometimes referred to a behaviroural isolation.

Even though mating may be possible, fundamental different in genetic construction may prevent reproduction being successful. Thus the gametes may be presented from fusing e.g. by the pollen grain of one population of plants failing to germinate on the stigma of the other. Even if fertilization doesn’t occur, the zygote may be inferior in some ways and fail to develop properly. Sometimes offsprings are produced but the hybrids may be adaptively inferior, living for only a short time or they may be sterile as on the famous case of the male form by interbreeding between donkeys and horses

1st step in the development of new species should be splitting up of the isolation into 2 to more separate demes each with its own genepool. These domes must be isolated from one another because if genes are exchanged differences which might arise between them may not be perpetuated. If they are isolated, mutation and selection can take place independently in the 2 populations and each can develop into a distinct species.

Frequently, isolation is geographically isolated populations are termed allopatric, literally meaning different countries. It provides the opportunity for each population to evolve along its own lines. If the to populations subsequently come together, each may have changed to such an extent that for physiological or genetic reasons, interbreeding is impossible. The 2 population may merge geographically forming a sympatric population but as they are now reproductively or genetically isolated, they retain their individuality. They have infact become separate species.