It is a special kind of synapse where the terminal dendrites of a motor neurone make contact with a muscle fibre. At the nerve junction the membrane of the muscle fibre is modified to form an end plate to which the dendrite is attached. The muscle cell membrane which forms the post-synaptic membrane is highly folded in order to increase the S.A for max depolarization. The internal structure is very similar to that of the synaptic knob so the transmission of impulses occurs in the same way as to when an impulse arrives at a nerve to nerve junction.

Action of drugs and poisons

They exist in 3 categories

These include Atrapine and curare. These chemicals destroy acetylcholine and therefore inhibit its formation or stop its action. As a result, the membranes don’t become depolarized and this causes a synaptic block.

These destroy or prevent the formation or action of cholrinesterase. This enhances the effects of acetylcholine thus transmission across the synapse. If it isn’t produced, the person suffers from convulsive contractions of all the muscles upon the slightest stimulation.

Drugs that inhibit action of heradenaline

Action of neradenaline can be inhibited or enhanced by drugs. When neraderatine is affected, there is reduction in the threshed value for the excitation of the post synaptic membrane resulting into ineffective response by the neurone.

Caffeine raises the cells’ metabolism and leads to release of more neuro transmission :. The effectors becomes over stimulated.

Cocaine causes neradrenaline to linger at the synapse and leads to over stimulation of the effectors.

Drugs like heroine bind the receptor molecules and black sensations of pain.

Once most of the transmitters have had their effects, they have to be destroyed by enzymes. This is very important because unless the transmitter is removed from the synaptic cleft, subsequent impulses would have no effect as the receptors on the post synaptic membrane would be bounced.

Co-ordination and control of neurons

The most straight forward situation occurs when the arrival of a single impulse at only one synaptic knob triggers an action potential in the post synaptic fibre.

This occurs when 2 or more single knobs that can’t produce enough transmitter substance if each stimulated alone are stimulated simultaneously and release the transmitter sub at the same time on the same synaptic membrane, effects produced by each knob summated to exist the post synaptic fibre.

In this type of transmission, one action potential arrives and though it does not release sufficient transmitter substance to set up another up in the post synaptic fibre, it make it easier for the next impulse which arrives to do so,.

The list impulse does not trigger off a response but make it easier for the 2nd one to do so.

Accommodation or fatigue of an impulse

If a nerve is repeatedly stimulated, it eventually loses the ability to respond. This is because the transmitter substance gets exhausted and its re-synthesis can’t keep pace with the rate at which the impulse reach the synapse. It is said to be accommodated or fatigued.

A short rest restores the response as more transmitter molecules are made. However, some synapses never fatigue because they have an extremely rapid rate of re-synthesis.

The role of synapses in the nervous system

Some synaptic knob inhibits the nerve cells with they are in contact such that arrival of an impulse at such a synapse makes  the synaptic nerve cell more negative than usual such that generation of an EPSP is difficult.

This is the posterior cylindrical extension of the brain. It runs through the neural canal of the vertebral column. It is protected by the vertebral column and it has 31 pains of spinal nerves which transport impulses to and from it. The spinal nerves divide close to the spinal cord into 2 branches called the dorsal route and the ventral route. There is an H-shaped core called the grog matter which contains cell bodies, dendrites and synapses surrounding the grog matter is an outer layer called the white matter which contains nerve fibres with their myelein shoath responsible for the colour. Sensory neurons enter the spinal cord via the dorsal route where their cell bodies form a swelling called a dorsal route ganglion. They form a synapse with the relay neurone in the dorsal horn. Motor neurons leave the spinal cord via the ventral route after making a synapse with the relay neurone in the ventral horn. There exists groups of nerve fibres which form trucks running through the white matter. They consist of ascending trucks convey sensory information to the brain while the descending trucks convey motor information from the brain to the spinal cord.

The main functions of the spinal cord are;

This is a rapid automatic response to stimulus i.e without conscious thought. It is involuntary and is not initiated by the brains e.g. knee jerk, blinking, sneezing, withdrawal reflex i.e. the hand is spontaneously removed from the needle then the message is sent to brain and the pain is felt later, contraction of the tentacles of the sea anemone when touched, salivation 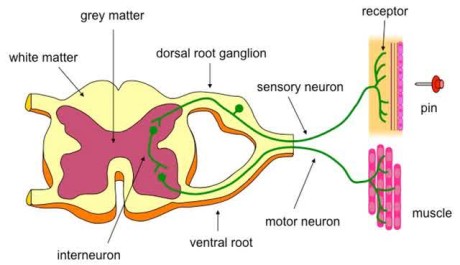 This is the path taken by an impulse in a reflex action. Reflexes can be divided into conditioned and unconditional reflexes.

Conditioned reflexes are based on learning and the incoming information is compared with the stored information about the nature and cause of the present stimulus.

Pavlor proved that dogs could learn a reflex by ringing a bell every time he gave them food. Eventually, the dogs would be start salivating when the bell was rang even if there was no food. 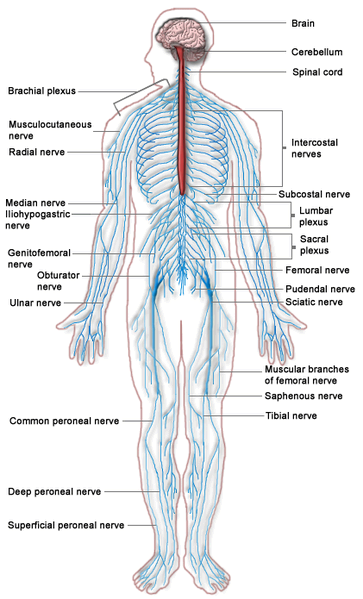 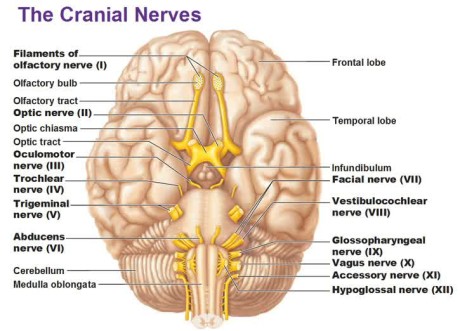 They arise from the ventral side of the brain and they are associated mainly with receptors and effectors in the head region. They show a more regular pattern due to the following reasons.

In primitive vertebrates, there 10 cranial nerves while nerves have 12. some of these contain only sensory fibres, others contain only A mixed nerve is one which contains both sensory and motor neurons e.g. the vagus nerve which goes to the internal organs.

These are associated mainly with receptors and effectors in parts of the body their than the head. They show a regular pattern where there’s a series of one pair in each body segment. Each is connected to the spinal cord by a dorsal and ventral route.

The spinal nerves are referred to as mixed nerves. The peripheral nervous system is divided into 2 parts.

This is the voluntary part which contains spinal and cranial nerves that are responsible for containing voluntary activities.

This is not controlled by oil. It controls involuntary activities e.g. heart beat, sweating, peristalsis and it carries impulses from the CNS to the effectors. It is mainly concerned with maintenance of a stable internal environment.

The ANS is divided into;

The 2 systems work antagonistically i.e the sympathetic nervous system speeds up various body processes while the  parasympathetic system shows down these activities. 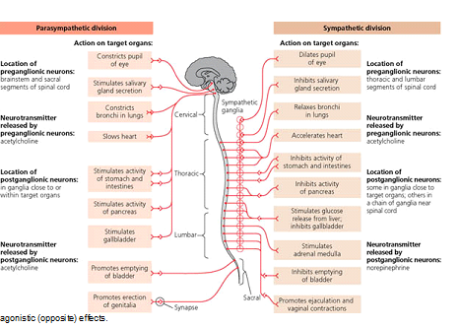 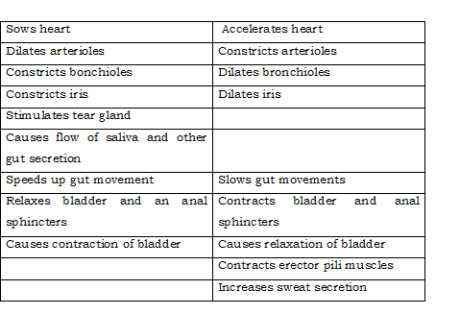 Via the sympathetic system, it constricts the blood vessels in the salivary glands thus limiting the activity and lessening flow of saliva. It shows down peristaltic movement of the gut delaying food in the alimentary canal hence improved absorption.

Via the parasympathetic system, it produces a chemical called acetylcholine which produces conditions of rest by slowing down the body activities.

It shows down the heat beat and lowers blood pressure.

Reduces blood flow to the skeletal muscles and heart

Generally, body activities are returned to normal after excitation by the sympathetic nervous system by the inhibitory function of the ANS.M

THE VIDEO SHOWS NEUROMUSCULAR JUNCTION PROCESS IN A SKELETAL MUSCLE