This unit dwells on genes mutate in the body

These are sudden or spontaneous changes which occur in the square of base in a gene or DNA strand.

Likely changes in genes during mutations.

These mutations usually occur when the DNA is replicating or can be induced by mutagens.

A sudden change in either chromosome structure or in number. Most chromosome mutations result from intertwining of chromosomes during meiosis during which they break and region after exchanging parts or even losing others. They are of 2 types.

Those due to structural change in chromosomes.

Those due to change in chromosome number 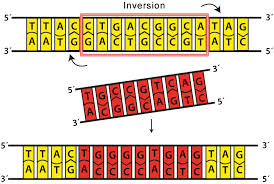 A section of the chromosome breaks up from the middle and rotates through 1800 and rejoins on the same chromosome. The sequence of genes in this section is therefore reversed.

A section of one chromosome break up and is exchanged with another on a different chromosome to which it is not homologous. 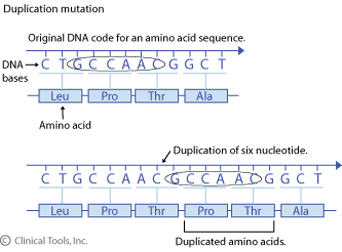 A section of the chromosomes replicates. The sequence of genes in this section is therefore repeated. 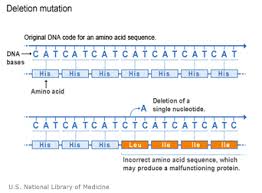 A section of the chromosome is dropped. All the genes in that section are lost. It results in lethal characters.

An error during cell division where there is loss or gain of a whole chromosome. The failure of one homologous pair of chromosomes to separate during anaphase 1 of meiosis give rise to some gametes which lack an entire chromosome and some which have two copies of the same chromosome.

Zygotes containing an extra chromosome may develop while those lacking are chromosome may fail to develop. Individuals who develop possess some abnormalities as shown below. 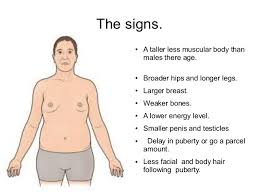 This is a condition where a cell has three or more times the haploid chromosome number. These arise when:-

A change in chromosome number by addition or subtraction of whole chromosomes to the diploid set. It occurs when individual chromosomes rather than whole sets fail to separate during anaphase 1 i.e. from non disjunctions.

A change in the whole sets of chromosomes such that chromosome number of the nucleus, cell or organism is an exact multiple of the hapleid number so that all chromosomes are present in the diploid triploid.

This is normal in some insects e.g. honey bees where males arise from unfertilized eggs and female fertilized eggs. Most monoploids tend not to survive unlexs they can reproduce vegetatively.

This is normal condition in most organisms.

Triploids tend to be interfile due to the fact that homologous chromosomes pairing is impossible and reproduce vegetatively e.g. bananas, apples etc

Tetraploids can reproduce amongst themselves because pairing of homologous chromosomes can occur.

Euploids can be referred to as autopolyploid if the genomes are alike having arisen from the same individual and are a result of somatic doubling of the chromosome number or allopolyploids if gametes are from different individuals.

Role of mutations in evolutions