ALBIO5: Human Impact On The Environment

This unit focuses on human action impact on the environment

One of the main reasons for studying ecology is to understand the impact humans are having on the planet. The huge increases in human population over the last few hundred years has been possible due to the development of intensive farming, including monoculture, selective breeding, huge farms, mechanisation and the use of chemical fertilisers and pesticides. However, it is apparent that this intensive farming is damaging the environment and is becoming increasingly difficult to sustain. Some farmers are now turning to environmentally-friendly organic farming. We’ll examine 5 of the main issues and their possible solutions.

Until the middle of the 20th century, farms were usually small and mixed (i.e. they grew a variety of crops and kept animals). About a third of the population worked on farms. The British countryside was described by one observer in 1943 as “an attractive patchwork with an infinite variety of small odd-shaped fields bounded by twisting hedges, narrow winding lanes and small woodlands”. Today the picture is quite different, with large uninterrupted areas of one colour due to specialisation in one crop – monoculture. Monoculture increases the productivity of farmland by growing only the best variety of crop; allowing more than one crop per year; simplifying sowing and harvesting of the crop; and reducing labour costs.

However, monoculture has a major impact on the environment:

Some farmers are now returning to traditional crop rotations, where different crops are grown in a field each year. This breaks the life cycles of pests (since their host is changing); improves soil texture (since different crops have different root structures and methods of cultivation); and can increase soil nitrogen (by planting nitrogen-fixing legumes). 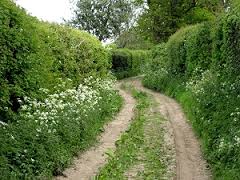 Hedges have been planted since Anglo-Saxon times to mark field boundaries and to contain livestock. As they have matured they have diversified to contain a large number of different plant and animal species, some found nowhere else in the UK. Since the Second World War much of the hedgerow has been removed because:

However it has now become clear that hedgerows served an important place in the ecology of Britain.

The importance of hedgerows is now being recognised, and farmers can now receive grants to plant hedgerows. However it takes hundreds of years for new hedgerows to mature and develop the same diversity as the old ones.

Since the rate of plant growth in usually limited by the availability of  mineral ions in the soil, then adding more of these ions as fertiliser is a simple way to improve yields, and this is a keystone of intensive farming. The most commonly used fertilisers are the soluble inorganic fertilisers containing nitrate, phosphate and potassium ions (NPK). Inorganic fertilisers are very effective but also have undesirable effects on the environment. Since nitrate and ammonium ions are very soluble, they do not remain in the soil for long and are quickly leached out, ending up in local rivers and lakes and causing eutrophication. They are also expensive.

An alternative solution, which does less harm to the environment, is the use of organic fertilisers, such as animal manure (farmyard manure or FYM), composted vegetable matter, crop residues, and sewage sludge. These contain the main elements found in inorganic fertilisers (NPK), but in organic compounds such as urea, cellulose, lipids and organic acids. Of course plants cannot make use of these organic materials in the soil: their roots can only take up inorganic mineral ions such as nitrate, phosphate and potassium. But the organic compounds can be digested by soil organisms such as animals, fungi and bacteria, who then release inorganic ions that the plants can use (refer to the nitrogen cycle). Some advantages of organic fertilisers are:

Some disadvantages are that they are bulky and less concentrated in minerals than inorganic fertilisers, so more needs to be spread on a filed to have a similar effect. They may contain unwanted substances such as weed seeds, fungal spores, heavy metals. They are also very smelly!

To farmers, a pest is any organism (animal, plant or microbe) that damages their crops. Some form of pest control has always been needed, whether it is chemical (e.g. pesticides), biological (e.g. predators) or cultural (e.g. weeding or a scarecrow). Chemicals pesticide include:

Pesticides have to be effective against the pest, but have no effect on the crop. They may kill the pests, or just reduce their population by slowing growth or preventing reproduction. Intensive farming depends completely on the use of pesticides, and some wheat crops are treated with 18 different chemicals to combat a variety of weeds, fungi and insects. In addition, by controlling pests that carry human disease, they have saved millions of human lives. However, with their widespread use and success there are problems, the mains ones being persistence and bioaccumulation.

Both of these are illustrated by DDT (DichloroDiphenylTrichloroethane), an insecticide used against the malaria mosquito in the 1950s and 60s very successfully, eradicating malaria from southern Europe. However the population of certain birds fell dramatically while it was being used, and high concentrations of DDT were found in their bodies, affecting calcium metabolism and causing their egg shells to be too thin and fragile. DDT was banned in developed countries in 1970, and the bird populations have fully recovered. Alternative pesticides are now used instead, but they are not as effective, and continued use of DDT may have eradicated malaria in many more places.

Persistence. This refers to how long a pesticide remains active in the environment. Some chemicals are broken down by decomposers in the soil (they’re biodegradable) and so are not persistent, while others cannot be broken down by microbes (they’re non biodegradable) and so continue to act for many years, and are classed as persistent pesticides. The early pesticides (such DTT) were persistent and did a great deal of damage to the environment, and these have now largely been replaced with biodegradable  insecticides such as carbamates and pyrethroids. 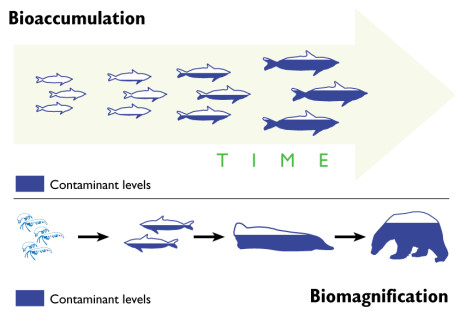 The high concentration of DDT in birds explains why the toxic effects of DDT were first noticed in birds. 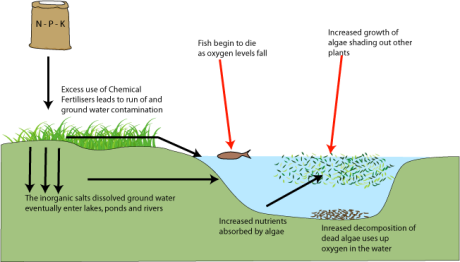 Eutrophication refers to the effects of nutrients on aquatic ecosystems. These naturally progress from being oligotrophic (clean water with few nutrients and algae) to eutrophic (murky water with many nutrients and plants) and sometimes to hypertrophic (a swamp with a mass of plants and detritus). This is in fact a common example of succession. In the context of pollution “eutrophication” has come to mean a sudden and dramatic increase in nutrients due to human activity, which disturbs and eventually destroys the food chain. The main causes are fertilisers leaching off farm fields into the surrounding water course, and sewage (liquid waste from houses and factories). These both contain dissolved minerals, such as nitrates and phosphates, which enrich the water. 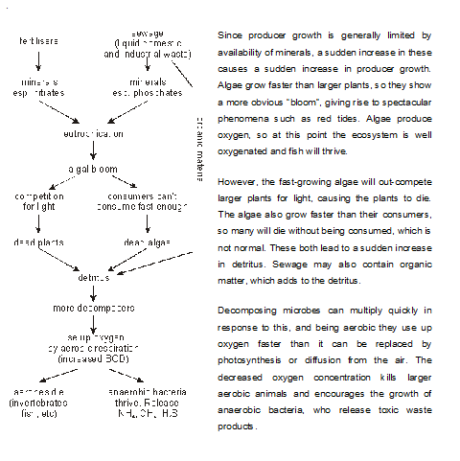 (BOD). This measures the rate of oxygen consumption by a sample of water, and therefore gives a good indication of eutrophication. A high BOD means lots of organic material and aerobic microbes, i.e. eutrophication. The method is simple: a sample of water is taken and its O2 concentration is measured using an oxygen meter. The sample is then left in the dark for 5 days at 20°C, and the O2 is measured again. The BOD is then calculated from: original O2 concentration – final O2 concentration. The more oxygen used up over the 5 days (in mg.dm-3) the higher the BOD, and the higher the BOD the more polluted the water is. This table shows some typical BOD values. 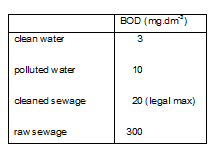 Aquatic ecosystems can slowly recover from a high BOD as oxygen dissolves from the air, but long-term solutions depend on reducing the amount of minerals leaching into the water. This can be achieved by applying inorganic fertilisers more carefully, by using organic fertilisers, by using low-phosphate detergents, and by removing soluble minerals by precipitation in modern sewage plants. As a last resort eutrophic lakes can be dredged to remove mineral-rich sediment, but this is expensive and it takes a long time for the ecosystem to recover. This has been done in the Norfolk Broads. 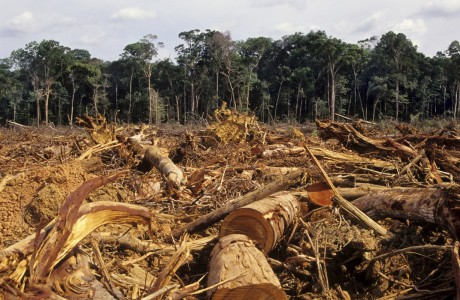 Human activities often affect whole ecosystems.  There are potential conflicts between the need/wish to produce things useful to humans in the short term and the conservation of ecosystems in the long term.

Forests are the natural climax communities.  They have high diversity, with complex food webs.  Humans have been clearing areas of forest for thousands of years – leading to deforestation over large areas of Europe, Asia and North America.  Recent and present deforestation affects manly tropical rain forests.   Tropical rain forests have been estimated to contain 50% of the world’s standing timber.  They represent a huge store of carbon and sink for carbon dioxide and their destruction may increase atmospheric concentrations of carbon dioxide by 50%.  They are important in conserving soil nutrients and preventing large-scale erosion in regions of high rainfall.  They contain a large gene pool of plant resources.

Deforestation leads to the increase in land for agriculture

Conservation involves managing the Earth’s resources so as to restore and maintain a balance between the requirements of humans and those of other species.  Many attempts are being made to encourage sustainable use of forests.  This involves measuring and comparing yields and profits from deforestation with alternative uses.

A study in 1989 (obviously the figures will be much different now) of an Amazon rainforest in Peru showed that each hectare of the forest produces fruit and latex (rubber) with an annual market value of $700.  If, however, the trees are cut down, the total value of their wood is $1000.  Now, trees can only be felled once, but fruit and latex can be harvest every year.  This study into sustainable management can allow governments to be persuaded that more money can be made from rainforests by exploiting them on a sustainable basis than by destroying them, therefore it may be worth their while to preserve them.