This is the study of the mechanism of heredity or inheritance whereby traits or characteristics are passed on from generation to generation.

Some traits of importance in genetic.

In big production, the farmer has to look at pigs 4 pork and the one for beacon and the dual purposes ones.

In cattle production, dairy, beef and dual purpose ones.

Poultry production, there are the layers and broilers

The father of genetic is Gregor Mandel. He is known for his breeding experiments. He used the gander ped (pisum satisum). He studied 7 characterisitcs of this pea and each characteristics had 2 traits namely;

Using these breeding experiments, mandel observed the inheritance of parents characterisitics through 2 generations of offsprings.

All the F2 offsprings had a ratio of tallness; shortness being 3:1

Mendel proposed 2 laws to explain the behaviour of genes the he called factors at that time.

This is the law of segregation. It states that factors are present in pairs in somatic cells. When an organism forms gametes, the factors separate so that each gamete contains only one factor of a pair. It is now known that genes are arranged on chromosomes which are present in homologous pairs in the somatic diploid cells and when the haploid gametes are formed, homologous chromosomes are separated by meiosis so that each gamete contains one chromosome of each pair. Genes present in pairs in somatic cells are present singly in gametes. The pair of genes has alleles they are genes which occupy the same position in homologous chromosomes. The position is known as locus.

This is the law of independent assortment. This states that when more than one pair of factors are considered. Each factor of a pair combines with any other factor of another pair as long as the genes aren’t linked i.e. on the same chromosome. This law leads to dihybrid inheritance which is the study of inheritance of 2 pairs of genes.

t represent the allele for shortnes (cressessive) in a pea plant.

3:1 is the typical unit of inheritance for a given trait.

This is the basic unit of inheritance for a given trait.

This is a pair of genes which occupy the same locus on homologous chromosomes and determine a particular characteristic e.g. T and T are alleles.

This is a diploid condition where both alleles are indential e.g. TT and tt.

This is the physical or chemical expression of a characteristic e.g. tallness.

This is genetic expression of a characteristic in terms or alleles.

Let R represent the allele for roundness in seeds (dominant).

Let r represent the allele for wrinkledness in seeds (recessive).

g be the allele for yellow pods.

Albinism is caused by a recessive gene.

The study of the inheritance of two pairs of contrasted characters.

Use a punnett square to obtain the F2 phenotypes and genotypes. 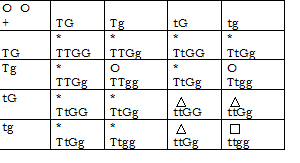 Phenotype ratio of F2 is: 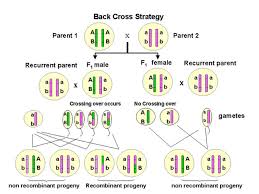 This is crossing of one of an organism with one its parents. 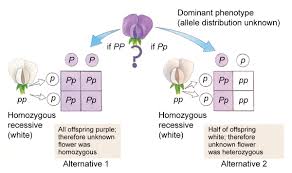 This is a situation in which both alleles are expressed equally in the phenotype of the heterozygote. E.g. alleles for blood group A and B, alleles for coat colour in cattle, letters used for codominance are different and are both capital.

This is the situation where the teterozygote exhibits a phenotypic intermediate between the pherotype of the two alleles g colour of flowers in snap dragon. The colours of the flowers are red and white and the heterozygotes are pink.

Let W be the allele for White flower.

Let R be the allele for Red flower. 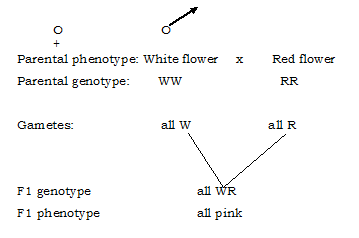 Crossing a homozygous drosophila with long wings with one with vestigial wings.

Let v be the allele for vestigial wings 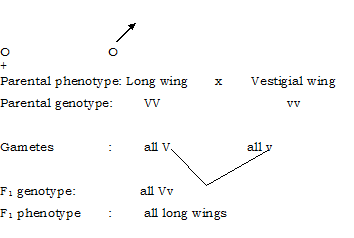 Crossing a white but with a black cow

Let B be allele for black coat. 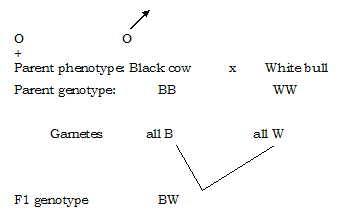 Many genes work by controlling chemical reactions by means of enzymes therefore, on a biochemical basis, a dominant allele is one which usually codes for a functional product such as an enzyme which even when present in only one copy i.e. in the heterozygous condition is capable of synthesizing enough product to produce a phenotype identical to that produced when there are 2 copies of the dominant allele in the cell.

In contrast, the recessive allele usually the synthesis of a non directional product and its phenotype can only be expressed when there is no dominant allele present.

A situation where both alleles at a locus produce functional products and it the 2 alleles code for different products then both products will appear in the heterozygote.

A situation where the alleles produce insufficient products.

It is a gentic disease of the humans and provides an example of codominance dominance, and incomplete. The alleles involved affect the hemoglobin.

If a normal person who is a heterozygote marries another heterozygote. What is the offspring genotype and phenotype.

It is possible to have 2 different breeding varieties of the sweet pea both of which have while flowers. This is because flower colour in sweet pea is controlled by two loci. If the 2 varieties are crossed, the F1 generation will all have purple flowers.

If F1 is selfed, F2 generation has phenotypes in the ratio a purple: 7 white.

Compound x and compound y are both colourless. Conversion of x into y is catalyzed by enzyme E2. The synthesis of functional enzymes E1 and E2 is directed by the alleles C and P respectively. Recessive alleles C and P code for the production of non-functional enzymes so, A plant with genotype CCpp would be white since it can’t produce function enzyme E2 and can’t convert y to the purple pigment 2. it can only manage to convert x to y.

A sweet pea with genotype ccPP would have white flowers since it can’t produce functional enzyme e, hence can’t produce y which is essential for the synthesis of the purple pigment.

Let C represent the allele for presence of a pigment (dominant)

Let c represent the allele for lack of a pigment (recessive) 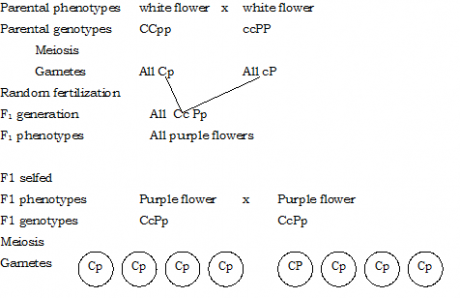 Use the punnett square to obtain the F2 genotypes and phenotypes 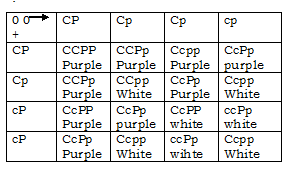 Epistatis is defined as the interaction between 2 different genes that aren’t alleles so that an allele of one of them interferes and inhibits the phenotypic expression of another gene. E.g. in the sweet pea, the gene for pigment formation is epistatic over the one for flower colour.

Coat colour in mice: wild mice have different coat colours. The wild mice can have agouti coat colour. They can also have black fur.

Let A represent the gene for agouti fur (dominant)

Let a represent the gene for black fur (recessive)

Let c represent the gene for lack of the pigment. 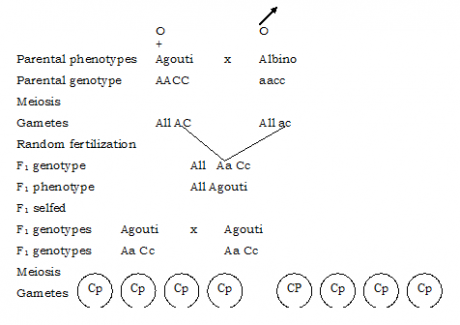 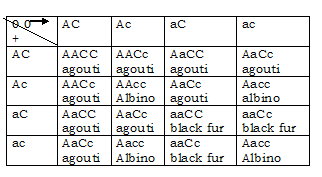 E.g. inheritance of fur colour in mice. The allele for yellow fur (Y) is dominant to the allele for grey fur (y). If a pair of yellow mice are mated the result is always the same, two thirds of the offsprings are yellow, 1/3 grey i.e. yellow to grey occur in a ratio 2:1. The fact that both offsprings include both types of fur colour means that both parents must be heterozygous (Yy). But genetic crossing give a ratio of 3:1 in F1. The simplest explanation to this is to postulate that individuals homozygous for the yellow allele (YY) dies before birth therefore the alleles YY represent a lethal combination of alleles. As shown below, the death of such individuals in the embryonic state would have the effect of removing a quarter of the offspring from the litter. The dead embryos would represent 1/3 of the potential yellow offsprings thus reducing the proportions of yellow offspring ¾ to 2/3.

This hypothesis is correct and is confirmed by two further observations.

This evidence shows that YY combination is lethal i.e. the U allele not only affects colour but also viability. It is both dominant and recessive i.e. as allele controlling fur colour, it is dominant and as allele affecting viability, it is recessive exerting lethal affects only when in homozygous state.

Lethal alleles are known to exist in a wide range of organisms including humans. The lethal allele can exert partial dominance in certain cases when it can be detected from the heterozygous condition. Though this is not lethal, it can have an observable effect on the individual’s phenotype.

This is when genes are situated on the same chromosome and all genes on the same chromosome form a linkage gp and usually pass into the same gamete and are inherited together. As a result of this genes belonging 2 the same linkage gp usually don’t show independent assortment so they fail to produce the expected 9:3:3:1 ratio in dihybird inheritance E.g. the genes for body colour and wing length in drosophila are linked. The genes for grey body and the gene for long wing are dominant over the gene for black body and vestigial wing.

If a pure breeding grey bodied long winged drosophila is crossed with a black bodied vestigial wing drophilla, the expected F2 phenotypic ratio would by 9:3:3:1. However, this result is not obtained instead, the F2 show an ~ 3:1 ratio of the parental phenotype because they are linked (genes) i.e. they are found on the same chromosome. This can be represented diagrammatically.

Let c represent the gene for lack of the pigment.

In practice though, this 1:3 ratio is never produced because total linkages is rare. So most breeding experiments involving linkage produced approximately equal numbers of the parental phenotypes and a significantly smaller number of phenotypes showing new combinations of characteristics also in equal numbers. These later phenotypes are described as recombinants.

Therefore recombinants are phenotypes produced after crossing over has taken place. When 2 or more genes are linked, then phenotypes with new gene combinations i.e. recombinants occur loss frequently than the parental phenotypes.

Probability of producing a male and female child 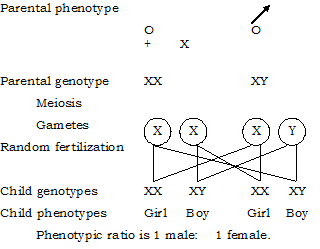 This shows the frequency with which recombination occurs. It demonstrates that linked gas are arranged linearly along the chromosome and it reflects the relative positions of gene on a chromosome.

High crossover values indicate that crossing over has occurred and that the 2 genes are situated abit far from each other.

Low 2 genes are near each other.

These are the differences in characteristics between members of the same species.

Variations are due to:

Segregation of alleles so that each gamete has one allele for a particular gene locus.

When one studies the phenotypic differences in any population of species one sees 2 types of variation.

This is when there is a gradual change in a characteristic in a population of species from one extreme to the other and there is no sharp clear-cut difference between the individuals therefore there are intermediate. E.g. height, weight, intelligence, skin colour in a race, ear length, yield of milk and meat in cattle, number of maize grains on a maize cob, shape and size of organs.

When plotted, each characteristic gives a smooth bell shaped curve known as the normal distribution curve or Gaussian curve. 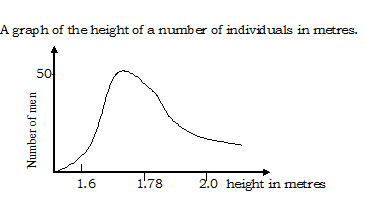 The characteristics which show continuous variation are brought about by:

These characteristics are largely not influenced by the environment