The many relationships between the members of a community in an ecosystem can be described by food chains and webs. Each stage in a food chain is called a trophic level, and the arrows represent the flow of energy and matter through the food chain. Food chains always start with photosynthetic producers (plants, algae, plankton and photosynthetic bacteria) because, uniquely, producers are able to extract both energy and matter from the abiotic environment (energy from the sun, and 98% of their matter from carbon dioxide in the air, with the remaining 2% from water and minerals in soil). All other living organisms get both their energy and matter by eating other organisms.

Although this represents a “typical” food chain, with producers being eaten by animal consumers, different organisms use a large range of feeding strategies (other than consuming), leading to a range of different types of food chain. Some of these strategies are defined below, together with other terms associated with food chains.

So food chains need not end with a consumer, and need not even start with a producer, e.g.

In general as you go up a food chain the size of the individuals increases and the number of individuals decreases. These sorts of observations can be displayed in ecological pyramids, which are used to quantify food chains. There are three kinds.

These show the numbers of organisms at each trophic level in a food chain. The width of the bars represent the numbers using a linear or logarithmic scale, or the bars may be purely qualitative. The numbers should be normalised for a given area for a terrestrial habitat (usually m²), or volume for a marine habitat (m³). Pyramids of numbers are most often triangular (or pyramid) shaped, but can be almost any shape. In the pyramids below, A shows a typical pyramid of numbers for carnivores; B shows the effect of a single large producer such as a tree; and C shows a typical parasite food chain.

These convey more information, since they consider the total mass of living organisms (i.e. the biomass) at each trophic level. The biomass should be dry mass (since water stores no energy) and is measured in kg m-2. The biomass may be found by drying and weighing the organisms at each trophic level, or by counting them and multiplying by an average individual mass. Pyramids of biomass are always pyramid shaped, since if a trophic level gains all its mass from the level below, then it cannot have more mass than that level (you cannot weigh more than you eat). The “missing” mass, which is not eaten by consumers, becomes detritus and is decomposed.

Food chains represent flows of matter and energy, so two different pyramids are needed to quantify each flow. Pyramids of energy show how much energy flows into each trophic level in a given time, so the units are usually something like kJ m-2 y-1. Pyramids of energy are always pyramidal (energy cannot be created), and always very shallow, since the transfer of energy from one trophic level to the next is very inefficient The “missing” energy, which is not passed on to the next level, is lost eventually as heat.

Three things can happen to the energy taken in by the organisms in a trophic level:

These three fates are shown in this energy flow diagram 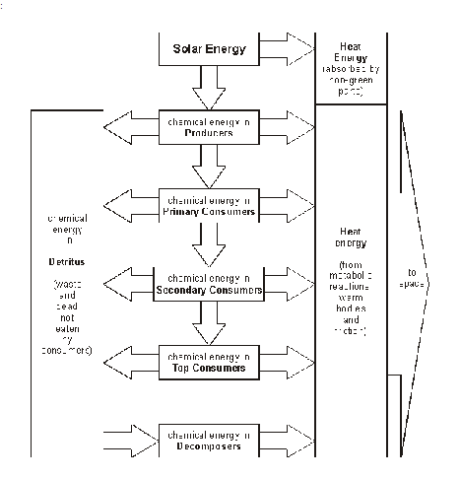 There are two groups of decomposers:

Detailed material cycles can be constructed for elements such as carbon, nitrogen, oxygen or sulphur, or for compounds such as water, but they all have the same basic pattern as the diagram above. We shall only study the carbon and nitrogen cycles in detail. 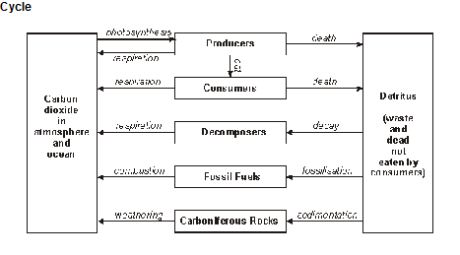 As this diagram shows, there are really many carbon cycles here with time scales ranging from minutes to millions of years. Microbes play the major role at all stages.

Microbes are involved at most stages of the nitrogen cycle:

Nitrogen Fixation. 78% of the atmosphere is nitrogen gas (N2), but this is inert and can’t be used by plants or animals. Nitrogen fixing bacteria reduce nitrogen gas to ammonia (N2 + 6H g 2NH3), which dissolves to form ammonium ions (NH4+ ). This process uses the enzyme nitrogenase and ATP as a source of energy. The nitrogen-fixing bacteria may be free-living in soil or water, or they may live in colonies inside the cells of root nodules of leguminous plants such as clover or peas. This is an example of mutualism as the plants gain a source of useful nitrogen from the bacteria, while the bacteria gain carbohydrates and protection from the plants. Nitrogen gas can also be fixed to ammonia by humans using the Haber process, and a small amount of nitrogen is fixed to nitrate by lightning.

. Nitrifying bacteria can oxidise ammonia to nitrate in two stages: first forming nitrite ions NH4+gNO–2  then forming nitrate ions NO–2gNO–3. These are chemosynthetic bacteria, which means they use the energy released by nitrification to live, instead of using respiration. Plants can only take up nitrogen in the form of nitrate. 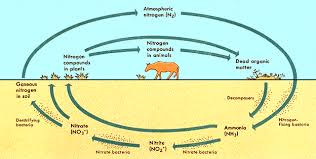