ALBIO5: CO-ORDINATION AND RESPONSE IN ANIMALS

This unit dwells on co-ordination in the nervous system

The process by which activities in an organism are made to function as an integrated unit.

In mammals, there are 2 major systems that convey information i.e. the nervous and the endocrine system. These systems co-ordinate all organs and harmonise all life processes.

The nervous system is constituted by a series of conducting cells called neurones responsible for transmitting electrical impulses from one part of the body to another.

The endocrine system comprises of ductless glands which secrete hormones directly into the blood system. The hormones are transported in blood to target organs. 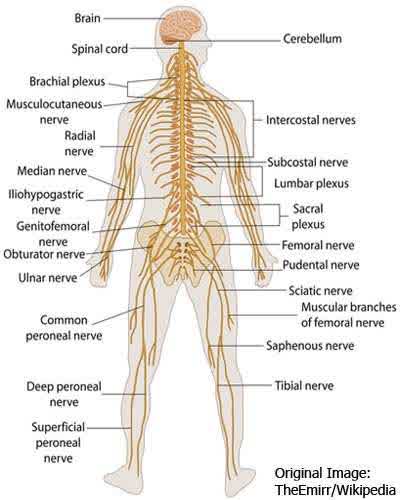 It has 3 main functions;

The nervous system is divided into 2 major parts i.e. 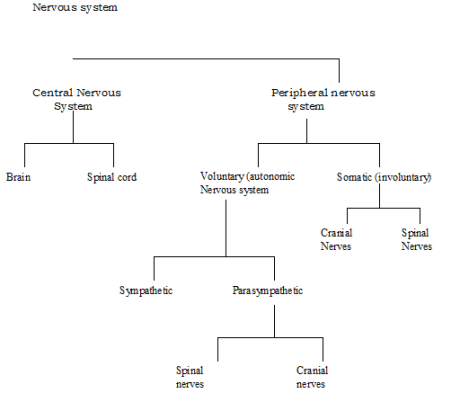 The CNS is divided into the spinal cord and the Brain while the peripheral NS is divided into the voluntary and somatic nervous system. It is comprised of highly differentiated cells whose function is to detect sensory information and encord it into electrical impulses which are transported to cells which are capable of producing response. All stimuli are detected by sensory receptors e.g. skin, eyes, ears and the information is passed on to the effectors cells.

These transmit impulses from the receptors to the central nervous system

Transmit impulses from the CNS to the effectors

Link the receptor and effector neurones within the CNS. All neurones contain similar essential parts

Function of the different parts of a motor neurone

It is the nucleated part of the cell and it is located in the CNS. It has all organelles which control all the activities of the cell.

Slender processes which connect the cell body with neighbouring neurones. They transmit impulses to the cell body.

Contains the axoplasm which transmits impulses from the cell body to the effector muscles. 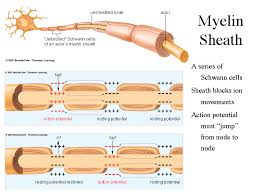 Protects and insulates the axon and speeds up the transmission of impulses.

Increases the rate at which the transmission of impulse takes places. 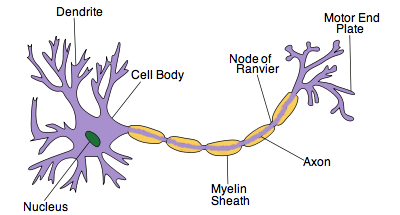 THE SPEED OF TRANSMISSION

The speed depends mainly upon 2 factors;

It is a fatty insulating layer around the axon. At certain intervals, it is absent and this forms the rode of ranvier. Generally, myelinated nerve fibres carry impulses much faster than non-myelinated fibres. This is because ionic charges and depolarization occur only at nodes of ranvier hence the action potential leaps from one node to another.  This is referred to as saltatory conduction and it increases the speed of transmission as ionic movements associated with action potential occur less frequently taking less time.

The thicker the diameter of the axon, the faster the speed of transmission. This is because of the greater area of the membrane over which ionic exchange can take place.

The nerve impulse is a small electrical event which is a result of charge differences across the membrane of a nerve fibre. It is based on ion movements through specialized protein pores and an active transport mechanism.

For a resting neurone, the potential difference that exists a cross the membrane of the axon is responsible for its resting potential. The resting potential is the electrical pd that appears across the membrane that is not transmitting any impulse. The membrane of the axon like any other cell surface is partially permeable the difference in permeability of this  membrane to Na+ and K+ sets neurones apart from other cells and gives them their special conducting properties.

The axon membrane is relatively impermeable to Na+ but quite freely permeable to K+. It also contains a Na – K pump which uses ATP to move the Na+ out of the axon and let in K+. The effect of this is to reduce the concentration of Na+  inside the axon because once they are pumped out, they can’t diffuse in. At the same time, K+ are moved in but they diffuse out again along a concentration gradient. As a result, the inside of the cell is left slightly negatively charged relative to the outside i.e. it is polarized and there is a pd across the membrane of -70mV which is known as the resting potential of the cell in its normal state.

When a neurone is simulated by stimulus, the axon shows a sudden and dramatic increase in its permeability to Na+. Na+ diffuse rapidly into axon causing depolarization, specific sodium channels or gates open allowing Na+ to rush in a long both concentration and electrochemical gradients. As a result, the pd across the membrane is briefly reversed and the cell becomes positive inside with respect to the outside. This depolarization lasts for about 1sec and the pd across the membrane is about +40mV and it is known as the action potential.

At the end of this brief depolarisation, the Na channels close again and the excess Na+ are rapidly pumped out by the Na pump. In addition, the permeability of the membrane to K+ is temporarily increased so that they move out along a concentration gradient.

It takes a few ms before the resting potential is restored so that the nerve is able to carry another impulse. This period is known as the refractory period which ensures that the nerve impulse travels only in one direction.

This is the recovery period required by an axon membrane before it can be able to transmit another impulse after a pervious one has passed.

This period involves repolarisation of the membrane and re-distribution of the ions. It is in 2 stages; 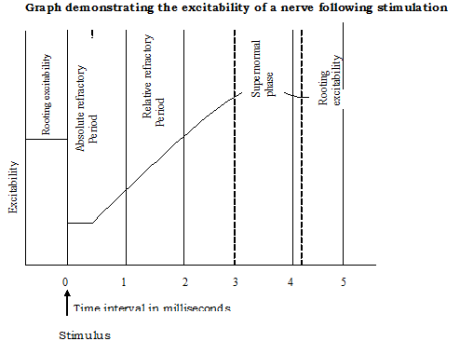 
During this period, it isn’t possible for an axon to generate an impulse even if the stimulus intensity is increased. The sodium channels are completely blocked and the resting potential has not been restored.

During this stage, it is possible to generate an impulse before the membrane completely recovers if a strong intensity stimulus is applied.

Importance of the refractory period 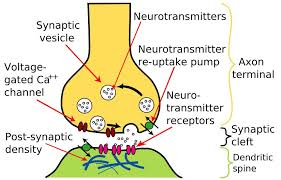 This is a junction between to neurones or it is a precise point where one nerve cell connects to another.

Synapses exist between fine terminal branches of the axon of one neuron and the dendrites or cell body of another neurone.

The most common transmitter substances are acetylcholine and noradrenaline.

Structure of a synapse

The membrane of the past synaptic neurone is ticked and contains numerous protein molecules to act as receptor sites for the transmitter substance. It also contains a number of channels and pores through which the ions move into the postsynaptic neurone.

There are two categories of synapses i.e.

The synapses have a few differences in structure but they function in the same way.

Transmission of an impulse a cross a synapse

The receptor sites undergo changes resulting into the opening of the channels.

Nat enter while k t leave leading to the depolarisation of the postsynaptic membrane. An action potential called excitatory postsynaptic potential (EPSP) is generated in the post synaptic neurone and is propagated as an impulse along the neurone.

After the transmitter substance has caused changes in the postsynaptic membrane, it immediately diffuses out of the cleft and is reabsorbed by the presynaptic membrane or it is hydrolysed by the enzyme acetylcholinesterase (AChE) also called cholinesterase to choline and ethanoic acid. These products are absorbed into the synaptic knob and are used to synthesize more acetylcholine which is stored in new synaptic vesicles.

The synthetic path way requires ATP which is provided by the mitochondria.

The hydrolysis of the transmitter substance makes its effects temporary. 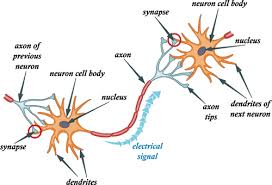 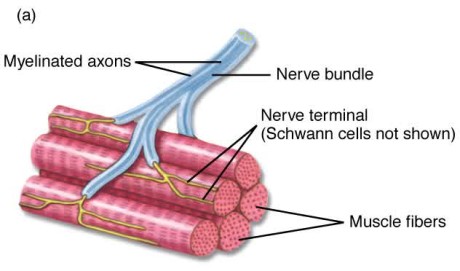