It is formed during the telophase stage of cell division and begins on cell plate. During the formation, a primary cell wall in formed which consists of cellulose fibres enmeshed at random amongst a variety of materials including pectic substances like calcium pectate, proteins especially enzymes and water filled spaces.

The secondary cell wall is laid down later inside the primary wall and consists of layers of closely packed cellulose fibres running in different well defined directions. Hemicellulose is also usually present to add more strength to cellulose. With this structure, the cell wall is able to stretch slightly when the cell absorbs water but when it reaches the limit of its elasticity, the cell wall resists further uptake of water by the cell and prevents the latter from bursting. Cellulose being a hydrophilic substance makes the cell wall freely permeable to water and this allows water to move easily from tissue to tissue without having to enter and leave every living cell along the way.

During deposition of the secondary wall, some areas on the wall remain unthickened and are known as pits. It is through these that thin strands of cytoplasm pass to neighboring cells and offer a means of movement of materials between cells. These strands of cytoplasm are known as plasmodesmata. Between adjacent plant cells is a middle lamella which actually consists of fused pectate walls of the 2 adjoining cells.

Depending on which tissue the cell happens to form further strengthening of the cell wall. This could be by:

Tissues-This is a collection of cells that are specialized to perform a particular function or functions e.g. blood, muscle, bone, xylem, phloem e.t.c. Cells forming a tissue may be of the same type e.g. the blood cells of blood.

Combinations of organs make up the system e.g. circulating, respiratory and digestive systems.

The systems make up an organism.

These are composed of two or more layers of cells. They form the lining membranes of organs and are concerned with protection, absorption, assimilation, elimination, movement and secretion. Some epithelial tissues have the secretory function and are important in the glandular tissue 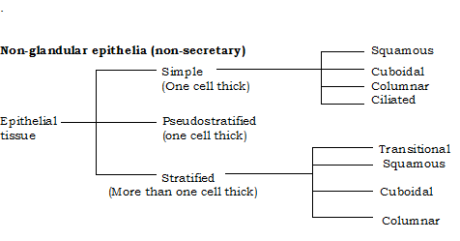 (i) Simple Squamous is found lining the vessel’s like the capillaries. It is found in the glomerulus in the kidney, Bowman’s corpuscle, alveoli lining in the lungs, also in the skin of the Amphibians. The tissue has cells which are flat and plate-like with irregular borders which are interlocking.

Its function is to allow materials to pass through it like in the capillaries. It also has a protective function. 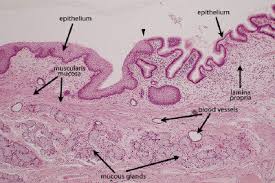 This tissue has cells which are Cuboidal in nature and appear square in section. It lines permeable ducts found in the thyroid glands, sweat glands, salivary glands, pancreas, and the collecting duct and also the kidney tubules.

Being protective and allowing materials to pass through it.

This tissue has cells which appear to be polyhedral in transverse section and rectangular in longitudinal section. These tissues occur in the intestines, stomach, line ducts of salivary glands and pancreas.

– Being supportive, absorptive and secretory 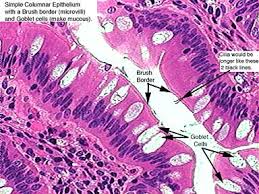 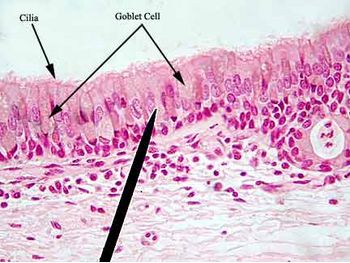 This tissue has cells of different sizes and the nuclei of these cells appear to be at different levels because all the cells don’t reach the free surface. This tissue lines the trachea and the urinary tract and it has a protective function

These have more than one cell layer. They are sub-divided according to shape and they are adapted for strength and protection. 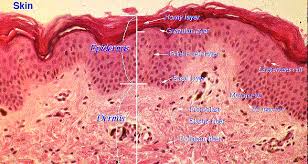 It is found is areas where there is bound to be friction. E.g. skin in the sole of the foot, palm, mouth and the skin have a protein keratin impregnated in the tissue.

Its function is to increase on the strength of the tissue and for protection.

Found in the seminiferous tubules in the testis where its function is for protection and strength.

Has a secretory function. They are 2 types i.e. exocrine and endocrine. The exocrine glandular tissue is one where the secretion is delivered to the free surface of the epithelium through a duct.

The endocrine glandular tissue is one where the section is passed directly into the blood stream. Endocrine glands posses no ducts and are called ductless glands.

E.g. mucus glands in the skin of frog and other amphibians. They secrete mucus.

E.g. part of the pancreas which secretes digestive enzymes and the mammary glands.

How the secretions are released from glandular tissue.

The secretions produced by the glandular cells are released in 3 different ways; 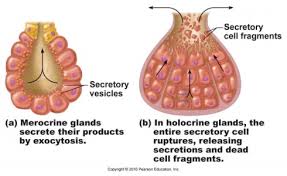 This is common in the goblet cells and the vertebrate pancreas, sweat glands and no cytoplasm is lost. The secretion is produced within the cell and is simply passed through the cell membrane at the cells free surface. 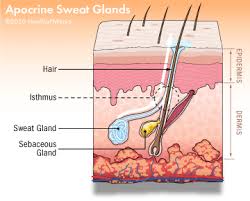 Common in mammary glands and the secretion comes out through a vesicle which constricts off the cell and a portion of the cytoplasm is lost.

The whole cell turns into a secretion e.g. in the sebaceous glands.